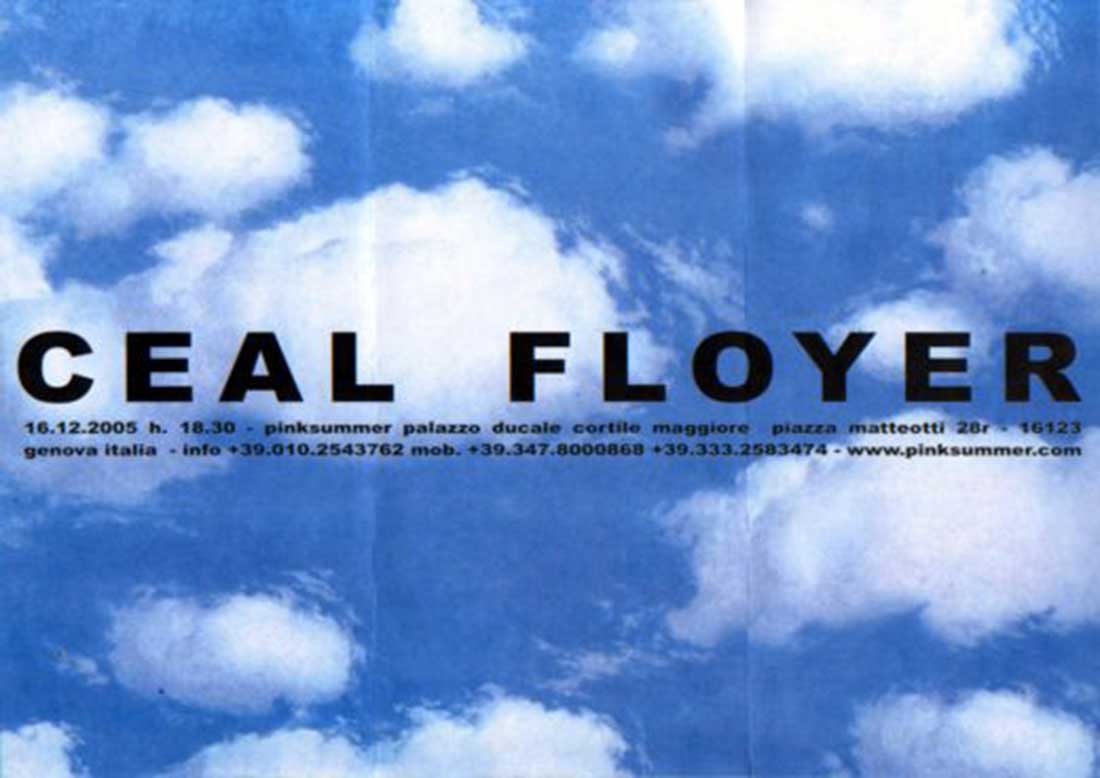 At the end of a dinner we were eating a fresh pineapple, when a friend, pretending to state a small, simple truth, said that eating a pineapple is something that gives the impression of being good. In fact pineapple can be enjoyed without causing guilt complexes: it has a nice shape, its juicy yellow is aesthetically agreeable, it tastes good, it gives a fresh feeling and it also seems to be detoxifying.
The comparison may seem risked if not delirious, but contemplating a work by Ceal Floyer transmits the same feeling to make feel good: her works not only are complete and perfect as a syllogism, but also produce the watcher a reflectionæthat could be assimilated to a sort of passive exercise for the brain.
Floyer rummages in the density of the obvious, she rinses it from every sort of relativism, reducing it to the essential, the idea or the universal, and then she rolls up the refined bundle of classical logic, like an inverse process, she re-names that obvious, she re-defines it, revealing the infinite latitudes and longitudes of thought, its indefinite and hermeneutic phenomenology and also its perverse and fictional side. It is not language representing reality, but reality that purifies itself to become the image of language.
The relation between sign and meaning sometimes becomes so intimate that the meaning lives in its referent. Other times Floyer, ignoring convention, dismantles signs, reiterating them to draw an unexpected aesthetic and decorative vein, often she flirts with double meanings. However every work has a meaning, perhaps an excess of meaning.
This sort of coincidence or absolute non-coincidence results in Floyer’s works showing, under the thin veil of irony, a smooth, beautiful body: they are works which let themselves being described, but interpretations slide over them. There are no wrinkles where parasites might nest. Sometime these works make you smile, but it is neither trick nor magic, unless, of course, you don’t consider intelligence as magic – since this is what we are talking about.
Nothing is as perceiving the obvious, giving it a new identity, moving toward its essence, or from what has been the established convention, to help breaking with habits; habits paralyzing thought with their fake reassurances without protecting us from the hits of fate and, on the contrary, making us even more hapless and vulnerable.
If our thoughts were more athletic, perhaps the ‘island of fame’ would sink with its celebrities, and also if good government should remain an utopia, at least we could long for a good government.
Let’s not say, then, that the art, every kind of art, is abstract and intellectual, because the abstract, if not the absurd, stays elsewhere, often in what we define as normality.
Ceal Floyer, at her third solo show at Pinksummer’s, shall exhibit two new works, other being available upon request.