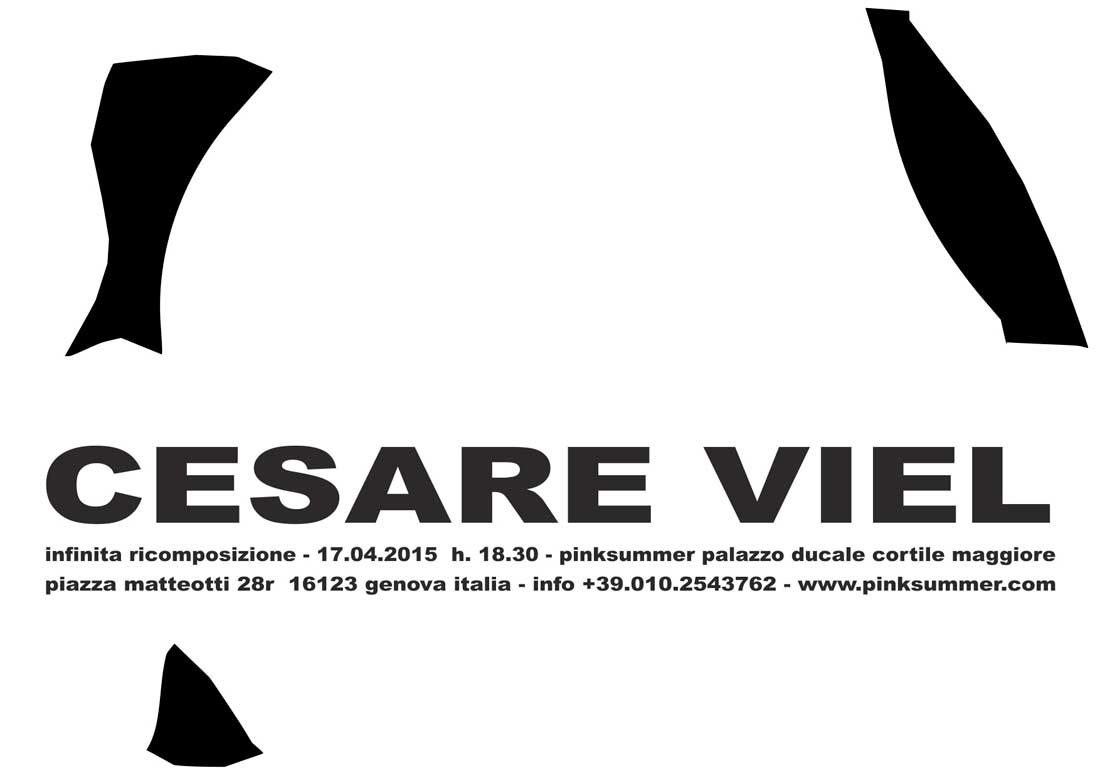 Pinksummer: In your third solo show at pinksummer, “Infinita Ricomposizione” (Endless Resetting), the demon of the writing, that purely or spuriously has been shaping your research so far in its length and depth, seems to have abandoned the plan of experience in favor of color. Your use of color, no wonder coming from Matisse non-mimetic à plats, can be assimilated to the use of concept you have made on other empiric planes. Resetting could also mean reactivation in this case. In What is Philosophy? Gilles Deleuze and Félix Guattari claim that the concept is a matter of articulation, of cutting out and putting together, given that concept is never easy. We would think that primary (easy?) colors too do not exist if not within to the approximation/simplification of language. Why did you decide to start from Matisse such a linguistic/sensory pathway?

Cesare Viel: I can say that Matisse is bound to my biography, after all. He was the first artist I accidentally discovered at school, on my own, when I was around thirteen, and the one who opened my eyes to a whole new world: 19th century Avant-Garde art. This is therefore, first of all, some kind of return to the origin and a way to deal with that “long love story” left in standby, waiting to be reactivated, nevertheless always there silently there, sort of an hidden track. From time to time Matisse has emerged and disappeared in my mind, overhung by other stimuli, other different and apparently more contemporary needs. Eventually the right moment has come. Now the “Matisse machine”, with all its energy, its power, has been started inside me and it is back. It is a body in action that gives motion to the entire project. It is a new composition plane, indeed an endless series of composition planes. First of all an installation system and a performance process. A becoming, with a wide margin of freedom and aware indetermination. A new limitless background, same as what “Matisse machine” made happen its way at the beginning of last century. Obviously my new project at pinksummer is not a simple homage to, nor an articulated bunch of more or less philological citations. As a matter of fact, it is a strong, new challenge for me and my research in operation, in motion.
It is an infinite dispersion and resetting. Indeed, in this new exhibition no writing is presented as image and recognizable practice connoting my work, that could not have happened any more, but it was transformed into something else and it has become functional to the entire project in a different form. Some colors, some shapes, some materials, completely new to me, have arisen, articulated and combined together on various actual planes of reality. And all has become possible.

P: Doesn’t language, also when its edges are made irregular and let us to catch a glimpse on other possible worlds, the other worlds, the worlds of the others, act like an umbrella protecting us from the endless fragmentation of the world? Isn’t language a system that always necessarily implies figure and background, subject and object, center and margin? Doesn’t naming mean to delimit in order not to be overwhelmed by things, even if that was only a red color?

C. V: Yes, language is a toolbox, a multi-function tool that accompanies us all the time, it is embedded in our life practice, it shapes our existential and relational background. I like the image of language as an umbrella and I would add that of language as a background. Language is a bit like color. Sometimes it reveals, other times covers something. Same as color, human language can be at the same time an instrument, a possible grid, a resource, an expression, a limit, a desire, an action, an obstacle or a connection between different realities. I really love the idea of letting a red take over me, just as a sentence or a sound and a dance could do too. Performing a red, a yellow, a green, a black, a white and so on.

P: One of Wittgenstein Remarks on Colour goes like “only a few people have ever seen pure white. But then does the majority of people use that world in a wrong way? And how can one learn its correct use? They figured out an ideal use by conforming to the ordinary use. And this does not mean a better use, but a use refined in a specific direction, in which something has been taken to its extreme point.”
In a letter on The Dance, Matisse wrote that he was looking for: “a beautiful blue for the sky, the bluest among the blues (the surface is colored until the saturation, meaning until when the blue, the idea of the absolute blue, finally emerges) and same for the green of the ground, for the vibrating vermilion of the bodies.”
Both Wittgenstein and Matisse seem to give for granted the existence of what we could define ultra-color and also of a point in which color (determined from its the extreme boosting, from the highest saturation) can be transformed in ultra-color and therefore in something of ultrasensitive, without becoming transcendent or metaphysical though. Ultrasensitive dimension is an exercise and a possibility of the present, could that be defined a marking out exercise?

C. V: To take the rule – no matter what rule – to its extreme consequences, to its point of resistance, until its possible exhaustion. That point is to me as close as possible to some sort of silence, of pure presence. Some kind of empty concentration, like the breath, it can be a vision too, but that is a concrete, real, actual experience, here and now. That is not a metaphysical elsewhere but just something – an experiment – which border is taken to its extreme point. It is a practice of the present time, a continuous exercise of movement and wait, a rhythm, a form of awareness. The full color, at its highest saturation, is a case of such kind: a rule that is pushed to its maximum point. What is beyond? What can be seen or felt then? Beyond? It is not up to me to answer, I am interested in starting a process that aims to get to that point of suspension, wait, tension.

P: Hume affirmed that reality is resolved in the relation elapsing between impressions and ideas and that no object reveals the causes that it can produce or the effects that it could rise through its qualities as they appear to the senses. For example, from water’s transparency or fluidity and no experience of it, it would be impossible to desume that water might cause drowning. For Hume, outside experience all it is fantasy and conjecture. As a result, color could be interpreted as nothing but a quality of things, just like water’s transparency or fluidity. However, in painting color stops being a quality and demonstrates that can easily manage to represent water’s quality and transparency without possessing its transparency. And here we would think at another observation by Wittgenstein about green glass, transparency and painting in order to orient ourselves in the elsewhere of an exhibition where Matisse’s color and shapes, indifferently drawn from his figures and background, have been turned into large felt mats to be handled like playing cards. They say that from his native Picardy Matisse assimilated such a great knowledge of textile that he was able to make himself the emperor great red cape for the end scene of Stravinskij’s Le Chant du Rossignol for Diaghilev Russian ballets. And when he was remotely designing his large decorations for Barnes Foundation he wrote: “In order to compose everything and obtain something living, singing, I couldn’t help fumbling, by restless changing my color sectors and my blacks”.
Felt is a fiber without weft and without warp, it is not woven, it is molded, felt is an archaic artefact dating back to 9000/8000 b. C. with a major role in the history of conceptual art practice too. Can you tell us about “Infinita Ricomposizione”?

C. V: The installation will mainly focus on an horizontal composition plane. On the gallery floor, various felts will be laid in several shapes, dimensions and colors, according to a precise and continuously renewed, dynamic order. Across the exhibition time, I will move the felts on the floor in an evident processual fashion. The felts on the floor will be arranged according to similarities and differences and will form free connections with the gallery space too. Also, the felts on display compose a reference to the original matrix shapes. I did not invent them, as they have been “traced” and cut out from background and figures accurately selected among Matisse’s works. Colors too have been chosen thinking to some recurring Matisse colors. Obviously the whole system, the shapes, the colors, the felt itself used as a prop, form a free role play. The experience of chance, the emotion of unpredicted, some sort of relational geometry are the essential ingredients of the project. Why felt? Beside starting the “Matisse machine”, I felt like playing with other planes of composition and reference: the memory of that material in the history of conceptual and performance art from the second half of 19th century, from the Sixties and the Seventies. I obviously refer to Beuys, but most of all two names of artists sharing a different use of felt as an important element in their practice emerge: Robert Morris and Vincenzo Agnetti. So eventually everything composes an indented “family group”. A set of various qualities and experiences that overlap and intersect each other. Also, as I already mentioned, this exhibition will feature a substantial performance practice consistently in progress, not completely planned and preventively programmed. In fact, this will be an exhibition of time through time too. During the opening, so as in the following days, some micro-events will happen, also without prior notice. Some of them could even only be though and communicated verbally or in form of written notes dropped in the gallery office, or sent via mail, even when the gallery is closed and not necessarily during its opening hours. During the opening there will be a collective action (performed by me and some others performers) around the pavement felts. Sometimes a movement of the felts will happen by means of some short movements, a “dancing behavior” more than a proper dance. I will bring to the gallery, gradually, across the time, some sound interventions, some songs, some new phrases of mine, purposely composed and said, repeated, destructured according to a personal resetting method. Audio tracks that eventually will contribute to make up a whole fragmentary sound texture for the show, for the elapsed time. Just like some sort of “collage” of sounds coming from a corner or from behind your shoulders, that catches you and floors you.