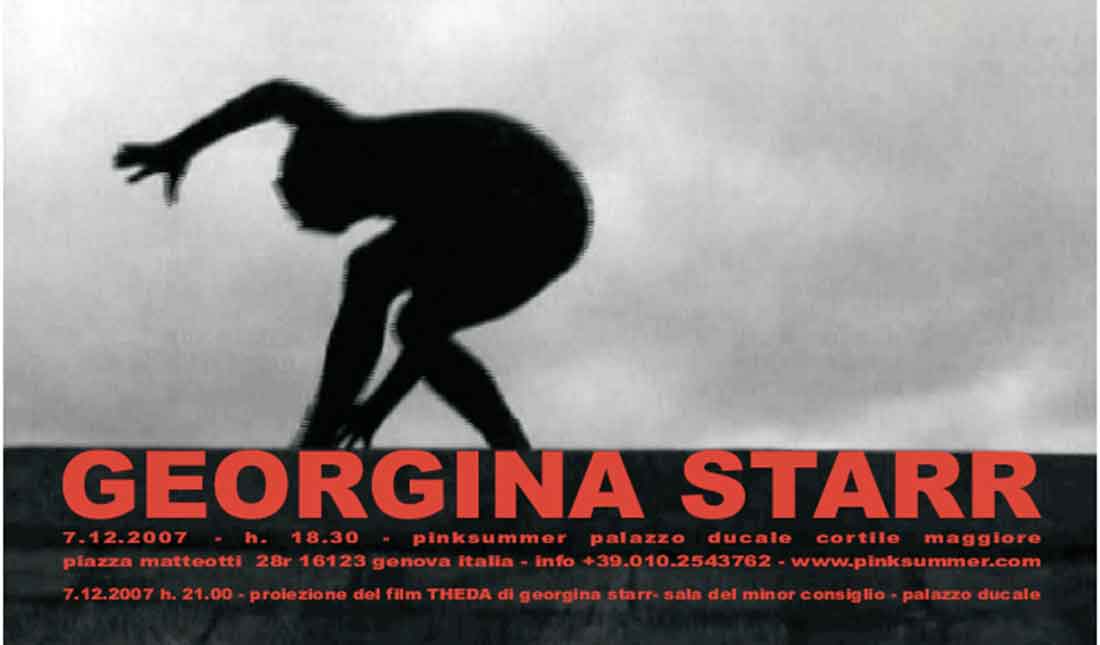 Georgina Starr has been defined as a cultural archaeologist, but her recent film “Theda” re-creates the silent actress Theda Bara without adding anything to the objective knowledge of the historical character of the star of the silent movies, perhaps the first sex symbol of our age. Starr’s work extends the experience to the possible through an imagination that is not caprice, but urgency to cross the limit, to abandon an objective vision to return a subjective view, that of Georgina Starr. Her representation of representation is like theatre in Shakespeare’s theatre, it has nothing of post-modern, but is rather baroque, admitted that baroque is a meta-historical category. Starr’s Theda has the sensual and illusionistic emphasis of still life: splendor and misery coexist in the chiaroscuro excesses of her film. “Theda” is an allegory of Vanitas.
In the project “Theda” the figure of the double takes on the ambiguous and disturbing character of death and expulsion, with several references to psychoanalysis. In Theda (Prelude) the subject seems to multiply rather than get lost in an infinity of expressions, roles, interpretations that reflect the disintegration of identity. Someone once wrote “he who sees the double sees his death”: in the narrativity of the interlude Theda is decomposed with horror in the two-faced portrait that foreshadows the old age.
Theda lifts the veil of the time. The figure of the double returns in the invitation of the recent show at Tracy Williams ltd. in NY titled “The Face of Another”, in which a photograph of the artist is presented next to one of her mother in the 70’s: dressed with the same clothes, hair combed in the same way, she seems to reflect one in the other in the cunning similarity of a smile for the photographic pose. The veil of time is lifted to confuse.
Baudrillard wrote there is no obsession, neither alienation until a dual connection with the double persists, they come up with the interiorization of the double, of the soul that, suggesting a mirroring, secludes the subject in itself. The shadow of the double is insanity, oblivion, loss, or simply the non acceptance of becoming.
In respect to history Starr gives back an atmosphere in which psychology is presented in tight relation with mysticism and the magic and as occultism was considered a key to understand the alterations of personality. The Fox Studios in Hollywood promoted an exotic and evasive identity of Theda Bara, who, without having ever seen Egypt was called “snake of the Nile”, encouraging the actress to discuss of occultism also during interviews. But it is not only for philological love that Starr presents Theda in an environment initiated to mystical symbolism, like in the scene of the spiritualist séance, but to connect mystery to the phenomenon of the dissociation of the self.
For her third solo show at Pinksummer Starr will present a version of Theda (Prelude).
In this single-shot filmed performance, the artist runs through a series of codified expressions akin to the silent era performer. As the rhythm of the performance takes hold, it seems as if her face is being held hostage by the gestures and expressions she is trying so precisely to communicate.
Starr will also present a series of sculptural works taken from classical representation of the female ‘muse’. Like Theda Bara through the loss of her films, these early representations of ‘womanhood’ were frozen still lives; the embodiment of metrical speech and idealized/idolized form. The sculptures will function as perfomative objects in the exhibition.

On the 7th December the live film version of Theda will be presented at Palazzo Ducale.

For each screening of the film Starr invites a different group of musicians to respond to the film and accompany it live. This evening Theda will be accompanied by Italian musician Domenico Caliri.