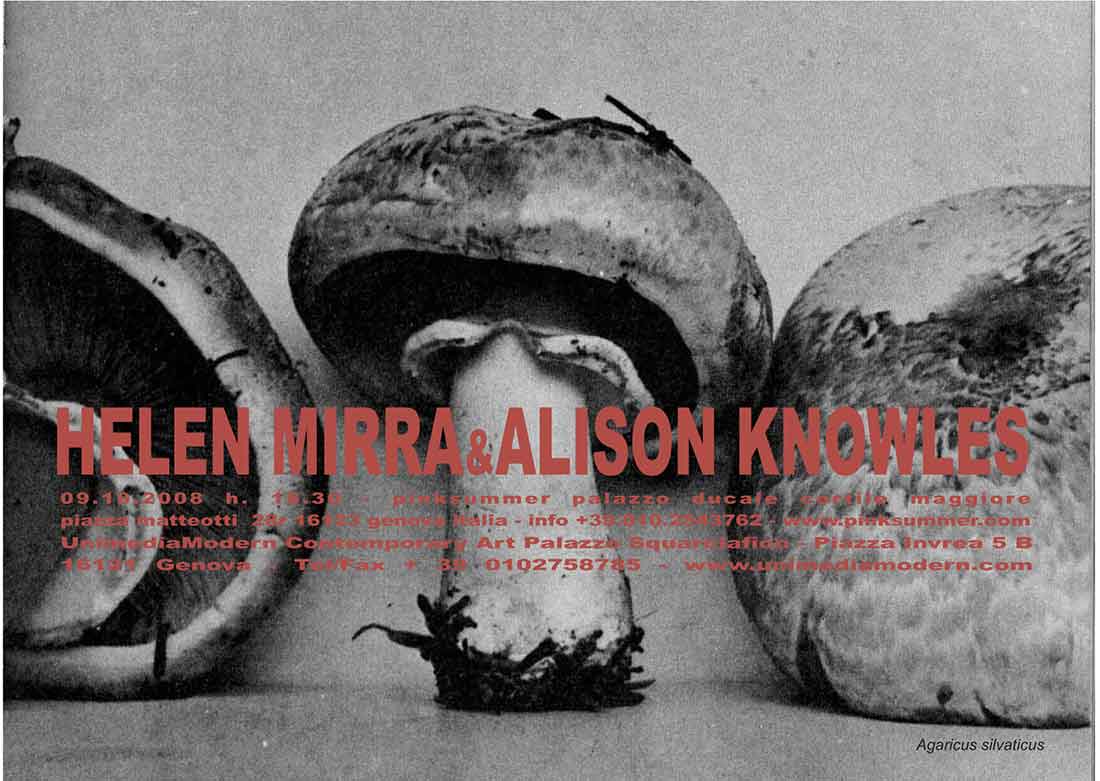 This curious exhibition has an unusual history, especially concerning pinksummer, which is more oriented towards hosting solo shows – never more than four per year – , and as a matter of fact our initial request to Helen Mirra was for a solo show, and she responded with the proposal for a two person show with Alison Knowles. We answered that we knew her, besides books about Fluxus, also because right in Genoa Unimedia had presented the work by Alison Knowles in the past years with several different solo and group exhibitions. Everybody liked the plan, and the double solo show of Helen Mirra and Alison Knowles will open on 9 October, and for this special occasion Unimedia-Modern and pinksummer will act as a single place. The date coincides with the beginning of the mushroom hunting season in northern Italy.
In addition to being an artist, Alison Knowles is well known as an experienced mushroom-hunter (and exceptional cook). And we have always thought of Helen Mirra as a landscaper, when she makes indexes, apparently objective, taking them from texts by Dewey, James, Sebald, to typewrite them on 16mm cotton bands; when she organizes her herbariums with plants and flowers from the Arctic Circle and makes sculptures with items of clothing and rocks, imperceptible camouflaging with painting the trace of lichens, and telling us about weather and its declinations; when she recreates a portion of sky with the modularity of Buckminster Fuller; when she evokes the tundra, the snow, the sky with pallets, reminding us that they were woods.
In front of nature, of landscape, there is always the author, and the author does not describe, but he tells an experience. In every work by Helen Mirra there is always journey, mapping. At the centre of Alison Knowles “events” there is always body, and in her objects-sculptures there is experience, and experience becomes the gateway between man and world, between micro and macrocosms. A representative work by Knowles in this sense is “Bread and Water”, in which the bread as the symbol of culture since the Neolithic, home baked by the artist and photocopied with one of the first printing techniques, reminds the Earth and its fluvial system.
Culture must be assimilated to nature cycles, and from here the attention of Helen Mirra and Alison Knowles to the contemporary ecologic conflicts and the thin anti-mercantilist vein that pervade their works and evoke the original Yankee ethics of the “low living high thinking” (Thoreau affirmed that we must ask the cowherd or to the partridge the taste of wild sorbas, because their precious essence gets lost on the cart that transports them from the hills to the markets in Boston).
Poetry and music are part of this process. The artists use few synthetic elements, substantially poor materials that, with the research of the correspondences, relate to the relationship with man and nature and with it the idea of responsibilities, a responsibility that, before becoming collective, has to be individual. In a monograph on Alison Knowles we read that the artist, at the request to define Fluxus, she answered that Fluxus is the claim of the individual of being a creator of meanings. Naming means in some way creating, seeing in another way, seeing for the first time, with a look cleaned from any preconceived representation. Even when they work in studio, these two artists seem to be confronted with open territories, measurable with a compass. In this sense, maybe it will be a European myth, but we like very much the American pragmatism that seem to never forget that geometry, before being a science to verify theorems, was meant to measure fields and canalize rivers.
Follows a text by Alison Knowles & Helen Mirra:
Agaricus silvaticus. Identification marks: A. silvaticus is a collective species. Its variants differ from A. placomyces in having essentially reddish brown threads on the cap instead of gray to grayish brown threads. In both the stalk is naked below the ring. Edibility: Edible but not recommended because too many people confuse it with A. placomyces and A. hondensis, which very closely resemble it, and are known to produce gastrointestinal upsets. When and where to find it: It occurs generally throughout North America, but is sporadic in its fruiting habits. It and its variants appear to be most abundant along the Pacific coast in the fall. [The Mushroom Hunter’s Field Guide, Alexander H. Smith, University of Michigan Press, 1958.]
Under the roof of the cap of this common mushroom, Helen Mirra and Alison Knowles share an approach to artmaking which is straightforward and in sync with the natural world. Mirra and Knowles tread lightly in the forest and the studio, working with found materials, not to uncover anything, but to experience the everyday, and to understand this very ordinariness as sublime.
Alison Knowles (b.1933, New York City) is known for her soundworks, installations, performances, publications, and association with Fluxus. Along with John Cage and Dick Higgins, in the late 1950s she joined the New York Mycological Society, frequently hunting for wild mushrooms since. Knowles presents two collections: Event Threads (objects lined up and hung down then dipped in paper pulp) and A Rake’s Progress (made with a discarded garden rake pulled through paper).
Helen Mirra (b. 1970, Rochester New York) makes work in varied scrap material, often concretely engaged with poetry, informed by concerns related to the conflicting ecologies of the modern world. Mirra exhibits a series of photographs of birdhouses in the woods surrounding the psychiatric clinic Waldau near Bern, Switzerland.
This exhibition is scheduled to coincide with a prime mushroom hunting season.