Koo Jeong A – Stars Above the Tree 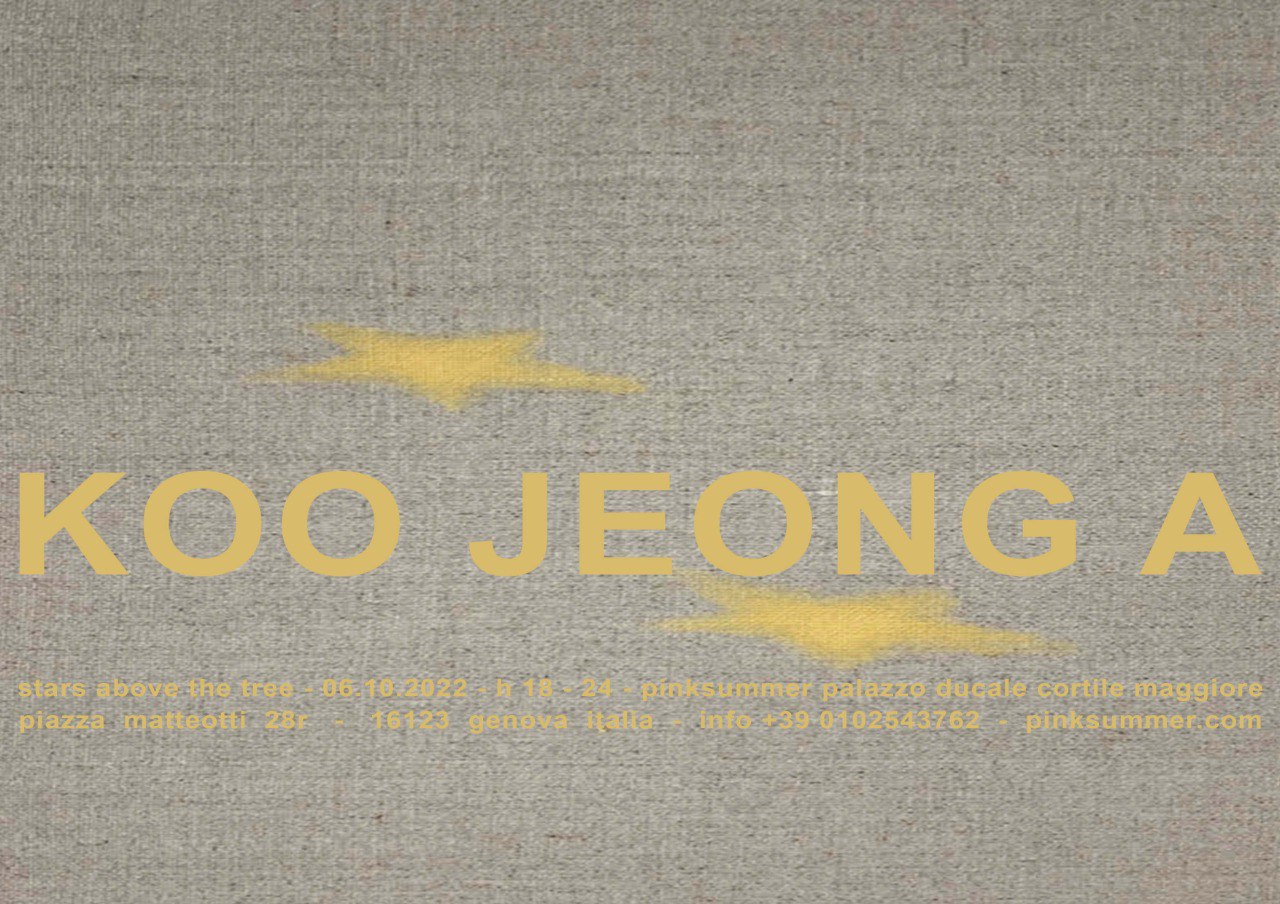 “New Seven Stars paintings are continuity of the series of SS exploring (space, world, universe). Space related to the architectonic imageries, World related to the deeper topic on Earth, Universe related to N dimension”, wrote Koo Jeong A concerning the paintings on linen canvas she will present in the new solo exhibition at Pinksummer. The title of the solo exhibition is Stars Above the Tree, a title that somehow suggests that the new Seven Stars paintings, beyond being a continuation of the previous series on stars, seem connected in some way to the small precious drawings on rice paper of trees that have an exquisitely human vibe Your Tree my Answer. With the vivid astrality of this exhibition it seems clear that the artist feels the need to draw an imaginary line in the sky. Already in Koo Jeong A and Tomás Saraceno’s 2020 exhibition Nocturne at Custot Dubai gallery, made in collaboration with Pinksummer, we referred to the fact that in our time 80% of the world’s population lives under a sky polluted by artificial light that makes stars invisible. This is one of the most widespread and underestimated forms of environmental alteration. We can say night is disappearing, and since the biorhythms of beings, including humans, involve the alternation of light and darkness, if the sequence stops being well synchronized the environmental balance is in danger of shattering. Recent studies show that altering photoperiodism affects migratory flows, mating rituals, predator-prey relationships in wildlife and that of plant photosynthesis. Stealing the dark from the night alters our perception of the world.
In the large canvases of the earlier Seven Stars series, monochromes in daylight and figurative paintings in darkness, the reference to Earth’s photoperiodism was somewhat mimetic and acted upon. Paintings were made by spraying canvas, using the stencil technique, with phosphorescent pigments that charge in the light to become visible in contrast to the darkness.
The new Seven Stars paintings are acrylics on unprepared linen canvas that doesn’t refer so much to dimension itself, but to a curious poetic deviation of what in physics is called degrees of freedom: degrees of freedom theory determines the position and the motion of a material point in the space of possible configurations. The perspectives of the new Seven Stars paintings step out of Kantian Euclidean space and refer to an arbitrary number of dimensions. If the viewer penetrates this space of imagination, they understand that Koo Jeong A’s Seven Stars don’t stand over contingency but are part and influence it.
In these paintings, the stars aren’t in one dimension but are themselves the dimensions: they appear as mathematical objects discharged of all realistic excess, analytical and synthetic at the same time, grasped with the light and immediate apperception of an emotional intelligence apt to draw the connection between the Earth and the sky. Koo Jeong A’s stars are mostly above the trees. Between the trees and the stars, space has a variable curvature; it is like a space in which the observer and the observed appear intimately linked. The gaze that observes these stars is an ontological gaze that informs and participates in the dance of celestial bodies, one would almost venture that Koo Jeong A has imagined an observation in her paintings other than the human gaze. It seems that the most extraordinary capacity of the plants is precisely the vision. Trees, plants have a very clear perception of light and they know how to intercept it. It is through this keen sense of light that trees know when to sprout and bloom. As regards light, trees know how to recognize intensity and wavelength. Everywhere on the surface of their bodies, but especially on their leaves, trees are covered with light-sensitive sensors, the photoreceptors. The leaves of trees are covered with many tiny eyes.
Koo Jeong A’ stars are seven as the planets that have been associated with the plant world since antiquity, from classical Greece via Cornelius Agrippa to Marsilio Ficino with the theory of signatures to Rudolf Steiner, the father of biodynamic agriculture, who in 1924 devoted a series of nine lectures to the action of the stars and the planets on terrestrial life. Not surprisingly, all the cultivation activities of the tradition were carried out following the lunar calendar.
The paintings in the new Seven Stars series like the trees in Your Tree my Answer orbit in the same dimension of care, which in this case it is the care for the environment, for speciesism prejudice, for each and every virtue that all of the seven planets dispense on Earth.
Steiner wrote mantric verses to understand how planetary action enters the plant life of the tree by also connecting them to the corresponding metal soul. We would like to conclude this statement with the mantra Steiner dedicated to the birch tree and Venus.

Through the virginal sparkling white birch

Which has shallow roots and drinks much light:

“O man, work on your soul

Marvel at the beauty of the world.”