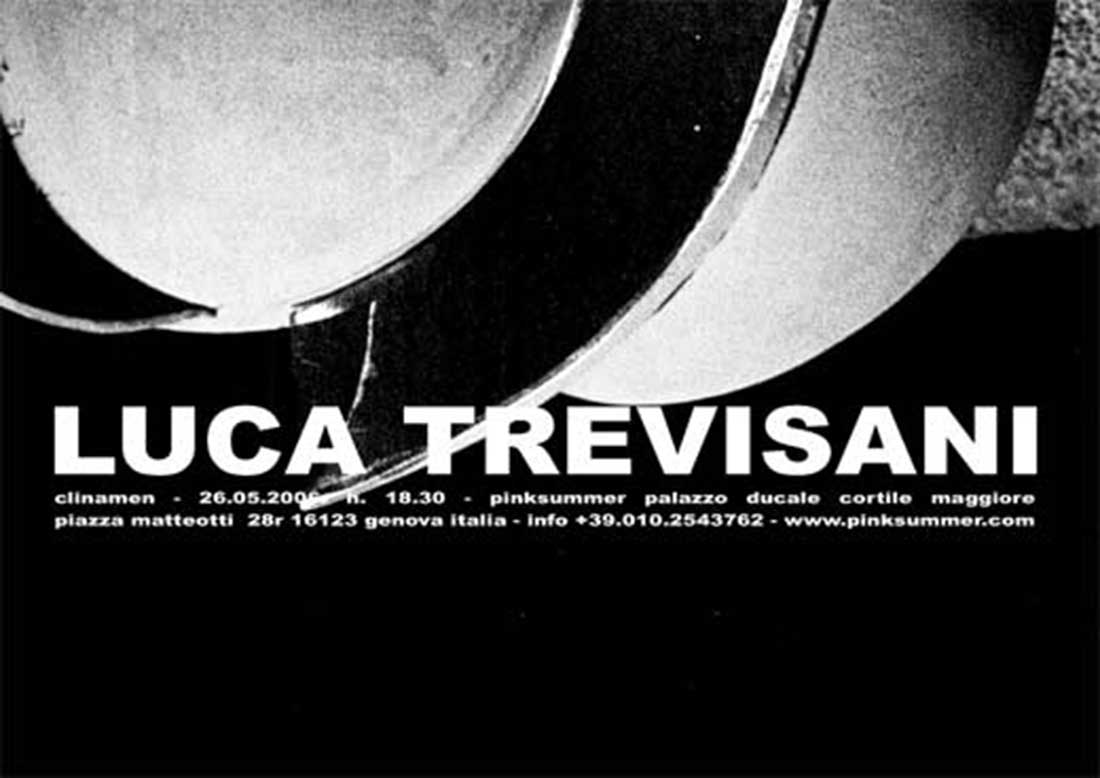 Pinksummer: The project you are showing at pinksummer is titled “clinamen”, the principle of declination, introduced by Epicurus in the ancient atomistic system, whereby atoms, during their fall in the infinite void make a detour at every time and in every point of space for a minimum interval from the straight line, thus shaping composite bodies. Epicurus said to be vain the speech of the philosopher who does not cure any human passion and that philosophy is of any beneficial if it doesn’t make free from the soul illness.
The epicurean physics is strongly aporetic just for the introduction of the clinamen theory; actually, physics reason were less important than moral reason: in ancient atomism everything happens out of necessity and in a universe submitted to fate there is no place for human freedom and the implementation of the moral values which Epicurus was so fond of. The title you gave to the project aims at opening an ontological space to an idea of existence that coincides in a antillusionist way with your formal rigour?

Luca Trevisani : I am more and more interested in the enquiry of the rules emerging in a communitarian situation. To do so, in every work I feel the need to prepare a laboratory where to rebuild them, to test them, to put them under examination, to keep them under control.
What you call ontological space for me is a space in which I try to obtain results, handling aesthetics as an effective science, the history of ideas as an instrument, shape as an arrival point. I find that speaking about existence is unnecessary for showing the human data, for this reason sometime I worked with a well tuned group of persons, only thinking on how to reproduce the physic encumbrance.
This time I wanted to work with objects, like the theatre of Bauhaus of Russian avant-gardes used to do, looking at the shapes of the skate parks like those of a perfect theatre cavea, and seeking for the objective correlative more appropriate to my needs.

P: The image you chose for the invitation refers to Francesco Lo Savio. Lo Savio like Epicurus had a great faith in reason and in the function of aesthetic and intellectual engagement to offer solutions to the ineluctability of human destiny. Both of them were looking for shelter in reason in order to defeat the nonsense of a anti-teleological universe.
Like Epicurus’s “atarassia” is not inertia, but the hard-fought conquest of happiness through logos, the short, but exceedingly intense rationalistic (and thus utopian) journeyof Lo savio tends to harmonize the relationship between man and environment, not casually moving from paintings “spazio-luce”, passing through “filtri”, “metalli” and “articolazioni totali”, he gets to the project of the dwelling unit “maison au soleil”, following the energetic dynamism of “luce-vita”.
A jutting out rigorous and deductive tension, that from bidimensional space of painting, passing through sculpture, aims at the real to circumscribe the evil, for self-defence. The verses of De rerum natura of Lucretius come to mind: “The rays of sun cannot disperse the dark and this terror of soul, but only the study of truth, only the light of reason”. Both Lo Savio and Lucretius realized that the faith in reason is not a sufficient shelter because it stays tragically silent when the being becomes nothing. Tell us about the dialogue at bay with the rationalistic attitude of Lo Savio.

L.T: I am led to think, and thus to conceive my works, like a series of levels of stratified layers, in which the link is the result of arbitrary and contradictory reasoning, but that are able to lead to effective visual instruments. Is this what I am interested in.
The light and the dynamism suggests by the works of Francesco Lo Savio fascinate me with their musicality. I say musicality because it means to understand the life of matter, and existence in general, like a continuous flux, made by pulsations of different intensity. The musicality of a song is complex and fleeting; in the end of the song we can take a still as we can do with an image, both moving and still. We cannot reduce a sound to minimum entity. This is very important, because it forces us each time a to a research, to an active and uncomfortable relationship with things.

P: Once you affirmed: “My work is a plastic enquiry of the thin limit that runs between the pleasure of sharing, the certitudes we derive from comparison and the violence concealed therein. Sculpture allows me to draw the hypothetic reality where to verify my analysis, where it is pivotal the autonomous shape that matter assumes, giving substance to the images of thought”.
You speak about a double experience, both concave and convex: if on one side the aesthetic space has a autonomous formal entropic expression that denies the representation, on the other side it sinks his roots in social experience and involves the concept of representation. Tell us about this dualism.

L.T: The best communication is the one which seduces, not the one aiming at spelling out everything, but that made of approaching and piercing draughts. I believe in an aesthetics of the fragment; the fragment is a germ of something that counts much more of meaning, it is the obsessive push to be complete.
The condition of fragment intensifies sense, it sharpens the look of the observer, asks him to build the sense of the things, joining hints spread in space. I talk about hints because I am led to read and live the environment with a sensibility that I would call “noir”, since I do it putting together limited details and stiff frames to circumscribe very defined atmospheres.
To reduce the look to a sequence of essential details means that is unnecessary a ” muscular sense” to have a relationship with the world. I am convinced the viewer should consider himself a stranger in front of the object that he finds, always. It is the only way he has to participate.
I want that my works and videos disappoint the sight seeking or awaiting an event, because I am interested in putting the viewer in front of a presence, and no more. The trend to abstraction eliminates the possibility of strong moments and reinforces the sense of distance from things.

P: You affirmed to share with Florence Henri the compositive obsession linked to the spherical form. As Guido Molinari observed in a recent article on Flash Art Italia, the geometric shape of sphere, with its precise borders in respect of what is outside seems, in your work, a metaphor of individualism and in this sense a representation of sociality of our time, where links are easy to build as to dismantle, they have no emotional anchorage, all is liquid and fluxing and the balances are awfully temporary.
You have the individual and the void, but there is no tragic sense because, as Bauman says, our time has changed the big banknote of happiness with a handful of coins of small pleasures, fast to come as to go, which help to keep out of our mind the worry of happiness. The temporariness, and casual concretion are recurrent in your work: we can still believe in the res publica?

L.T: I don’t know well how my obsession for spherical shape grew. The sphere is the Leibniz monad, it works like a synecdoche, ending to put in evidence a the need of a connection between the sides of the world that do not provide for it.
I look at the spheres thinking of the thread that connects them, making a necklace, or a net, in all cases a unit. I wonder about its presence or necessity. I think it is important not to come to a conclusion. If this thread exists, the more elastic and transparent the better: it should be potential and not permanent, it should be suggested, not given as expected.
All processes contained in the show began with the building of an inclined plan, where I had some ice spheres slide. The ice spheres, while sliding, melt; they are only for a moment in their life like water molecules, for a instant blocked in a geometric shape, to go back, due to the clashes with other spheres and the atmospheric warmth, to the liquid state, that in some way is collective, because all water turns back to a sole undivided substance.
However, I want to clarify that I am not interested in the narrative side of this process, or in the fact that in a given period of time action consumes itself. I am interested in the output of energy, real and imaginary, that occurs during the clashes, the collective work, the changes of course.

P:.Lipovetsky says that skate-boarding, windsurfing are sport illustrations of “glisse society”, which fast slides on surface, without penetrating. In the video, one of the works exhibited at pinksummer, you launch ice spheres along a skateboard ramp. Once we heard you saying that Lo Savio is a skater: please explain.

L.T: I was interested in testing the behaviour of a group of spheres long a slanting surface.
Looking from outside at the video I was creating I thought I was observing Lucretius’s thought illustrated in a school documentary directed by Ed Wood, with an aesthetic of the Sixties. Later, being conscious that from the formal point of view I was leaning to Lo Savio’s work, because it is a support, I only could bring this dialogue to its extreme consequences, mixing cards with courage and consciousness.
Lo Savio’s theories on light and space confirmed my intuitions. A cast of Maison au soleil, looked at superficially, resembles a miniature skatepark. A sphere of ice is a Filtro, it’s a portion of space that condenses and analyses the light crossing it.

P: Describe physically the Clinamen project, as it will appear in relation to the space at pinksummer.

L.T: The project consists of different objects and a video. The video has been shot in a skatepark, having several dozens of spheres sliding along artificial slopes, recording images and sounds.
The sculptures visualise parts of the video, and they are obtained moving from the sculptural work of Lo Savio, considered like a formal and conceptual basin, which one dialogues with, and whose presuppositions one can expand.
The project is completed by “Gibbosa and Sfuggente”, a couple of spheres that visualize and try to measure the movement of moon around earth; one more time a movement of spheres, a passage from light to shadow, a waving movement without solution and without end.
Close to the two spheres stays an other one, completely transparent, in which sand-glass is drowned, in the centre. The sliding of time becomes an uninterrupted movement, and the space a unit of temporal measure.