Luca Trevisani- The truth is that the truth changes 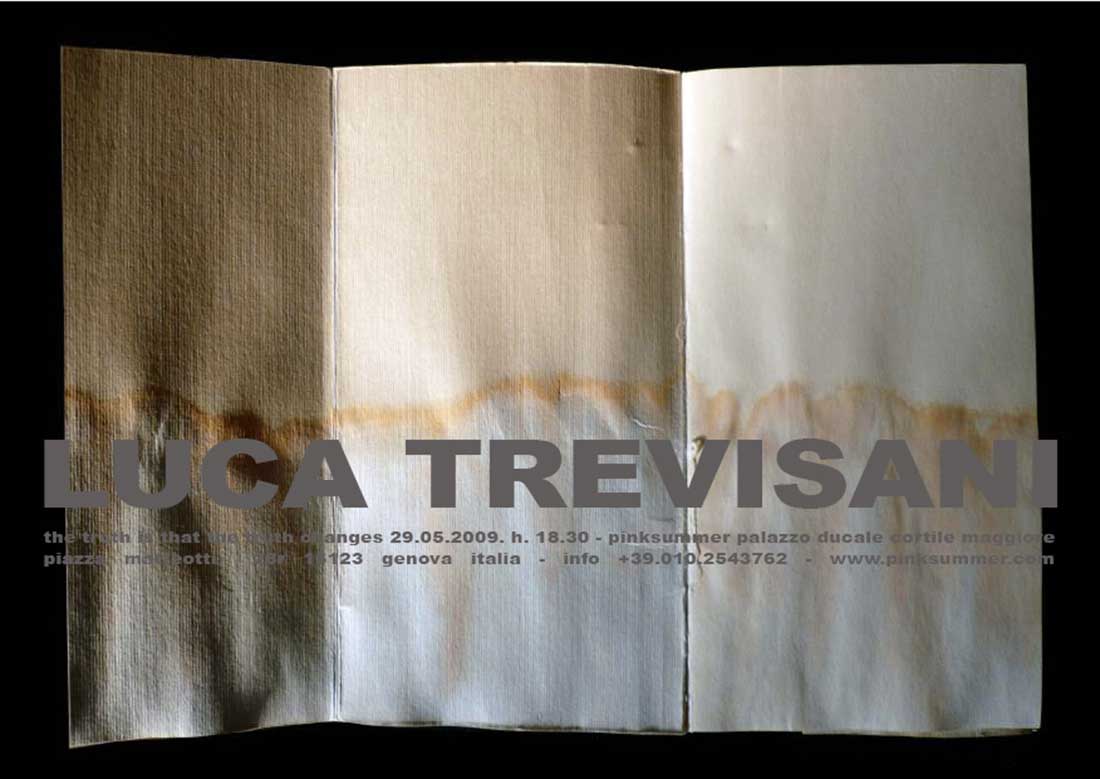 Pinksummer: A long time ago, or at least it seems to us like a long time ago, on the occasion of your first solo exhibition at pinksummer, regarding “Clinamen” – as you called that wonderful video – you made us try dissertating of balance and balances, starting from the logical-rational declination, very aporetic, that Democritus had introduced to justify the associative origin of its atomic world (atomistic?). A concept that, as a matter of fact, leaked from every part, and to pay for this was Lucretius’ sensibility, who, running into a love filter, right while he was weaving the De Rerum Natura, a poetic praise to the cosmology of Democritus, became crazy and killed himself.
Your quite put back partiality led us to Francesco Lo Savio, who never spoke of clinamen, but surely tried to protect himself in a rational declension of life, absolutely ending into committing suicide in a rationalist architectural object by Le Courbusier.
That show was in 2006, really a long time ago, considering the obsolescence of times, and, if you think about it, then it was still possible to talk about that, imitating the baumanian prosopopoeia, a little fashionable, of liquid society, of temporariness in the social relations, of flexibility of the work, because subprimes, even if we could already sense that they were entering our horizon, nobody had ever seen them yet. You, back then, both because of your age and for the time, had more familiarity with slide aesthetics and, if we think about it, you could have taken your skate to slide away at least from these further curiosities of ours; it could have been, but at the end that show had nothing to do with sliding, and so here we are again, after exactly three years.
“Truth is that the truth changes” (“la verità è che la verità cambia”), is the aphorism you chose for your second solo show at pinksummer, not certainly your second solo exhibition at all since your curriculum has meanwhile increased. It’s a title that formulates the latent heraclitism (not even too latent) of your research, and yet what we seem to love more about your work is that it lets foresee the tension towards a last truth, that would escape from the becoming of time and from the relativism of the split and conflictual individuality that, of that time, by necessity, can only distinguish a segment.
The struggle against the lack of balance of things and of human beings that you carry on, tends to dry the endogenous dampness at plurality, but never succeeds. The formal balance you find for approximation, also in those phases we prefer of your work – those implosives, swallowing in an orderly point – is always perfectible, presaging of instability, it does not find the definitive firmness of being, its deep and exclusive common sense.
Sometimes we should believe it is a a priori admission of failure of yours, an useless toil of Sisyphus, or, we could suppose that you believe there can be some place, inside or outside the mind, in which the essences could find an appropriate quietness you long for, hiding behind the formal sobriety that marks you, every frustration. We think that the idea of balance in your path takes on the same connotations of the truth: is it possible that it becomes, for some weird alchemy, an objective synonym inside your discerning?

P: You say that soft wins over rigid, wax over marble, ivy over cement. Maybe you are right, Luca Cerizza, in a text he had written for you, verisimilarly assumes the end of the right angle, because in nature there are no right angles. In Italy, under a political profile, this plasticity of the forms a bit extreme (starting from the subjected one of the “veline”) has been going on for a while, and we don’t like it.
Anyway, about the fact that wax wins over marble we are a bit perplex. Giulio Carlo Argan (a friend of ours who teaches history of art at the University of Genoa told us that “the Argan” as a manual is no longer used because students don’t understand it, if we think that in the ‘70s Argan was elected mayor of Rome) taught that Medardo Rosso and Auguste Rodin were two great sculptors, but at the end was Degas to renovate, you would say redefine, plastic art, perhaps because he, being a painter would use it only as a sort of analysis lab, without emphasis. Rodin and Rosso thought, instead, at the literary dignity of the matter and, if one of them was obsessed by the idea of monument, the other was of the idea of anti-monument.
Wax was useful to Rosso to visualize an inductive method that implicated the opening of a closed form in the space, in the atmosphere, at the same time maintaining the taste for the anecdote integral. We believe, surely by mistake, that for Michelangiolo marble or wax would have been the same, maybe wax would have simplified things considering that it would deduce form inside matter, limiting to exclude the unnecessary. Also when the oppression of matter became grievous, as in the case of the Pietà Rondanini, Michelangiolo managed anyway to render the vector upward orientated perceptible.
Regarding your way to paint with smoke candles, considering the indefiniteness of the canvas, it is easier for us to imagine the wind as a vector rather than as a colour. The vector-wind, an oriented segment (fragment?), could then subsume the colour of your smoke candles and in this sense be reinforced, noticeable, first of all to your conscience, in second place to the other or maybe simultaneously. Doesn’t this mean creating a boundary? The idea of boundary seems to us a constant of your research. Cultivating our garden, taking care of, don’t they mean delimitating, and, by the way, wasn’t Voltaire enlighten?
Doesn’t cultivation mark the shift to a nomadic matriarchal society, linked to flow, to totality, to the patriarchal culture, based on right angles, on dogmas, on the ideal power, that, to be precise, that in recent times, laid down cement over ivy? Didn’t the passage from nature to logos, not certainly from chaos to universe because that came first and doesn’t concern us, teach us that fixing boundaries, properties, is useful to survival?

L.T: I was mentioning Medardo a bit for fun. I feel I am a sculptor, yes, but not in that sense. I’m passionate about the history if ideas more than about the history of sculpture, which I like to raid for my own purposes. For the works that will be on show I have worked with wax and papier-mâché, selecting precarious materials. I like the idea that they get stuck in some shape for some time, and then come back in circle. The wax will melt and the papier-mâché will return to be something else. Maybe. Sooner or later.
I know it well, the wind is a vector, not a colour, of course. What I say, precisely, is that it is interesting to provide a vector with colour. To Exploit it.
Cultivating in the sense of taking care, doesn’t absolutely lead to cement. Let’s not run too much. We must use concepts like instruments, but not manipulate them. All my work is based on giving basic concepts, instruments, levers to move things, but if we banalize them, if we look for an immediate practical application of them, everything flakes. Ideas must be used to think, they must be translated in action, yes, but with calm, they must mature.
It’s about not being afraid of abstractions, even if they apparently might seem senseless, because they are an excellent instrument through which looking at the world.
The only way to understand things is to make a small model that can be hold in hand, to alienate them from the everyday.

P: Is a contemplative gaze a gaze that finds beauty without looking for it?

L. T: From observing the flight of birds, that augural voice, I turn to the most extensive meaning of raising the gaze and the thought towards something, that would rouse astonishment or reverence, to which giving attention with a prolonged and intense act. Staring at, intensely observing. Fixing the thought on divine things, so that it would not care about anything else in the world, and only those to be of consolation and delight.
I would not talk about beauty though. Not at all.
The research for beauty is an old mistake. Beauty cannot be programmed, as it always is the secondary effect of other researches. We must talk with images, not with beautiful images, but with useful images; they should not need words to support them, they must live alone. Words are the genealogy of images and forms, that speak for themselves. Wystan Auden said that the best way to hear Mass is without knowing the language in which it is celebrated.

P: In your notes you spoke about butterfly farms, about greenhouses, a-teleological energies, the organic module by Alvar Aalto, his concept of organic space, about what hiddenly happens on the beach of Skagen. What will you present at pinksummer? How will you articulate your project?

L.T: The show is a symphony, orchestrated with bi and tri-dimensional presences, that will find its climax in a movie, that will be called “Vodorosli”. Frozen seaweeds in Russian are called vodorosli.
I started from a module I have inherited from Alvar Aalto, I have taken the organic thought back home, inside the botanical garden of Genoa, and I treated it like a plant.
Aalto’s belief in an organic space becomes the hint for a mobile, alive formal system, built and animated inside transparent boxes. If I’m interested into giving shape to a system and see how it auto regulates itself, how it finds a balance between its parts, I would do it inside transparent boxes, cultivating it in vitro.
I was interested in seeing where the boundaries and drawings by men impose themselves on nature, and where the laws of nature win. Subjecting pure forms to corruption, to natural dynamism. I have drawn again breakwater, filled the void between the stones of a dry-stone wall, coloured with smoke candles, blocked cotyledons inside wax…
It’s about energies, but energies without qualities. Pure energies. About stages of vagueness, of definition, of realities opened to the flow, to our own determination through change.

Many thanks to the Botanical Garden of the University of Genoa.