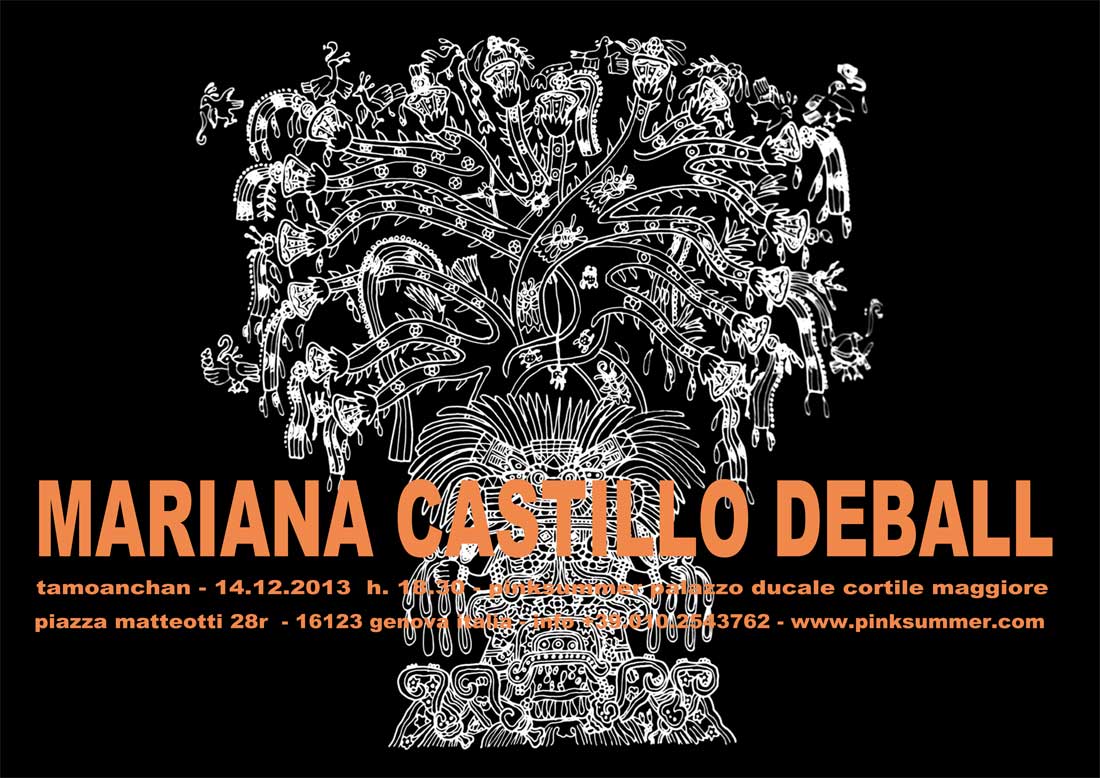 Pinksummer:
Pierre Hadot asserted that it is stupid to judge as if we were the masters of history and cited Augustine, claiming that the one who judges men, he is not just the one who knows them, but also expects that they are something different from what they actually are. Cézanne said that our egoism is mirrored by what we perceive and Bergson elevated the veritas aesthetica to model of philosophy, teaching to perceive beyond the enslavement of the habit, just as Roger Caillois suggested it in his essay Estetique generalisée. Tamoanchan, by re-presenting, or better actualizing, a myth and a symbol, looks like an acknowledgment of belongings, no longer limited to a specific civilization, but universal, as it recognizes nature as first creator.
Tamoanchan is a representation of the cosmological tree, the axis mundi of the Mesoamerican tradition, but also the primary image of the creational phytomorphism common to all religions. The tree that connects the sky to the underground world contains the metaphor of the fall and the nostalgia of the ascent, deeply rooted in the symbolic imagery of the whole humankind. What is your relationship with such archetype of tradition?

Mariana Castillo Deball:
Tamoachan is the great cosmic tree, its roots are deep in the infraworld, and its foliage extends into the sky. The fog covers its base. The flowers crown its branches. The two trunks twisted on each other like a spiral, are the two opposite forces that fight to produce time.
Tamoanchan is one in the centre of the cosmos. It is four as an assembly of poles dividing the Sky from the Infraworld. It is five as a whole.
Tamoanchan is the half of the cosmic tree. Its deep roots conform the world of the death, from where the regeneration force arises. It is also one of the twisted trunks: the cold, dark and humid.
The other half of the tree forms the branches of light and fire where the birds are posed, the souls of the celestial deities. From the foliage spread and slip the flowers of the diverse destinies. This is also the warm trunk.
Tamoanchan, in assembly, is war, sex and time.
The explorations of Pedro Aramillas y José R. Perez in the limits of the old city of Teotihuacan, brought into light a series of murals dated between 550 and 650 ac.
The Tamoanchan/Tlalocan mural is one of the finest examples. On the upper part of the mural, raises, monumental, a tree with a double trunk twisted on itself. It is a tree loaded with different kinds of flowers. Maybe they are drunken flowers. Flowers that disturb and transform human hearts. From the flowers slips the nectar. The branches are covered with insects, spiders and birds. It is with no doubt, The Tree.
An enigmatic figure sits on the foot of the tree. It is anthropomorphic, but its features have originated diverse interpretations. Caso considered that it was Tlaloc the rain god wearing a mask; Kubler spoke about a feminine cult image, not necessary a deity; Miller proposed that the figure is backwards; Sejourné considered that the character combines elements from the fire and rain gods, and Pasztory in the most extensive study until now, said that it is bisexual, that the scene is Tamoachan, that the character is placed on top of a mountain and that the figure contains the rain elements that Sejourné mentioned.
But here is more. The two halves of the tree have opposite elements. On one half there are shells, snails, fish, all water and cold elements. The other half depicts flowers, minerals and warm elements.
Through the cold branches we can see insects ascending, they are butterflies flying to the top. On the warm branches there are spiders weaving their net, and one of them is obviously descending hanging from a thread to the centre of the image. The spider descends; but it counts not just because it is going down. Pasztory gives us another intelligent association: the spider is related to dust and drought. The forces that ascend and descend in the tree are related to the agricultural cycle.
Again we find in this image, both in the character and in the tree, the fight of opposite forces.
The mural of Tamoanchan is still in location nowadays in Tepantitla, as an archaeological site open to visitors. Some parts of the mural are damaged, so the image is not completely visible, but there have been several reconstructions in other locations and documents. For pinksummer. the floor of the exhibition space shows the reconstructed image, which doesn’t exist as a whole, and on the walls, we present a series of paper works printed directly from the floor, depicting the areas that are still visible at the original site.

P:
Mexico City rose up on the ashes of Tenochtitlan, the ancient capital of Nahuatl or Aztec empire, in fact the term Aztec is a much later term, coined from the geographer Alexander von Humboldt, in order to distinguish pre-Columbian population from modern Mexicans.
They say that Tenochtitlan was founded on an island in the middle of Texcoco Lake and that was considered a sacred city such as Jerusalem.
We think at Distanza and Menzogna in which your hand casted in porcelain acts as a doorknocker on a mirror, alluding to the gestural impossibility to knock on History, informed by the mirror that can only reflect the present or get broken. Is the map of Tenochtitlan, handed on by Cortés and presented again for the exhibition in Berlin, a secular repercussion of Tamoanchan, the place where pictographic mythopoiesis locates the beginning of time cycle?

M. C .D.:
On a previous work exhibited at the Hamburger Bahnhof in Berlin this year, I did the first wooden floor piece based on what is known as the Nürnberg Tenochtitlan map.
In 1521, a letter and two maps arrived in Spain for the Spanish king. This was the second of three letters, which the conquistador Hernán Cortés had sent, describing the Aztec capital Tenochtitlan, which he and his crew had discovered and were close to conquering. The main map was a detailed illustration of this city, and the other map was a sketch of the nearby Mexican gulf coast. The main map seems to reflect the conquistador’s characterization of Tenochtitlan as an enchanted metropolis, a jewel rising up from the centre of an azure lake – an ordered, wealthy civilization, but also a misled society centred upon heathen ritual sacrifice instead of enlightened Christianity.
This depiction of Tenochtitlan served to justify the expensive Spanish colonial efforts not only to King Charles V; the 1524 publication of the map and Latin-translated letter in Nuremburg also sparked the imaginations and support of a large European audience. This map was the first and most widespread image which Europeans had of Tenochtitlan and remains one of the few maps we have of the pre-colonial Aztec empire.
Some archaeologists now believe that this map was the result of many copies on the way from Mexico through Spain to Nuremberg, and they also believe that the original map was drawn by an indigenous artist, after all. The portrayal of rows of houses and the island capital in the center of a circular lake is not only to be found in the European mapping tradition, but also in the Aztec one. The map also shows details that were not mentioned in Cortés letters and which draw Aztec historical and religious references which were not understood by Europeans during that time.

P:
You have always had a curious relationship, tainted with the ironic twist of the paradox, with the episteme and the rigorous dogma that tends to qualify the judgment and to confirm its validity through the method. Now you take us into the luxurious and mythopoeic topography of Tamoanchan by showing us the cosmetic ordering potential of the sacred, opposed by nature to the chaos and the circumstances of becoming. Here the opaque machinery of linear progression is replaced by the spinning dynamic of the cycle. In the cosmogony of Tamoanchan, the art of the divination appears nearly possible, as if the outburst of nature and its forms was permeated by intelligibility, like if the absurd could had a law. The Florentine code conserved at Laurentian library recalls the symbolic etimology of Tamoanchan and the meaning “to get home”. Is it inappropriate to understand this attitude of getting home as a scatological perspective immanent in Mother Nature? What is your relationship with the sacred and the magical?

M. C .D.:
Tamoanchan is the axis of the cosmos and the assembly of cosmic trees. It is where the sin happened. The gods put together opposite substances, originated sex, and with it the creation of another space, other beings, another time: the human time. By their sinful action, the gods where punished: exiled into the world of the death and to the surface of the earth. The gods started a new way of existence: transformed, originated the beings of this world; but they were already infected with death, a consequence of sex. Their existence would be limited in time, limited in space, limited in their perceptions. They would have in exchange the possibility to reproduce themselves.

P:
All your work is traversed by the need to actualize the abstraction, to give a physical presence to the thought. Your work refers to the concept of translation, which involves the idea of passing, leading beyond and implies the idea of the route, of travelling. When you embark on a journey, we leave something behind and find something new, something else. Translate, in its original meaning of taking beyond, also refers to the verb betray even understood as to deliver, to transmit. Why did you give us these transmitted/betrayed maps to walk on?

M. C .D.:
Sometimes I use the term ‘possession’, referring to the way I deal with appropriation, embedding myself into diverse working methods and trying to follow them. Sometimes it can be a formal experiment, like when I try to replicate the Scagliola technique. Sometimes it’s a more intellectual or narrative approach, where I try to catch a certain way of describing things, or the way they study them or look at them. I try to catch the different points of view and the different ways of relating to the world. This always starts with a very specific question, in the case of the exhibition at pinksummer, it’s a question about how an object survives beyond itself; it’s not just the thing in itself, but it’s also the ghosts and the replicas that this object creates. So then I concentrate on this question and I see how different people have approached this object from their different points of view. Maybe it’s an exercise in concentration. I think it’s also about retrieving myself from what I think is right, or real, or correct. I adopt the position of the object and follow its path.
This question makes me think again about the historian Carlo Ginzburg. One of his working methods is called estrangement – he uses estrangement as a tool. He tries to retrieve himself, to imagine he’s a horse or a rabbit, in order to understand something more clearly. If I think about that in relation to my approach to Mexico it could also apply, because when you’re dealing with your own cultural identity you can be tagged so easily; you could say ‘I’m a Mexican woman artist’, or ‘I’m a Mexican woman artist who doesn’t live in Mexico but is making work about Mexico’. There are so many things that I could be trapped by, so I always try to be careful to escape from these preconceptions. The cultural identity of Mexico is so strong and has so many layers, so I think that I’m like a chess player: I’m always trying to change my position.