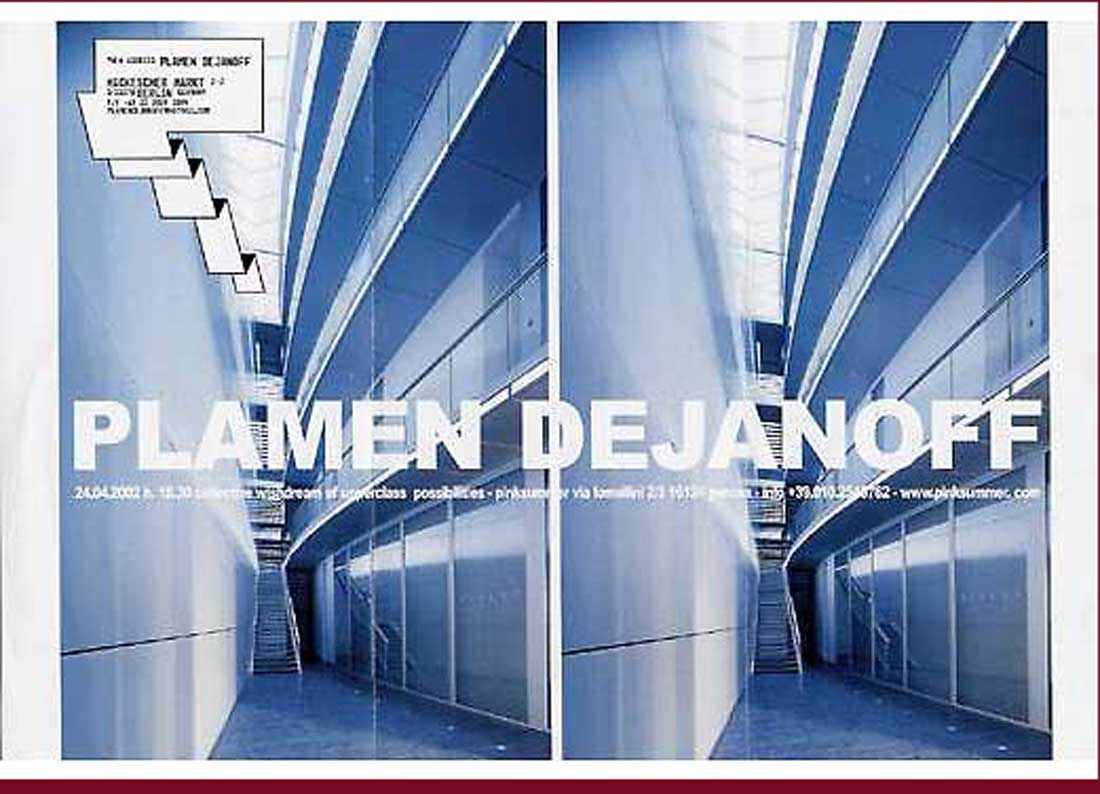 Plamen Dejanov work develops the relationship between culture and economy: the artist uses the typical dynamics of corporations following the process from production to consumption focusing on communication (branding) and realizing an osmosis between art and life.
The artist presents ‘Collective Wishdream of Upperclass Possibilities’ a project based on the change of home in a existential way as change of identity, in a new lifestyle. If in the period of industrial production the objects were an extension of being, in the time of hypercapitalism, based on advertising and branding, the products make the being (emblematic in this sens the ad of the new motorola microscope).
On this project Nicolas Bourriaud says: “Dejanoff makes, in this case, an art of replacement”. The artist, after the split with Swetlana Heger (with who has worked from 1995 to 2000) chose to move from Wien to Berlin, in Mitte, to a building designed by the young couple of architects Ernst&Gruntuch, finished in 2001. The high-tech style building is the home of corporations such as Adidas, Sisley, Benetton. Viva, Wir design; only three apartments are private lofts – one is the artist’s. The Hackesher Markt 2 building is included in several guides of Berlin as one of the most interesting pieces of architecture in Berlin. Dejanoff then contacted M/M, the French duo of designers, asking them to invent a logo for his new card and some luxurious announcements including exterior and interior views of the building and the logo with the address.
This project on the address changing and the change of name, from Dejanov to Dejanoff (suggested by Wir design, a firm which creates and takes care of the look of pop stars) transforms the existential experience into a kind of joint venture, common in the real economy. In Italy, the new productive cycle of Dejanoff comes to real life through the Flash Art cover, issue April- May 2002.
This cover features one of the luxurious announcements as advertisement. Inside the magazine some other announcements are published with the text ‘The artist as a limited company’ by Nicolas Bourriaud, co-director of Palais de Tokyo. Collective Wishdream of Upperclass Possibilities is a project shown in different venues: currently one sculpture of the logo is at the Kunsthalle in Hamburg in Art&Economy exhibition.
At pinksummer Dejanoff will exhibit an installation of a stack of Flash Art magazines, issue 233 and a series of ‘fetishes’ made of artificial crystal.
Recently the Belvedere Museum in Wien cancelled the solo show of Plamen Dejanoff scheduled for the 26th of april; it seems that they though the project too ‘realist’ to be art. We are consoled by the thought that the church of Santa Maria della Scala refused the Morte della Madonna by Caravaggio because it featured the Virgin in too ordinary a fashion.
The conformism of Dejanoff to the contemporary economical-social dynamics is without no doubt irritating; he does not go far from reality in representation, but baths into it and lives it. Showing us the segments of sponsorised life Dejanov\ff leads us to reflect on the progressive subordination of culture to economy (as shown the obvious decadence of the TV programs due to the logic of ‘audience). The real conformist in art it the one that wants to’épater les bourgeois’ with a recognized critic (because ideal and lubricant) to eventually obtain their favors.