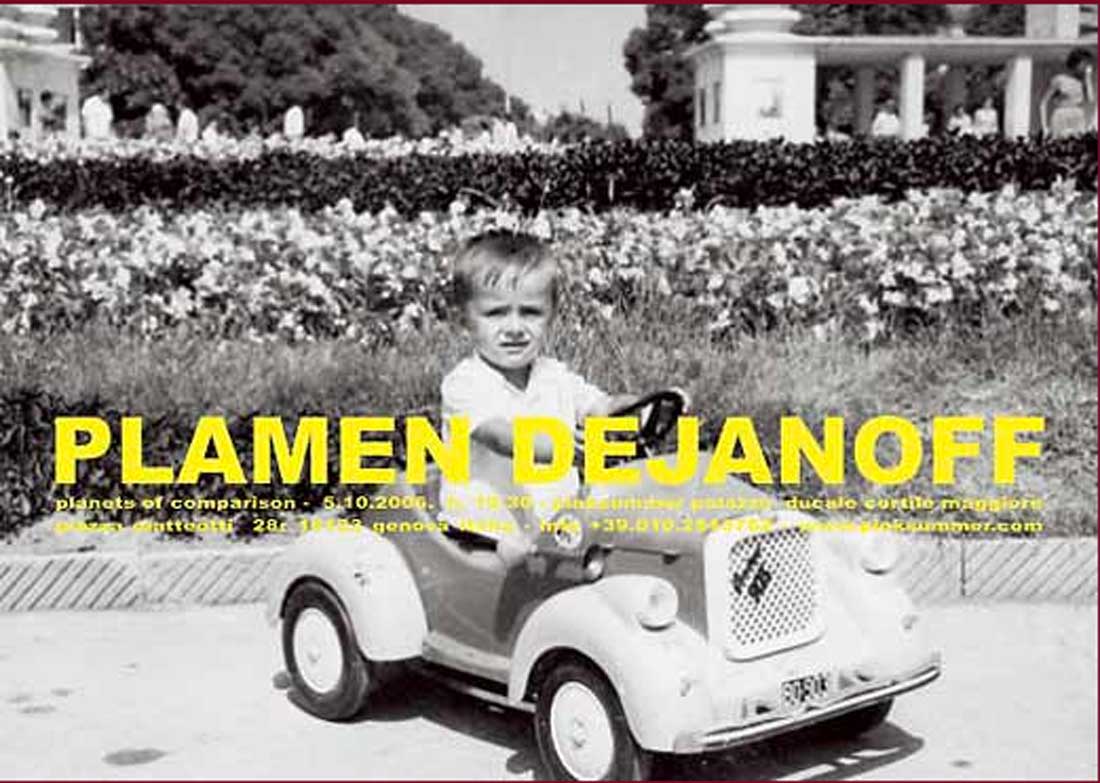 About the work of Plamen Dejanoff, regarding the focalization on the economic dynamics that structure individual and collective lives of societies, we could say, at first glance, what Baudrillard wrote on the Americans, i.e. that it has no sense of simulation, but it is the perfect configuration, but it does not possess the language, being itself the model.
A feature that, formally reinforced by the maniacal aestheticism of his works and with titles such as “Collective Wishdream of Upperclass Possibilities”, makes him appearing like an “impostor” or “swindler” (as Nicolas Bourriaud defines him in the essay Post-Production) rousing, among bith curators and collectors, a curious form of Manichaeism that brings about a “for” or an “against” Dejanoff, sometimes becoming a real annoyance at his way of being.
We said “at first glance” because Dejanoff was born in Sofia and western capitalism, or better western hyper-capitalism (the artist studied in Japan) is a culture that does not belong to him, but for this very reason he could appropriate those mechanisms, which he reproduces with such paradoxical and exasperated radicalism, apparently a-critical, so to emphasize by excess the germs of egotism and decadence. Moreover he introduces, in a non-jolly way, the economic dynamics in the taboo enclosure of creativity, which many love to believe free, even if it has been always playing with the current members of the establishment, the only ones who can actually pay more than simple attention.
It was with the solo show at pinksummer in 2002 that Dejanoff began his career of solo artist; at that time he was practicing a sort of strategic re-formatting of identity in respect of what Bauman would define as “quality” of programmed obsolescence. In that case, the production of the exhibition was a contribution to the communication campaign launched by the artist in order to re-emerge regenerate and pure, as from a baptismal fountain. He asked us to buy the cover of Flash Art Italia.
“Planets of Comparison” is not only the title of the solo show at pinksummer, but an whole cycle of work started by Dejanoff with the large solo exhibition at Mumok, Vienna, last spring. In this show there will be no luxurious ready-mades placed on translucent platforms, but sculptures whose “pop” formalistic inclination is not contradicted by the attention for materials: wood, marble, ceramic e with a special care for the production of objects whose substance is no longer only conceptual: we are out of the post-production aesthetics.
We always considered Plamen Dejanoff as a social artist, in true meaning of the word, and his works as a sort of thermometer of the times. This new cycle of works seems to show nostalgia for an economy at odds with the creed of wild privatisations, of zero-weight companies, of capitals fluxes, of capital for capital. The one, to take an Italian example, that transformed Olivetti in a financial box for Telecom, and eventually having it disappear forever from the Company Register. Nostalgia for an economy able to produce profits and jobs.
“Planets of Comparison” seems to tell us about our world, made by exploiters and exploited, producers and consumers, originals and copies, but over all planets of comparison . . . the demiurgic myth of manufacturing industry, on which Dejanoff’s signature elegantly lays as a factory label (but not empty as a logo).
We tell also about a project by Dejanoff that does not exist yet, but that we hope to realize within the end of the show, titled “The Higher Powers Command”, alluding to a work by Sigmar Polke dating 1969; Polke’s work, a raw canvas that presents only the top right corner painted in black, makes game of the creed of the artist’s divine inspiration.
The performance “The Higher Powers Command” by Dejanoff is a work in progress in different locations whose shooting will be a movie. The first performance took place in the Kiel Kunsthalle in Germany and, after seeing the premises of pinksummer, just in the beautiful court of Palazzo Ducale, the artist asked to organize a second performance in Genoa.
The performance entails the artist’s black Porsche Cayenne, new at zero km, a dj set, two Porsche mechanics in their Porsche uniforms, a series of Porsche components indicated by the artist, a display of the same.
On the music soundtrack, during two hours of performance the mechanics will change the new component of the new car with different new components following the instructions of the artist, who in his turn follows “The Higher Power Command” the divine demon of the art, of whom the artist wants to be only the voice.