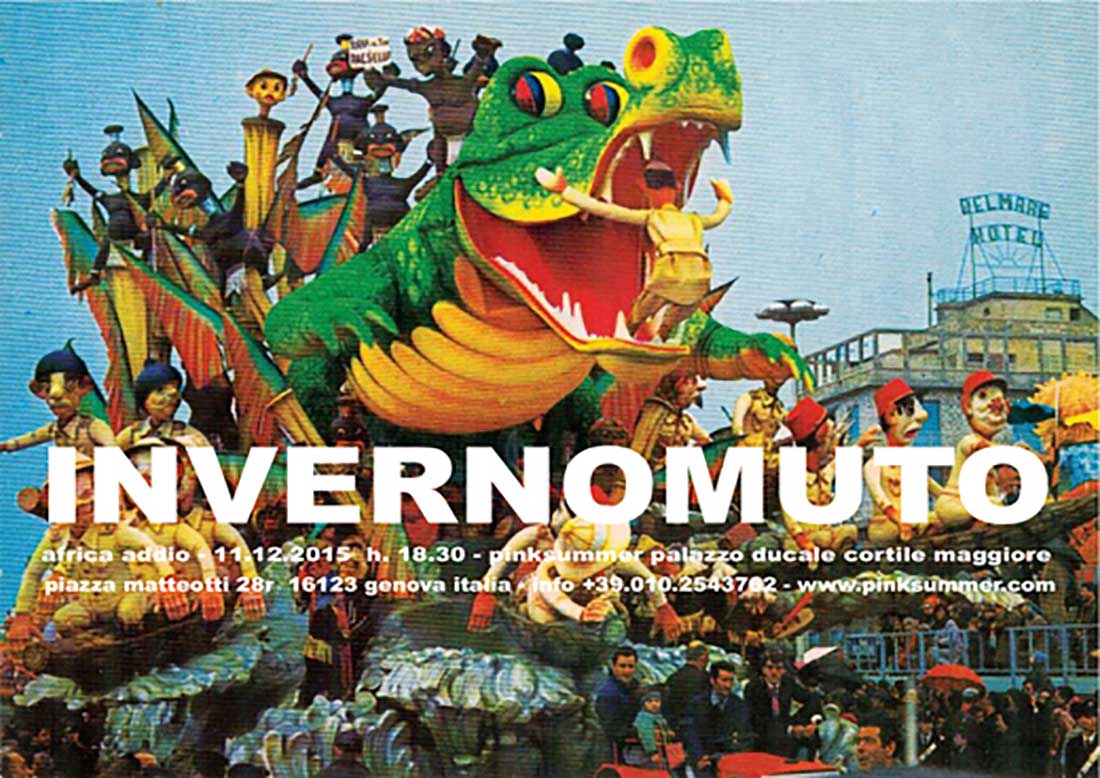 Pinnksummer: Who the hell are Dracula Lewis and Palm Wine and what do they have to do with Simone Bertuzzi and Simone Trabucchi and most of all with Invernomuto? Are they “alias” which use is limited to some specific roles? We are interested in clarifying the role of Dracula Lewis and Palm Wine regarding Invernomuto: visual art collecting practice is mistrustful in front of multiple authors creativity and its products, let alone when some alias with comics-like names jump out of a collective, which name recalls an entity from a novel that became the Cyberpunk “manifesto”, with its intolerance pushed to the limits, typical of any artificial intelligence, beginning from any poor soulless golem.

Invernomuto: Invernomuto has always moved on the edge of disciplines: visual arts, experimental cinema and music. Collecting practice is mistrustful, true, but it is also true that this is an Italian problem. Invernomuto aims to create a landscape of objects, sounds and environments; there, on the line of the horizon, it places research elements, works, that part and might be apt to be channeled in the market. That is a natural process, for us, but it is nothing new if one observes other Italian situations.
Palm Wine and Dracula Lewis (respectively SB and ST) are parallel projects sounding some musical worlds, independent but analogous in respect of the Invernomuto art research. As a matter of fact, it may be funny to know that until a couple of years ago they did not even appear in our bio. Kim Nguyen, director of Artspeak in Vancouver, where we had a solo show in the beginning of 2015, for the first time included PW and DL in the bottom part of a short bio attached to the press release; and she did it spontaneously.
Also, we often forget what is the effective purpose of a moniker (or alias), no matter if the one of a collective or of an individual. Its effect is hiding the ego in favor of a wider, different vision, often moving along a line tangential to the real, but that just within the real finds its effectiveness. A moniker is not an avatar, a moniker can leave a sign and open wide thousands of meaningful doors pertaining to codified worlds or going through a codifying phase, but, unlike the avatar, it lives in reality. Therefore a collective name is first of all an evocation, the creation of worlds that for us are not distinguished from here.
Alias, or moniker, derive of course from the subcultural heritage in which we have grown up. We became allergic to the words inverno' (winter) andmuto’ (dumb), for some reasons, many times we have thought at shaking them off. But, after all, why?

P: The fake, around which your poetics is formed, it is a condition intrinsic to landscape, meant as a synonym of the ancient physis, or is it an element whose introduction is necessary in order to elude, as if it was some sort of clothing, the substantially inhuman and dangerous quality of the truth? Maybe it was Nietzsche who asserted that one must stop bravely at the surface, “to Mount Olympus of appearance” and to enjoy its forms, the sounds, the words…. Is fake the aesthetic assumption of nature or a peculiar way to bring History up-to-date, by entering a fictional gate, like one can do in a live action role-playing game?

I: “It has never been so real!” So declaimed a banner of Seconda Foundazione, an Italian LARP group that we have involved in our project Village Oblivia in 2009. The idea of gate, magic circle, a `within’ more real than reality obsesses us since a long time.
It is a matter of surfaces: the attractive softness of camping pad foam, a foam used for the weapons of live action role players, or the one of Morositas licorice. We use materials (or non-materials such as the green slimer) as indications of an imaginary and an historical moment. And among the materials we include also the impasto of video and sound, mold in a different way according to the kind of story we mean to tell.
The fake is the moment of collapse in between the find and its updated imaginative translation. It is undoubtedly a way of looking at history, that is nothing but sedimented layers of narrations. When objects succeed in smashing these levels, for sure they stimulate our curiosity.

P: Is defining yourselves layout designer a little like calling you post-modern and supporters of the “weak thought” that moves from the proclamation of the death of God, or do you simply believe that since ever the human invention, any kind of invention, cannot help starting from a layouting action, as if, when inventing an animal that does not exist, such as the centaur, one should start always from two existing beings, like the horse and the man, and put them together through an action that you can just call layouting?

IM: Layouting can be an alchemical action, same as mixing or juxtaposing. Not necessarely when mixing two sources you will obtain the sum of the two, on the contrary, most of the times new unpredictable forms are created. Layouting is definitely a creative act, if the attitude of the layout designer is synchretic and experimental. Layouting is for us one of the best ways to generate worlds; or to spontaneously lose control within already existing worlds.

P: And how to approach language and correspondence with the real, by considering that, on the hills between Parma and Piacenza, the word negus, originary referred to the king Halie Selassié I, eventually turned into a synonymous of layabout and slacker, while elsewhere, among Rastafarian people of Jamaica and of the world, the same king Haile Selassié, is negus neghesi, the king of the kings, the ras tafari, the noble Ethiop, the chosen by God, the light of the world, the Messiah, so that Bob Marley reacting to the impossibility of his death composed “Jah Live”. We consider the fact that Saddam Hussein too and Mu’ Ammar Gheddafi, even though their stories are laic and more secular than the one of Halie Selassié I and apparently nor Salomon King, nor queen of Saba or any Islamic equivalent of same bloodline are among their ancestors, however in some remote and faraway place, among their people for example, they could not have been the scoundrel, they have made us to believe they were. On the other hand, by rummaging inside fascist propaganda, looking at your work “Topolino in Abyssinia”, presented at Triennale in the exhibition “Anabasis Articulata” curated by Paola Nicolin, we discovered that the tender and democratic Mickey Mouse, at the time of fascism was a really bastard camicia nera armed to the teeth, with asphyxiating gas in his canteen too, eager of killing for his homeland and family.

I: Negus is pivoting on the figure of the last Emperor of Ethiopia. Without him the architecture of the project would collapse. There is the carnivalesque Negus, enemy of the fascism, set afire in the square of Vernasca; there is the King of the Kings, monarch of Ethiopia, crowned in 1930 with a monument formed by a three-pointed star (Mercedes Benz logo); there is the Black Messiah, the second incarnation of Jesus, according to Rastafarian believers; there is an icon, free traveling and spreading around through cover slips, video clips, cigars, stamps and rasta iconography in general; and finally there is Lee “Scratch” Perry, the demiurge inventor dub music, who has a very personal and syncrethic version Ras Tafari, the one who maybe represents a possible robotic reincarnation of Selassie – and who, in Negus, purifies the square of Vernasca, with an odd ritual of ice and fire.
We are interested in showing the unusual and contradictory sides of a known symbol or history. Or, on the contrary, to contradict the stereotypes by using hidden iconographies: in “RAS” that we present at pinksummer for the first time, an element of popular construction industry from the years of Italian economic boom (technically a roof tile) becomes some sort of Egyptian funeral mask; the work is a copy of the original roof tile, made from resin, coated with licorice and old heap.

I: History is rich of inventions. Mussolini’s Africa used to look like idyllic and pure to Italy; with a few connections with the truth of battlefields; it was an authentic invention, aiming to satisfy some specific palates, alas the most discerning palates, sometimes. The point is that there are some unsolved questions, that still have consequences nowadays. That is what we run after in the movie Malù – The Stereotype of Black Venus in Italy, concerning the representation of the black feminine body in Italy.
There is a Italian naturalized Sirian author we love very much, whose work we borrowed for the exhibition Anabasis Articulata (Triennale of Milan, 2014, curated by Paola Nicolin): Alessandro Spina. Spina wrote a few novels and short stories, all set in Italian colonies of Libya and full of almost theatrical elements, that well depict an idea of imaginary alterity.
We love minor stories. We like to use them, to rehash and to set them in a new context without any nostalgia. We speak live and we use materials from the past, the present and the future. Negus is a centrifuge of places, cults (archaic, but most of all untouched) and biographies, in this sense Perry is a good amulet. And he is very entertaining.

P: Please, tell us about your first solo show at pinksummer “Africa Addio”, about the image you have chosen for the invitation card. What are you going to present?

I: We are going to present a peculiar and very personal mythology of emperors and kings.
The scene is occupied by a huge inflatable gorilla (Super Ape) that inflates and deflates cyclically; Lee “Scratch” Perry in 1975 recorded “Super Ape”, considered one of the first – if not the first – dub album in history. This year is its twentieth anniversary and, to celebrate its issue, Perry has just ended a tour in the United States. The big ape on display has been on all the stages of the tour and was produced through a crowd-funding campaign to which we contributed substantially; now we are the owners of the ape; and it will travel with us.
Importé d’Italie instead is composed by a series of four silk screened iridescent fabric banners. The illustrations and the decorative elements derive from a collection of Sicilian orange wrapping papers; each of them represents a black face, a Moor King and features the French writing “Importé d’Italie”. The original wrapping papers are visible in the collage of the series “King Moro”, where we applied to every face a crown made from golden leaf – and in “Mooretto”, a mobile wooden module with a LED scrolling sign, which texture (the classic red bricks wall) is drawn from the backdrop pictured on the same wrapping papers.
Africa Addio – that gives the title to the exhibition – is a print on fabric featuring an end-of-Sixties postcard showing a float of Viareggio Carnival, the same one used for the invitation. The title it of the float is, curiously, the same one of a movie directed in 1966 by Gualtiero Jacopetti and Franco Prosperi, a classic of Mondo movies. The float is very complicated, rich of details, among which stands out a board with the writing “go back to your village”. The flag is made with a tricolor ribbon.
Bones, Atlanta is a portrait of the last King of this exhibition dynasty. Bones is a dancer that we met in the airport of Atlanta, where he works, during some hour of stopover. We asked him to improvise in front of the camera during a pause.