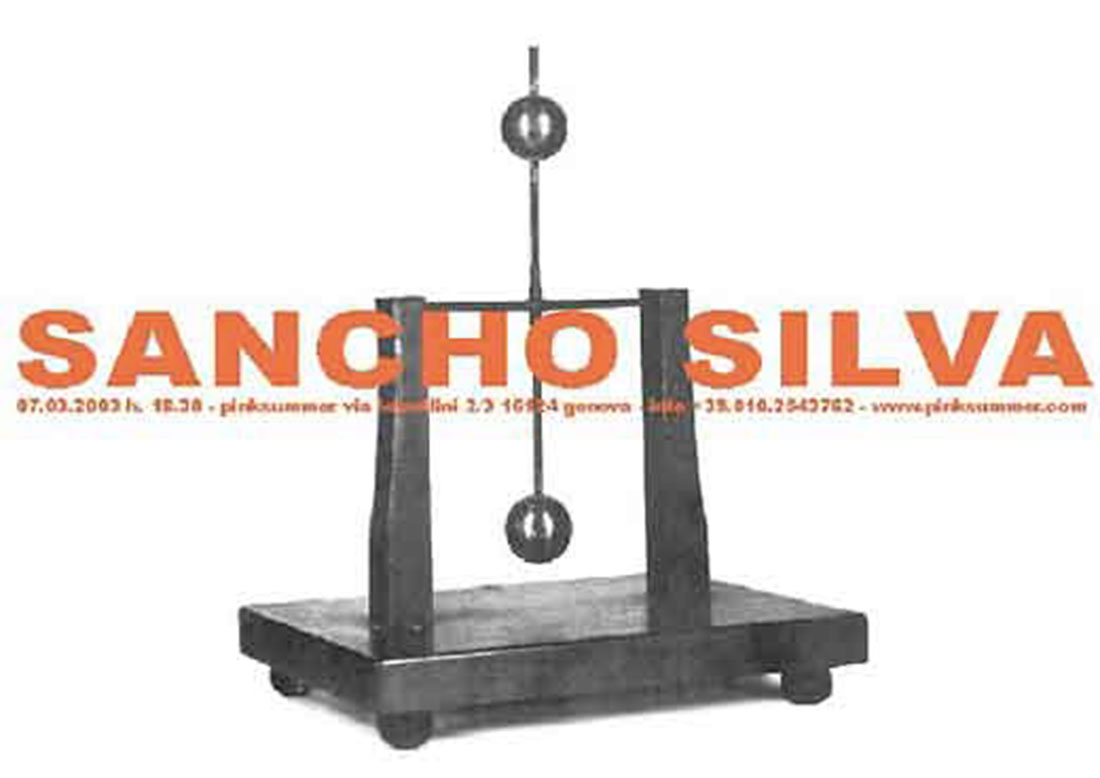 Pinksummer: “You wrote that the central concept of your work is the space one. The idea of space is not univocal but takes different shapes and meanings in the different fields: from mathematics to philosophy, from economic sciences to those social as urban design conceive the space in their own way, apparently autonomous. You said that discover the connection established by the history, by the time between the different concepts of spaces is an endless work but definitely significant. Is this what you pursue with your work?”

Sancho Silva: “Not exactly. I don’t think my work develops according to a precisely determined philosophical project. It is not guided by strict methodological principles. I think it operates according to its own logic and, conceptually speaking, its movements are quite unpredictable. What happens is that once I look back at my works I try to articulate them according to a conceptual scheme.
Slowly this conceptual scheme gains its own momentum and begins to take a specific direction that is not necessarily parallel to that of the works. What this means is that there is always a tension between the works and the conceptual scheme that envelops them. Surely the conceptual scheme will punctually influence the trajectory of the works, but it does not guide it.
That being said I can say that I have a big interest in the history of space, how its furthermost limits and its overall shape have changed, how it has been treated philosophically and scientifically, how it has been articulated, categorized, constructed and represented across history. I think this will help us understand what is space today and to what extent it acts and forms the world.”

P: In the topography you individualize another concept of space that connects the mind space to the political space. Your analytical constructions start from the mapping of the space that includes them and re-configuration it trying to create obliged perceptive ways. How do you start from specific space? On witch bases do you define your trajectories?

S.S: On my first contact with a specific space I try to grasp the forces that are operating in it (be them sensorial, ergonomic, social, symbolic, etc.). I believe that every space is constituted by a multitude of such forces constantly and dynamically interacting.
On some of my works I may try to act upon the hierarchical organization of these forces. I may, for example, transpose to the tactile realm a force that usually manifests itself in a non-tactile dimension. I may also try to redirect or contain a specific force substantially altering the overall equilibrium of the system. I guess the trajectories you are talking about can be understood in these terms.
They result from an emphasis on a specific force (e.g. a visual axis, an ergonomic trajectory, an implicit social barrier) that is given a tactile form. Often the result is that the translated (or “tactilized”) force ends up interfering with other forces and some type of spatial ambiguity is created.

P: For the pinksummer invitation you choose the image of a pendulum, the image of time, dynamism, fluently of the physical world. Somewhere we read that while a tick can only wait for the butyric acid and so don’t pass through the organic present, we, human beings, can wait for Godot. Through our imaginary constructions our horizons of time become unlimited. The concept of limit brings us back to space. Space and time coincide in your work?

S.S: During the last few years I’ve thought about my work mainly in terms of space. Only recently, with a project I did in Oporto, did time come into the picture. I’ve said before that every particular space results from the interaction of a multitude of forces.
I believe the same is true of time. I doubt, however, I will ever deal purely with time in my work. Maybe music is the only way to do that. What interests me in time is its relationship to space: how can it (or one of its components) affect space, how can it be treated in spatial terms, how can a particular spatial organization define and articulate a particular time.

P: In some ways your work refers to the analytic cubism of Picasso and Braque. In Overviewer, project presented in 2001 at the Serralves Museum in Porto, the viewer could watch through a periscope behind the wall that block the view of who can watch trough the window of the museum. This kind of pass through the physic perception with a periscope refer to the knowledge and again to the time, time of memory through that we can know even when we cannot see?

S.S: In Overviewer I attached a periscope to the right half of a window that would otherwise look directly onto a wall. The left side of the window was left uncovered. When looking through the window you could see the wall on the left and, on the right, a tunnel that appeared to go through the wall and reveal its other side.
The result was, on the one hand, an alteration of the topological structure of visual space: two places that were previously visually disjointed were now visually connected. On the other hand, and because of this topological shift, the visual components of the space were themselves severed from the architectural and ergonomic ones. Maybe there is a parallel with analytic cubism, but on my work the spatial components are not separated in time. They are inherently separate.

P: Bachelard said that outside and inside are a lacerate dialectic and the geometry of this dialectic digress in the field of metaphors that make the thought spatial; the cleanness of yes or not, to be and not to be, inclusiveness and exclusion… We are thinking at Gazebo, the minimalist construction that you presented at Manifesta 4, or at Overview in Serralves or at Shorcut recently realized ad De Appel. Why the inside and the close door of your works are similar to the outside and open air or the opposite?

S.S: Inside and outside are relative to the particular spatial component we are considering. The visual outside is not the auditory outside, the architectural outside is not the social outside. What happens is that once you map one realm onto another other, the outside of one realm may not coincide with the outside of the other so that you end up with some type of spatial ambiguity. In extreme cases you may even completely undermine this duality.

P: You said that through the decoding of a specific space we can discover the organization of societies their practices and their beliefs. It is the human being the central concept of your poetic of the space?

S.S: No. I think the central concept of my work is that of space. As with time, I’m interested in the human being only to the extent that it relates to space. How can it become one force in the formation of space and, on the other hand, how can it be seen as itself a product of space.

P: You have a degree in mathematics and philosophy why did you choose to operate in the visual art field?

S.S: I give a lot of value to imagination.

P: A dealer worry, this in pinksummer is your first show in a private gallery, your work as the idea of space exclude the objectification and start always from a pre existent architecture. How do you are in front of the modalities of collection?

S.S: I haven’t thought a lot about that. I think collections always find ways to keep collecting. I keep plans, drawings and models of everything I do. If there is nothing left of the actual works, I guess you can still look at these and imagine.

P: What will you be presenting at pinksummer?