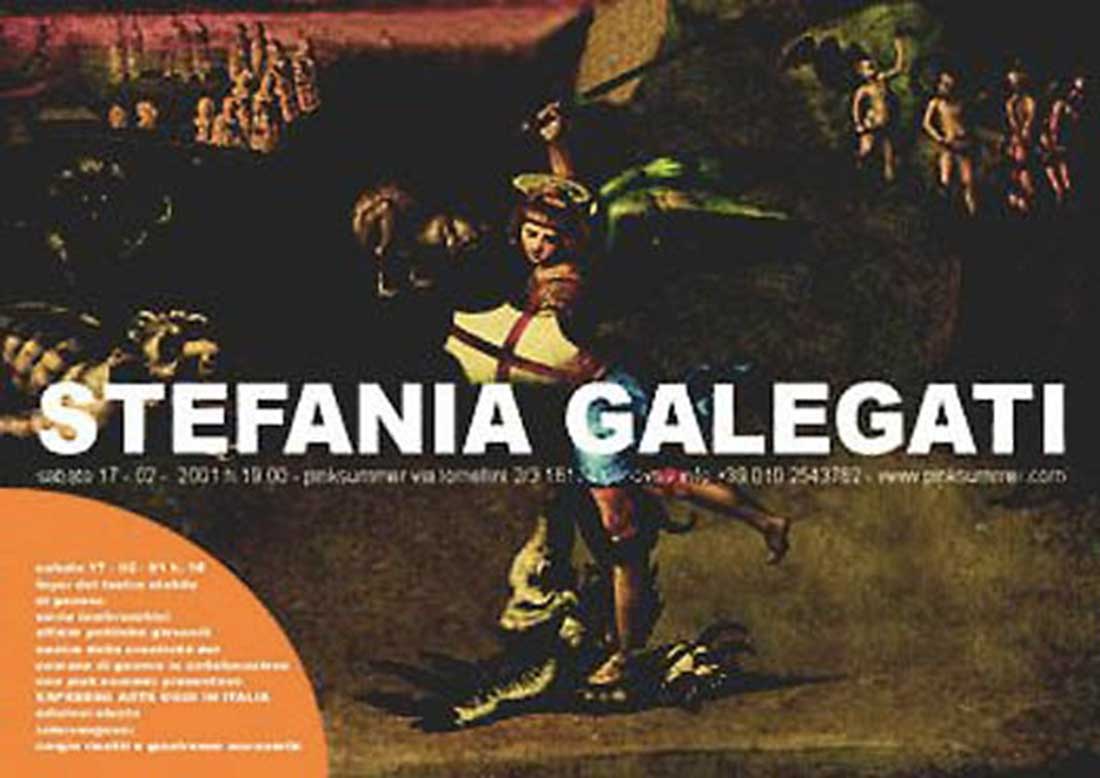 Pinksummer: Your work seems to come from the need for creating an illusive world; is it an antidote to reality even if you start from it?

Stefania Galegati: The difference is simply in terms of logic. For example, people still say that “sun rises”… Perhaps my work is an antidote to habit. Believing in a story implies an act of faith. Even if you know that a story is fake, you trust in it.

Pinksummer: In this sense is photography useful to make lie truth?

S.G: It was like that until photomontage became so perfect that you are in doubt about the reality of images. Anyway, everybody believed in the man on moon: actually the moon landing showed by the movie Capricorn One was built in studio, but nobody doubts of NASA. The great public isn’t still shrewd: the face of Berlusconi (on the advertisement billboards for government election) is a mask done using Photoshop, but nobody cares that he is fake. It is more important that he looks always young and smiling. As the aesthetic of totalitarian regimes taught, it is easier to trust an image than to abstract the truth from the matter of facts. Christ is white because the occidental church wanted such iconography, that actually can’t be true.

P: At Pinksummer you show a painting project. What does the painting represents for you?

P: Describe the project that you realized for Pinksummer.

S.G: The project consists in the first three works of a series. They are oil on canvas paintings that render ghosts apparition stories. I sought to collect reports by people who believes to the reality of their experiences. Painting was the cheaper way to attempt a kind of scientific representation of mysterious phenomena. Ghosts stories scare, even if nobody believes in them. I’m interested in psychological mechanisms that works when it’s necessary to confide in a story. It doesn’t matter if they are real or fictional phenomena: I like the way they are on that borderline. I’ve found many stories of light apparitions, that science calls globular thunderbolts, but none knows yet how they happen.

P: Did you visit some places where it seems that apparitions happened; do ghosts exist?

S.G: Mr. Fusoni saw two hooded monks close to the Montebenedetto Certosa, in Susa valley. The Certosa is desert from the beginning of the century because of a flood. Close to a chapel, inside the ruins of count Verde castle near to Condove, a priest appeared many times: he celebrated Mass and went out as he was sliding through a walled door. Some persons assure to have seen a blue dressed figure who showed herself from the highest window of Catajo castle, close to Padova: they think that she would be Lucrezia Dondi dell’Orologio, killed in her bedroom in 1654 by her scorned lover.

P: The other project?

S.G: Also the second project tells about a meeting. It is a video that shows a man walking in the country who meets an invisible object. You can guess its form by the man’s movements. Man looks rough, he has hard features, just like popular beliefs and proverbs suggest. The object is essential and strongly present. The situation is a little bit embarrassing, like meeting an unknown person in the doctor’s waiting room. The possible drama against madness of situation allows a tragicomic indecision.

P: At the exhibition “Migrazioni” in the Centro per le Arti contemporanee of Rome you showed a little terracotta samurai holding some potassium 40, a radiant substance, inside its bosom. The geiger meter and the guardians around the glass show case contributed to make the situation threatening, even if controlled. Why do you poke the public with worrying subject?

S.G: I’m not attracted by dangerous things in themselves. Radioactivity becomes scary if we don’t consider it in a scientific way. The same happens with ghosts. I wanted that samurai was an energy concentrate and this is the reason for it is radiant.

P: Why do that dangerous sculpture join the idea of danger to her small size?

S.G: I want to concentrate samurai’s power really to the maximum; sacred and precious objects are always little.