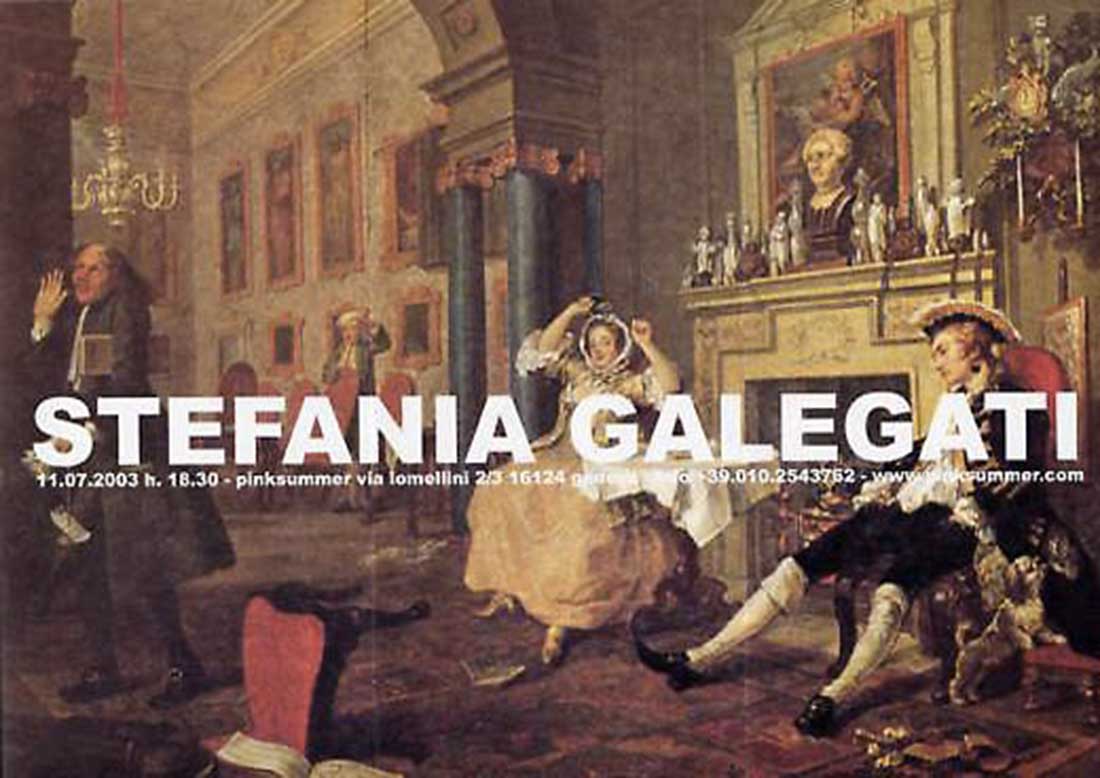 Pinksummer: The rewind series, the ghost canvas, the sword forged with the iron meteorite, the video in which Ivano Marescotti runs into another dimension, the dwarfs and the radioactive samurai. Looking it backwards and prospectively, your work tends to suddenly reveal mysterious aspects of reality in some ways intelligible of daily life. You move from day-to-day to bring in a vision of the real that goes beyond the canon of rationality. Do you believe that reality is the bridge to access other possible worlds or you are simply interested in those extra-logic realities to affirm that nothing is obvious?

Stefania Galegati: Those two possibilities do not exclude each other. I like when reality is so intense that collapse on itself. For example when I had in my hand the meteorite the first time I was excited: I was thinking that it come from a zone between Mars and Jupiter, but what I was holding it in my hand, it was just a piece of iron.

P: In a time in which diversity breaks in powerfully through spectacular attacks to western culture or through viruses as SARS, ancestral fears come up as drown bodies. Your work seems to affirm a sort of pessimism toward progress and human knowledge. Mystery annihilates the concept of knowledge and in some ways of defence: if you are afraid of thieves, you install a reinforced door, if you are afraid of Dracula you resort to garlic and cross. Cusano stated that our knowledge is as the polygon related to the circle in which it is inscribed, the more sides the polygon has, the more it comes close to the circle, but it will never get to coincide with it. To know means to compare with defined objects: when it is impossible to compare there can still be knowledge?

S.G: It is not in the intent of the work to have a pessimistic attitude toward progress and human knowledge. The reference to mysterious or dangerous things has always a function inherent to the individual work. Anyway, I do not mean to carry out some sort of psychological terrorism through my work, rather to use critically the general psychological reactions related to some subjects: for example the samurai is radioactive, but much less then the places bombed with uranium; the ghost stories disappear into the canvases, the piece of meteorite has been used to manufacture another object… there is always a sort of lightness and distance touching those subjects. So, back to your question, I think that knowledge is a necessary trend. Maybe we have to be more attentive and informed to recognize that events producing collective fear are often used by someone very powerful to enlarge and protect his own empire. If I think of world mysteries in this way, I would like to search for the real reasons for the Iraq war, the death of Enrico Mattei, Moro, the Bologna slaughter, Ilaria Alpi, the consequences of uranium… well I could go on for a while

P: In the samurai installation the idea of small coexists with the idea of power and danger. In our quantitative and materialist culture the strength is in the extension and not in the concentration. Is it as a kind of critic to materialism?

S.G: No, the samurai doesn’t mean to criticise anybody. Often people ask me if the samurai has political intentions, but that is not the case: I’m interested only in the added value that the idea of radioactivity can carry in respect of the whole work. Even being small is necessary for him – to increase his density.

P: Yours ‘ghosts’ paintings have stirred up some perplexity among those that know you work; they have a kind of naivety and narrative that may annoy. Once you said that you don’t want to meddle in any ways the history of painting, what do you mean?

S.G: To use painting is dangerous because it has a so long and complete and untouchable story. A good answer can be that nobody knows if those paintings are made by myself or I had them executed by someone else. Even the photos of the rewind series are naïve respect the history of photography or the videos are so respect the tv, but in those field none has anything to argue. The project itself needed that kind of painting; I want the story to be naïve but frank, tired and fearful but light. As it bring to forget the details of the story that in some ways it tells.

P: The idea of place is a concept around which a lot of your works rotate, including the project that you’ll show at pinksummer. It’ simply about searching for the right location for the project or the places themselves are suggesting you the project?

S.G: I think that they always help each other. The project is only similar to the first idea. It has been somehow casual to run into an unpaved road after days wandering around in search of landscapes, and I found this place. I felt immediately that it was the place I was looking for.

P:You showed us the studies of the photographic project that you will present at the gallery: the place seems ontologically disconnected from the characters that cross it, the place remains empty and the human presence is puzzling. Why?

S.G: Because it is about an abstract idea of travel, that is a place of transit. The characters, on the other hand, adapt to a slowness and melancholy of the place. Nothing happens, none does anynothing, but time can be read through, reading even if slowly.

P: In making this last photographic project, almost a movie sequence, you used Photoshop. We have strong prejudice on digital elaboration of photography, which has been utilized to obtain spectacular effects and to disguise the absence of ideas. You never used computer elaboration for your photos, so why did you use this technique?

S.G: We have not to hate the techniques. Once I hated engraving, then I discovered some beautiful engravings. I hated also Photoshop because it was deceptive, I thought it had no ethic… but I think that in the nineteenth century even the beginning of photography induced reactionary feelings. I needed Photoshop to distort almost imperceptibly the reality, because this is a painting operation.

P: Why in the invitation card you used an image from Hogart’s ‘A Rake’s Progress’?

S.G: In the past years I have been looking into a small Hogart book from time to time. His paintings have a very slow reading time, there is always some new characters to discover and there is a constant melancholic decadence. I thought it could give a good interpretive key for this new work of mine.