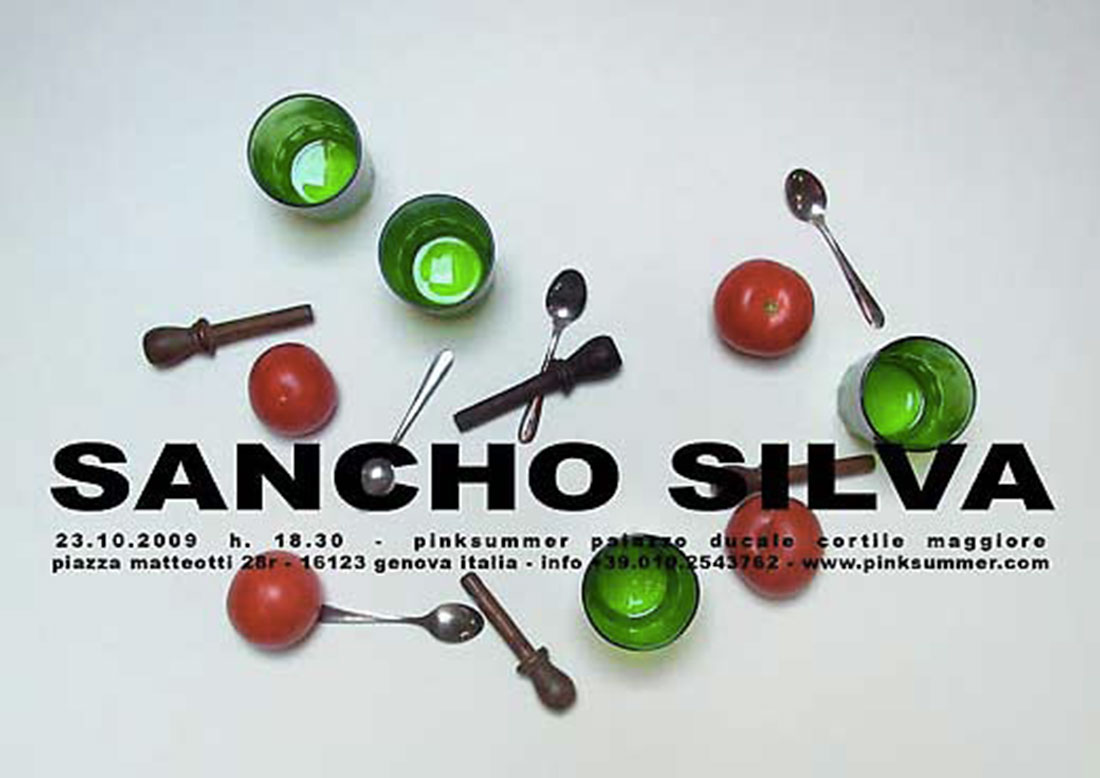 In his previous projects at pinksummer, Sancho Silva focused on what can be generally called the constructed structures of perception, of the artificiality of different components of the space-time framework that we inhabit and that constructs us as subjects.
In “Captor” (2003), he focused on the gallery as a machine of seeing and being seen. In “Cyclopean Eye” (2007) he focused on the city as a maze of infinite divergent trajectories, from the center to the outer limits.
And, in “Satellite” (2007), he focused on the technological mediation of our mental maps of a city as a consistent whole.
In this third solo show, Sancho Silva will adopt a different approach, rather than focus on elements that are structural and therefore enveloping and elusive, he will focus on what lies right at the center: objects we interact with in our daily lives, simple industrial objects like a broom and a fork, but also abstract objects like a number and perhaps also an art object. Projects that could be perhaps called object-specific.
Foucalt, in his introduction to “The Order of Things” wrote that his archaeology of knowledge comes from a text written by Borges that alters our millenary practice of the same an the other. Borges, in that text, mentions a certain Chinese encyclopaedia that classifies animals in: a) belonging to the Emperor b) domesticated c) sucking pigs d) sirens e) fabulous d) free dogs g) included in the previous classification h) that madly agitate themselves i) drawn with a very fine brush of camel bristles l) et cetera m) that make love n) that look like flies from far away.
Regarding this rediscovery of the ordinary seen under an impossible key, the show of Sancho Silva could be summarized in the question “which are the rules to affirm that a given object is?”.
The rules of this knowledge are always more suitable to determine the identity of things rather than their existence, since existence is not a predicate. Sancho Silva tends to give a basis to determine whether a thing is real or a hallucination, a fake or an image. In front of simple questions about the objects that structure our lives, sometimes we face surprises; ready-made, as to aesthetic process, is one of those.
But there is something worse: usually we work with objects like a table, a spoon, a tomato, but, for example in Indian philosophy, we read, you can encounter a stick that suddenly, in every moment, can become a snake. Knowledge is then not only a question of right description, can we for example define a table a painted table? Classic ratio with metaphysical implications would for sure consider to be a table also its image (generic object?), modern epistemology tends instead to define an object through a function, transforming it into a specific object.
In this survey about knowledge and its traps, Sancho Silva comes to identify the aesthetic object with the generic object because free from any instrumental approach, and, thus, he syllogistically assimilates the artwork with garbage, so with a series of objects where the idea of functionality is deceased. Guy Ben-Ner, for example, in his video “I’d give it to you”, solved the analytical problem of the unqualified aesthetic object reassembling it into a functional form: “Bull Head” by Picasso, a sculpture by Tinguely, Duchamp’s “Bicycle Wheel”, became a bike he gave his children to bike around the city of Munster.

To present or make objects present, Sancho Silva has thought of an archaeological setting inside the gallery, an arrangement that doesn’t change the substance of the objects themselves, so that a broom remains a broom, but rather transforms the way these objects are offered to knowledge. We believe all this has strong political hints.

After this introduction by pinksummer is the text written by the artist.
Remarks on Functions and Objects

To talk about objects is always to talk about limits. One needs criteria to decide when two given objects are actually the same. But to be given an object in the first place one needs to have already drawn a line or taken up a position.
Objects are not brooms, apples, planets but rather specific brooms, apples and planets. They always escape their conceptual wrappings, leaving a remainder.

In industrial capitalist objects the hierarchical society that produced them shines like a crystal. The first subjugation of an object to a function occurs with the attribution to that object of a predicate P( ). The object then functions as a representation of P( ).
Functional objects are necessarily disciplinary, they always instruct us on a choreography of gestures.
Objects can be presented again, or re-presented. As such they deny space-time. One object a is always actually a series of objects a1, a2,… at different space-time situations s1, s2, … . They serve to identify or correlate different points of space-time and thus are at the structure of memory and orientation. To abolish the object is thus to experience to liberate space-time, to experience it raw.
Consider the construction F(x) where F( ) denotes a function or concept and x denotes an arbitrary object to which the function is applied. If space-time is understood as a kind of mould for the objects that exist within it, then we could describe space-time as a function ST( ) that is applied to the objects in its domain. Starting with an object a, by means of the function ST( ), we arrive at a new transformed object b that is the image of a under the function ST( ). Thus, for example, to the convict a is applied a jail sentence J( ), resulting in a new traumatized person J(a) = b.
Traditionally we assume the functions remain the same while the objects they are applied to change. But does not the converse also hold? Would it not make more sense to assume that, in the process of being applied to objects, or a series of objects, the functions themselves also change, that the objects transform the function just as much as the function the objects? This would mean, for example, that when using a particular mop to clean the floor, it is not only the floor itself that changes but the mopping-function also. Or, in the case of the prisoner, that in the process of serving his jail sentence J( ), the jail-function itself changes, resulting in a new jail-function Ja( ) = a(J( )).

Objects usually indicate functions: they are usually taken for tools. In the process of referring to objects we frequently use a function that we associate with them, for example, when when we point at an object saying “that spoon.” This means that objects are often constructs of the form S(a), where S( ), refers to a function that is supposed to be performed by a sub-object a of the original object. Often this sub-object may then itself be further analyzed into a new construct of the form a = Q(b), where b is a sub-object of a. If we repeatedly apply this procedure to perceptual object we will arrive at what we shall call an unqualified aesthetic object. Thus, for example, a particular wooden spoon s could be analyzed as a construct of the form

t = Spoon(Wood(…(x)…)))
where x is an unqualified aesthetic object that we envelop with these attributes.

Museums operate the core aesthetic function on the objects displayed inside them in that they displace the functional components of these objects to the background. This displacement is only temporary, however, for museums are quick to cover the indecently exposed object with its official clothes of class, value and meaning. Museums are places of representation and the objects displayed inside them are always used functionally to represent a school, a concept, a transcendence …
The unqualified aesthetic object is not encompassed by the “retinal.” In it we witness the suspension of the instrumental approach. Beyond it one reaches the undifferentiated magma of perception. The unqualified aesthetic object exists at the intersection of this magma and memory. In the face of it one experiences the anxiety of forgetting.
By misplacing an object one weakens its functionality. Misplaced objects grab the eye. Their mode of presentation is the puzzle.
One cuts through an object like a geologist to disclose its layers. Like plums, objects have seeds, bones and skeletons but no essences. Reaching to the abstract level of the skeleton one obtains a calculus of possibilities.

In discarded fragments of industrial objects we witness the decomposition of the instrumental approach. Dirty, deformed, shattered pieces of refuse no longer have the dignity or capability to represent much. In the decay of garbage into amorphous matter we glimpse the shadows of unqualified aesthetic objects. Implicit in the garbage-function lies a core aesthetic function.