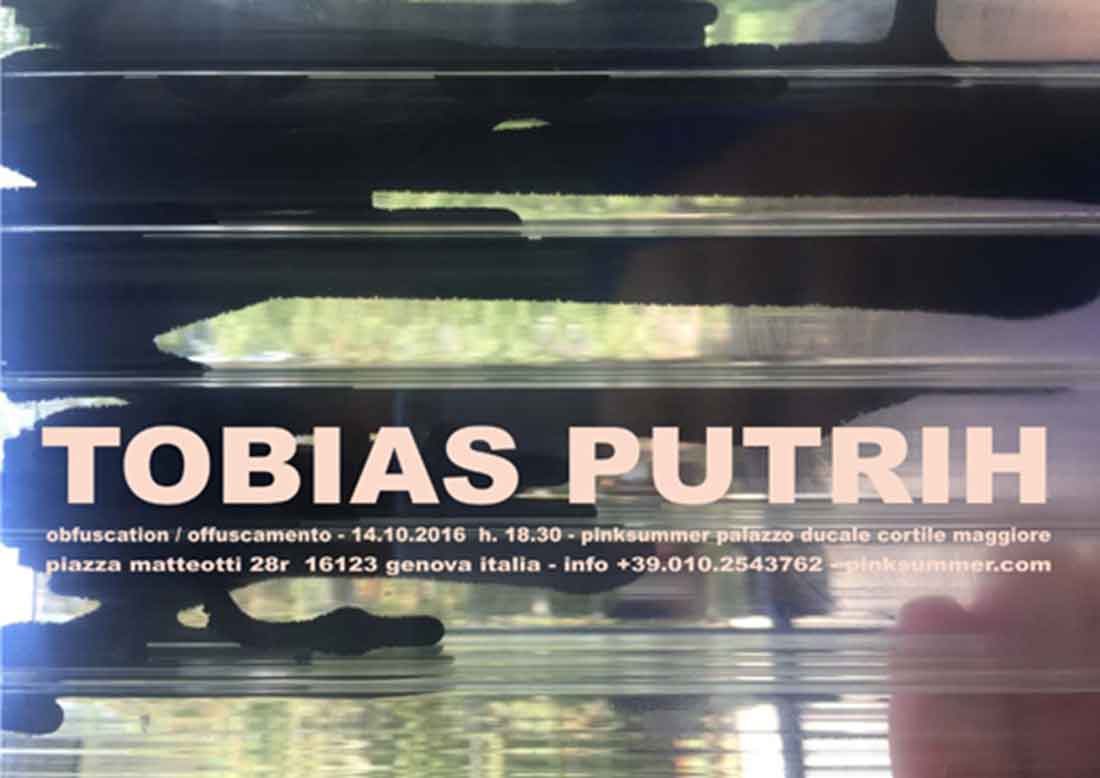 Please be advised that, apart from the actual set up information sent by Tobias Putrih for the preparation of Obfuscation, his third solo show at pinksummer, the following press release may be totally arbitrary as we have been intentionally sticking to his laconic explanation, without asking anything more. By dealing with obfuscation, our idea is to trace in hermeneutic terms the morphogenetic nature of an exhibition, which project, as it often happens in Putrih’ works, envisions chance breaking in and assuming a more explicit political meaning if compared to some previous works. The exhibition looks like some sort of homage to opacity, enacted through a simple gesture, that tends to exceed its irrelevance through repetition and participation, until it changes the gallery space in order let new ideas and concepts germinate and stand against the process’ founding asymmetry. Somehow, by doing so, Tobias Putrih seems to provide us with an in vitro model of social revolution based on the energetic potential of any marginal gesture of protest, that, by obfuscating the given pattern, would allow to improve “a-utopically” worldwide welfare, just by throwing sand in the gears of hierarchies.
It comes to our mind 17th century “trattatello” by Torquato Accetto Della dissimulazione onesta (On honest dissimulation), published in Naples under the Spanish domination and discovered later by Benedetto Croce in 1928, a time devastated by other oppressors, right here in Genoa had its first critical edition, edited by Salvatore Silvano Negro with a forward by Giorgio Manganelli, part of a series of books directed by Edoardo Sanguineti for the publishing company Costa&Nolan in 1993, year in which Silvio Berlusconi founded his broadcast company Mediaset and took the field by launching Forza Italia, that became a center-right party in January 1994. The publisher Carla Costa has told us that Luciano Lama, the “moloch” of CGIL (Italian workers union), who would rather like common democratic fronts than dividing utopias, on the occasion of a meeting with Confindustria in Genoa, held in his hand a copy of that fine 17th century handbook where is written: “Dissimulation is a way not to let see things as they are. What is not there is simulated, it is disguised what is there” and also, “As soon as the first man opened his eyes and knew he was naked, he managed to hide himself from the sight of his maker too; therefore the skill of hiding was almost born with the world itself” and finally, “the excellent dissimulator remains unknown forever, as he acts in the search of common good”. Basically, Accetto’s moral treatise does not incite to act in the fog of lie, but to practice the obfuscation of disguise to maintain the being-property in difficult times.
We think though that Tobias Putrih’s Obfuscation refers to a more recent eponymous handbook: Obfuscation. A User’s guide for privacy and protest by Fint Brunton and Helen Nissembaum, both researcher at the New York University, issued in 2015 by The Mit Press. The authors of the handbook declare right away the intention to start a revolution that has nothing to do with squares and the barricades, but that grows up little by little through obfuscation, meaning deliberated construction of ambiguous and misleading information aiming to interfere with and slow down the pervasive surveillance of Google and Facebook. Such “data based empires” turn information into knowledge and knowledge into profit in a completely asymmetric way in respect of their users. By drawing examples from human history and the animal world, the authors urge to informal insubordination actions, not coordinated, as daily practice of resistance against the hierarchy and power. Same as thousands colonies of small anthozoic octopuses make up the coral reef, thousands of marginal gestures of insubordination and obfuscation, very difficult to repress, create political and economical barriers. The authors mention some software such as TrackMeNot, Ad Nauseam, and Tor network, that do not delete our tracks from the web, but generate fake searches.
Finally, here are the notes provided by Tobias Putrih on his project Obfuscation, verbatim quoted: “Clear, transparent multilayer polycarbonate panels are placed along the walls of the gallery. A group of people gathers and pours the paint through the inside channels of the polycarbonate and as it drips down the panel’s interior walls it creates lines and patterns. Transparency of the wall is slowly decreasing. Puddles of paint form at the bottom. Process is recorded through the gestures and edited in a series of small black and white prints.
The goal of this process, is to make simple gestures, to make prototypes of accidental objects, a space created gradually by succession of small actions which after many repetitions produce a final result not controlled by any of the participants.
The process becomes a play, with a loose rule and a play leaves a trace and its own visual vocabulary”.
The show will be the result of a workshop with six people that will happen few days before the opening of Obfuscation in which together with the paint will be used wool, liquid hot chocolate, paper.