Why should not we enjoy an original relation to the universe? 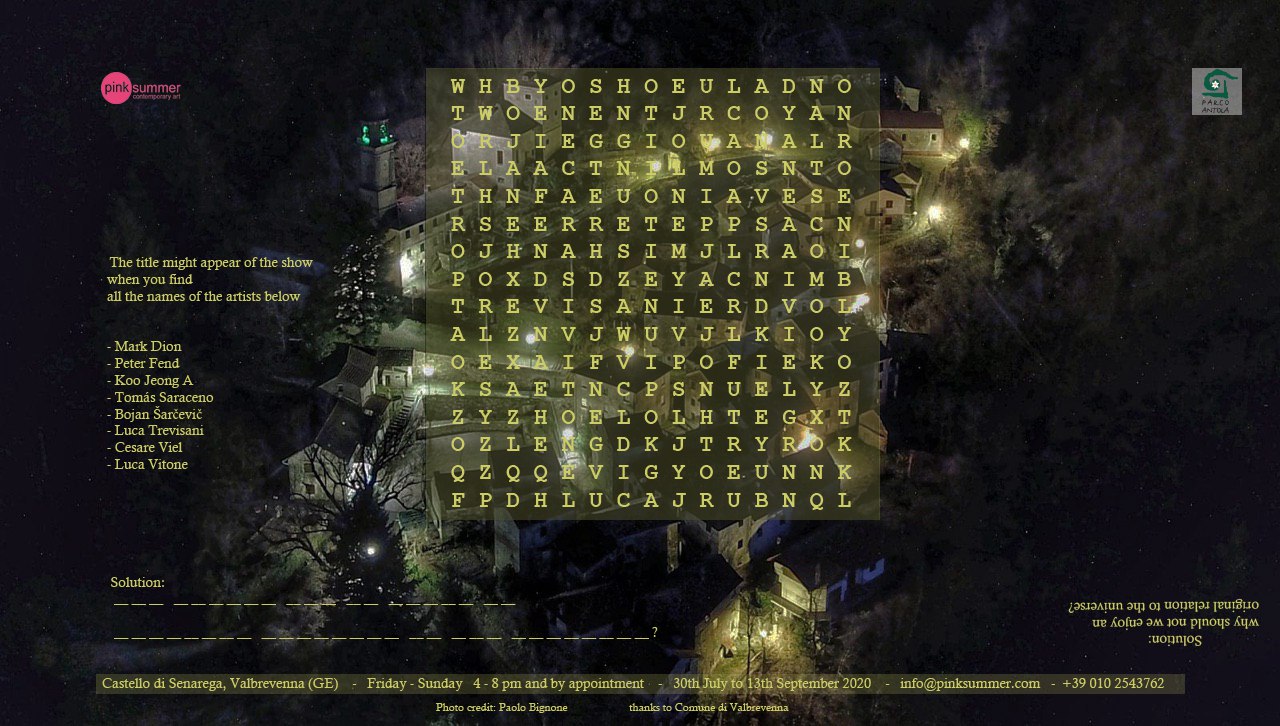 Pinksummer goes to, after Rome and Palermo, will go in the countryside in the castle of the small medieval village named Senarega, in Valbrevenna, at the feet of Mount Antola, a very dear one for the Genoese. The name derives from the Greek word ἄνθος (antos), which means flower, therefore flowery mountain where a sixteen years old Albert Einstein (Ulma, March 14th, 1879 – Princeton, April 18th 1955), on the street from Pavia to Genoa, spent a night, looking at that mysterious sky for the first time, at the odd orbit drown by Mercury. But then this year, nothing feels more appropriate than a vacation in the countryside, and the following otium, to refresh before eventual travels or holidays, in a future that we can’t redraw yet in a confidential form.
A middle summer show, that will open the Fieschi castle in Senarega at the end of July, that will be over very close to the fall. For the title of the exhibition we got inspiration from Nature by Ralph Waldo Emerson (Boston, May 25th,1803 – Concord, April 27th, 1882) which says: Why Should Not We Enjoy an Original Relation to the Universe?
Friedrich Nietzsche (Röcken, near Lützen, 1844 – Weimar 1900) himself got inspired by Emerson when he was imagining The Gay Science in Genoa.
An exhibition to think about a time, our time, when we don’t seem interested in looking at a direct relation with nature or God, both collapsed in the myth, but differently from our ancestors we got to see the biopolitics in action with our own eyes.
The network of powers that manages, or better is managing the body discipline and the regulation of the population. To speak with the
words of Michel Foucault (Poitiers, October 15th, 1926 – Paris, June 25th, 1984): an area where power has access to the body to guarantee life. A space where the law has been substituted with the norm, ductile and malleable on the circumstance as molten metal, that guarantee to power a no man’s land of the state of exception, that Giorgio Agamben (Rome, April 22nd, 1942) feels, in the ultra-modernity is becoming, for some reason, a habit. A norm that in the last few months transformed to a worldwide level in a poisoned distilled of pure terrorism, beyond linguistic aberration of indicating a slight spring rain with the word “alert”, followed by the one indicating the color yellow.
Why Should Not We Enjoy an Original Relation to the Universe? will present work of art by eight artists represented by Pinksummer: Koo Jeong A, Peter Fend, Tomás Saraceno, Mark Dion, Luca Vitone, Bojan Šarčević, Cesare Viel, Luca Trevisani. A show with a fragile intent, to claim full life, burning as if it was a straw and rags scarecrow, the nude life. A passage, like those celebrated in the mountains, to chase away the winter with a fire ritual and welcome regeneration.
A ritual exhibition in the steep mountains of a valley in the Ligurian Appennines, to celebrate the right of the individual, young and old, to subjectivity and intersubjectivity, even inter-species, to freedom and the satisfaction of true desires against any science or statistical or sociological discipline that has dragged us defenseless in the wake of a fake and scaring normality in relation to biological activity.
An exhibition sprouted to remind us that something deeply dystopian happened, and that occurred in the frame of pervasive and deviated neoliberalism, perhaps even pathological, that tends to flatten nature in the ecological-environmental echo, making us forget that when nature wants, can be really evil, even with humans, without any exception, composing and dissolving us almost as if we were clouds. Nature that asks our body and intelligence to adapt continuously. Nature that has no equal between beings for its perfidy and its instinct of beauty and we could never race against it on indifference.
A vicious and anti-ecological exhibition, like the closed circle of Giacomo Leopardi (Recanati, June 29th, 1798 – Naples, June 14th, 1837) poetic through, between man’s tedium and heroic titanism, which could, with some disinterested adjustment, stop considering us, humans, as locusts of the planet, or even comparing us to the meteorite falling on the Yucatan, or the giant reptiles, consumers of prehistory.
Human is in fact an exception between all the species, and our reckless humanism we know that even amongst the best beavers that build dams, there isn’t any Galileo Galilei or any Michelangiolo. The show is an invitation to take a break, briefly, from the blatantly neoliberal hygienic and sanitizing framework of bio-politics because, beyond the misanthropic chatter of the gnome or the goblin of the Operette Morali (Moral Operettas), even Giacomo Leopardi recognized that heroism of the human race lies in the awareness. Some works presented in the exhibition are unpublished, fresh from production, others are phantasmal like dreams, all are humanized and humanizing in the most positive sense.

The exhibition will be open from Friday to Sunday, from 4 to 8 pm or by appointment