Bojan Sarcevic – Everything makes sense in the reverse 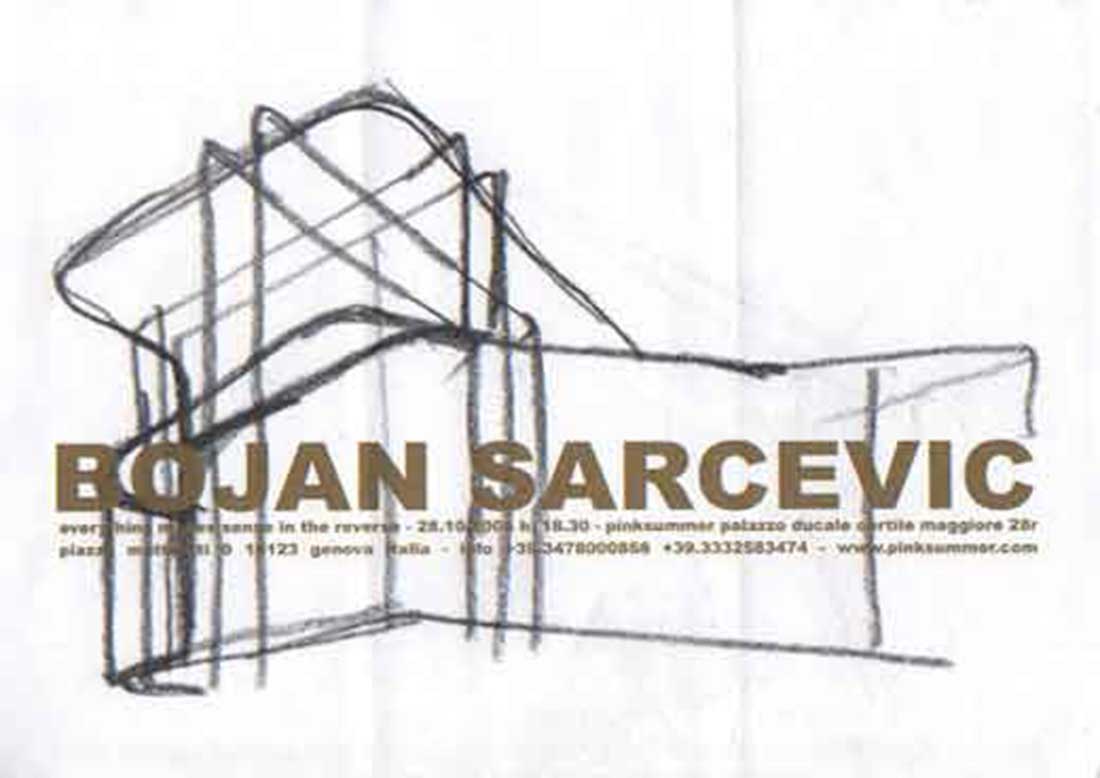 Pinksummer: “Everything makes sense in the reverse” the name of the big sculpture that gives the title to the show that you will show at pinksummer. People say that in the infinity, that as such escapes any kind of proportion, the ‘coincidentia oppositorum’ occurs. A Renaissance philosopher stated that if from the concept of infinity, that is something at the same time exceedingly big and exceedingly small, we subtract the idea of quantity, maximum and minimum coincide being two superlatives. The idea of infinity is beyond any affirmation and negation, in God, as in another time philosophers called the absolute, all the distinctions that in creatures are deemed opposite coincide. Do you believe that any creature, any finite existence, finds his meaning in his cause, as a piece of a mosaic?

Bojan Sarcevic: Well, no, I don’t exactly believe so. As far as the opposites are concerned – opposites of any kind- I will always stand for the other one, the one that doesn’t fit, the one that is too big or too small, the very one that disturbs the mosaic. To my sense, there is no meaning but in the movement of research or in that quest for the whole. That is why I do not believe that any creature finds its meaning in the cause and to be more specific I do not think that any creature can go so far in the understanding of the perfect enigma of life.

P: But I do believe that all the creatures are meaningful in the research of that cause. Fortunately, we never get to that point and can always try better, but if we think we did reach that point, the doctor is necessary. Nevertheless, sometimes we sense fullness and I guess that is in moments when we reach our limits and while doing so we recognize them as ours, our owns, which is another way of saying by accepting them.

B.S: I guess I’m too old to desire the absolute and still too young to loose my eager curiosity for the unknown. In other words, I’m romantically utopian about the middle position. By the way, the creatures we talk about are science-fictional, philosopher’s and psychoanalyst’s working material. As an artist for me the real, is that mouse being eaten by my cat in the garden.

P: Reason, being dialectic, affirms and denies, the analysis keeps separate the opposites, according to the principle of non-contradiction. Once you said that when we’re looking for form, we are in the analysis, when forms seems imposing in itself by combining perfectly with the background, then the absolute becomes manifest and then existence reaches its fullness. Do you think that to see the transcendent in the immanent we need to reach a superior form of knowledge, which with an act of intuition could catch these rare moment of light when the opposites coincide? Is this form of knowledge that you call spontaneity?

B.S: Yes. Perfectly. Real spontaneity is nothing but a very efficient lie, maybe the most efficient one. A spontaneous movement is the one that seems to embody the nature’s simple flow but that in reality is a result of a very complex intellectual, moral and affective process that comes only through real time experience. The highest spontaneity would be like sublime Mathematics, what you call the superior form of knowledge. But let’s not kill the magic, we’re incapable of getting to that point of logic, although we’re desperately trying to.

P: That’s why beauty exists, in the understandable. Being spontaneous is making connections between things as if those connections were waiting to be revealed. It’s being faithful in things and our relation to them. Intution is the feeling of that link, of the bound between each thing, I guess this could be something you call the superior form of knowledge expressed in an act of intuition.

B.S: The concept of spontaneity considered as a superior form of knowledge to which we should aim, and thus meant by you as “the result of something” is pivotal in your work. Man, unlike animals, must reach spontaneity avoiding determination, in order to stay in the world as water in water. It reminds us Thoreau when, in “Walden”, wrote :”Think to those ladies that prepare for the last day of their life making toilette pillows being afraid to betray too strong an interest in their own destiny: as if one could kill time without hurting eternity”.

P: Once you told us that art or death have the task to reveal life in its fullness. In the light of this quest for spontaneity, the first part of your search, including also the show about “leftovers” exhibited in 2002 at pinksummer, appears to be preparatory to a sort of “second navigation”, even though still in the sensible. Your first works always aim at creating a distance, a non-conformity, to break the chains of determination and have the world speaking again to our essence in an immediate way: “(…) Before pronouncing the ancient lost word, searched in vain, one needs to dissolve the constraints that prevent pronouncing it” (Elémire Zolla)”

B.S: Break the first beliefs. Create the distance. Change the point of view and change it again. Those are maybe the most difficult tasks one is bound to accomplish. How hard is it to get out of the circle? Very hard because this paradox hurts: if we really want to be part of it, in full consciousness, we need to step out of it. And only like that, having one foot out there, we can really feel it turning around without being taken in the whirl. The transition has nevertheless to be subtle and permanent. Criminals want to change the world as much as the artists, but they step out of it without thinking their way back. Dissolving the constraints is always a violent act and potentially dangerous if one loses the sense of the necessity of the both parts “in and out” and of the unavoidable tension between them. There is no solution but to repeat the question in a better way.

P: The new big sculptures that you exhibited at BQ and the one that you are going to exhibit at pinksummer have a harmony that induce the pleasure of contemplation, they don’t seem built, but grown on the humus of symbolic relationships with things. When you sent us the picture of one of the small sculptures (made out of an old piece of wood, taken from an old house, pierced by a brass structure, which you describe as an organic, with two thin threads, red and green, crossing over, it seemed to us something strong and weak at the same time.

B.S: It made us thinking of the old sailor Santiago by Hemingway, who is unable to surrender to destiny, keeping a stoic relation with reality. You wrote in one email that you thought to display the small sculptures near to the big one to create a sort of echo. The small sculptures seem like a symbol of human dignity. Tell us about your sculptures.

P: Well I wouldn’t go so far as to explain my own sculptures in a moral or moralistic way. Anyway, I do not think that has ever been the purpose of art. But I do recognize to some extent what you mean and I like the fact that your analysis reaches those dimensions (dignity). But for me the essentials are the different natures of materials and the forms and their interrelations building up a meaningful structure. I talk in measures, I understand the color shades.

B.S: Their aim is to express the moment where the very mechanic, the pure materia put into a certain formal context suggests another level and opens the possibility of a coherent language. It becomes then impossible to decide whether the impression of organicity is the result of such encounters or the origin of our affective understanding of their echoing.