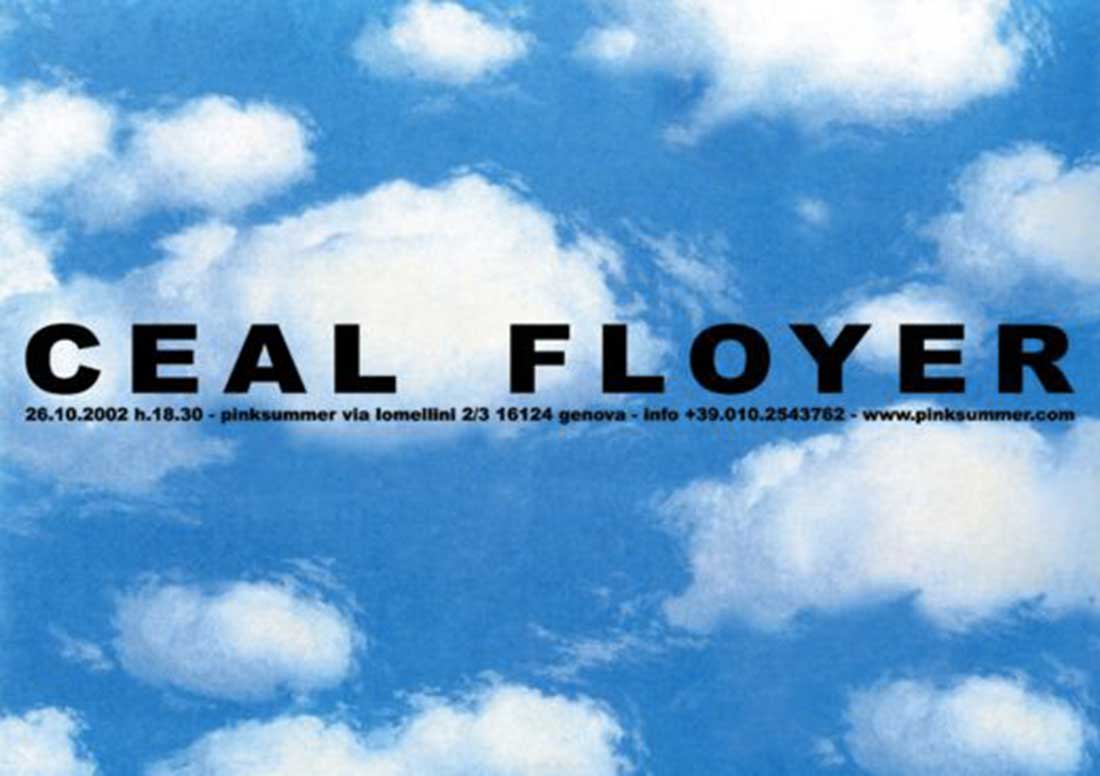 Regarding Bach, a friend told us that along with to the baroque element of virtuosity and redundancy, his music contains the gothic element, with a more structural nature, and the conceptual one; concluding, he said that even if accustomed with Bach’s music, or possibly for this reason, we sure hear less than what it really contains. The same feeling of seeing less of what they contain is experienced when we are in front of Ceal Floyer’s works and in fact, in spite of the dry and cool aeshetic limiting these works, when we try to translate them in words, for every idea that we are able to put on paper, many others seem to go away in all directions.
In defiance of the retinic minimalism inside which Ceal’s thought reveals itself, it is excessive of that kind of excess shaped by the analytic obsession that brings logic to crash against the absurdity of parodox, that, to be precise, differs from non-sense.
In the work “Hysteria” Ceal has multiplied the adhesive shape of bird we find sometimes in public places to make window panes visible, transforming it in a mad flock that covers his same reason of being (the effet covers the cause).
Once Ceal told a story: “A woman walks into a bar, goes up to the barman, and asks him for a double entendre. So he gives her one”. Ceal behaviour with words is the same of Duchamp with real objects: she hangs them in the metaphysic place of atelier. About her work Ceal has said: “It’s like mentionning the obvious but in a different tone of voice”.
In this sense Ceal’s work is life-sized for his scale, but more in relation his essence that could be thought like a re-discovery of ordinary life.
Language and its irreducibility to the visible are central problems in Ceal’s work, the artist compares her effort to fill the place left empty from the lost similitude between words and things with Sisif’s fatigue. Ceals tends to force the language bars like a barrier of our ability to think things, revealing an unexpected way to see the same things, indifferent to the common place. We could also say that Ceal goes into the no-place of language to get up at materiality the words sleeping on their nature of signs. The objects, ready-made, that Ceal handles, are – by no chance – close to the idea of universals that philosophy gives us; think of to bucket of “Bucket” or of the light-switch of “Light Switch”, or again of the bulb of “Light Bulb”. The problem of universals is that to give to real objects an ontological essence.
Wittgenstein stated that we learn words in some contexts, thereafter, we are able to understand when they can be appropriately used in other contexts and projected again in other ones using secondary and methaphorical meanings. To keep an universal, to understand a word, is not simply to learn a sign or a song, but it is to understand that it refers to a object or better it mentions the complex of common characters of objects limited by the extention of a object. When we affirm that to know is not to see or to show, but to interpret, we refer to this ability of projection in different contexts, as much language can be elastic and tolerant, we mean that object, activity or event have to induce or to allow this projection.
The structure of language is made so elastic by Ceal’s cultural practice that it transforms itself in persistence and variation, simultaneousness and changeability, allowing us to extract order from ordinary, absolut from contingent, universal from particular.
For her second solo show at pinksummer Ceal Floyer will present a sound installation built on all interpretations she finds in the market of the “Goldberg Variations” by Bach. The “Goldberg Variations” move from a popular tune that Bach declined, in 77 minutes for harpsichord, touching the most abstract, conceptual, and refined forms. Bach used to say that he composed music for the glory of God, implying that he found the divine also in the most simple and ordinary things.
The second work to be shown at pinksummer is ”Helix”. Helix is a plastic shape carved with circles of different diameter: large, medium, small, very small. For every hollow circle of Helix, Ceal found an ordinary object, like smarties box, a telephone coin, a pen, that perfect fits into the diameter.