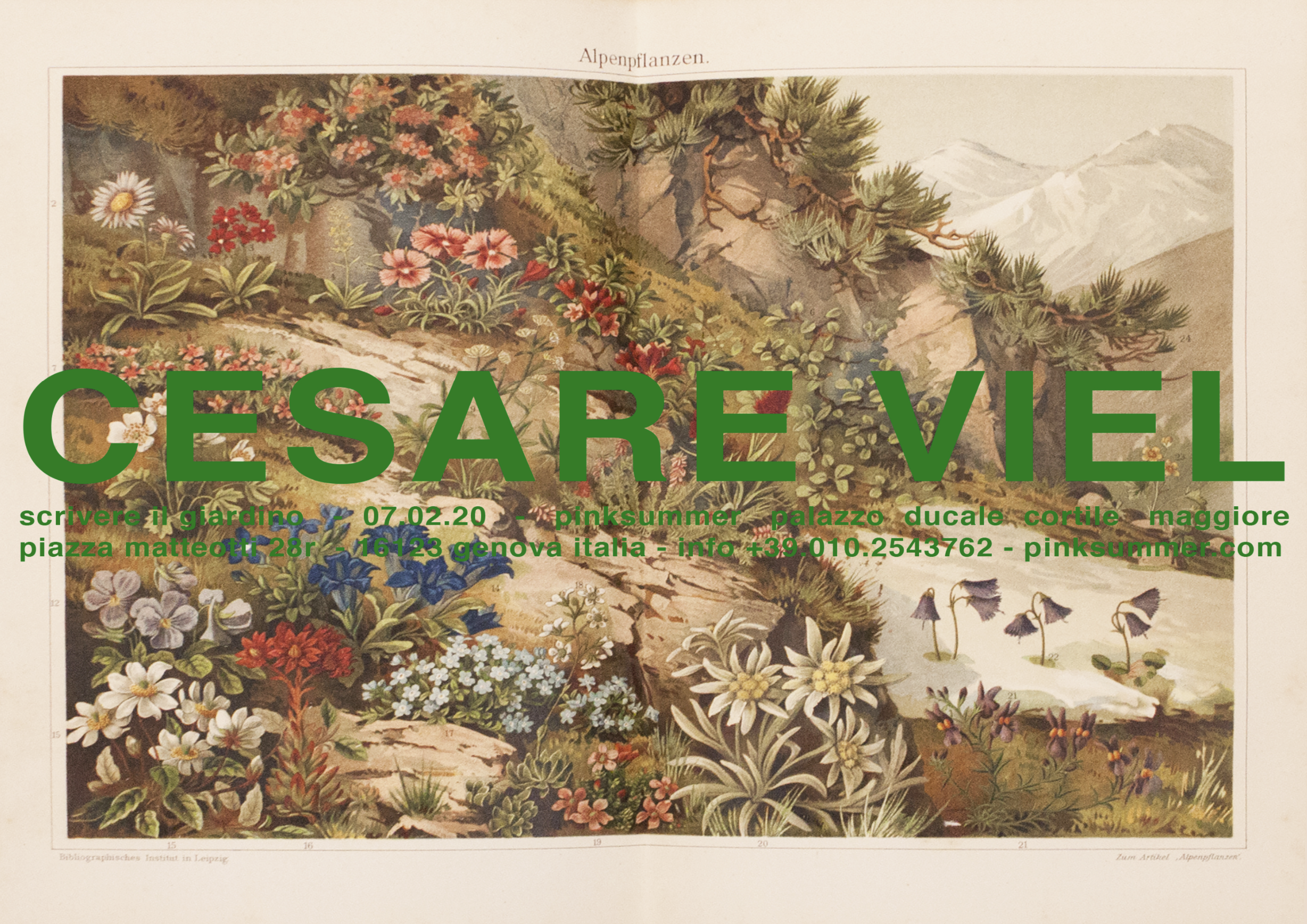 Pinksummer: Your father for sure wasn’t a wet guy. Your artwork Il giardino di mio padre (My father’s garden) presented at PAC in Milan during your solo show Più nessuno da nessuna parte (Nobody anywhere anymore) made us think about the last episode of the second season of the TV series The End of the F***ing World. In particular at the end, when James (Alex Lawther), convinced by Alyssa (Jessica Barden), goes with her under a flyover to spread the ashes of his father that he is taking with him since a long time. James clumsily tries to spill what’s inside the golden industrial urn, but what comes out is a grey mush that just splatters on the ground. Nothing flies. James justifies the fact without being surprised, considering that his father, when he was alive, was always a bit wet. Alyssa then, in her very flat peculiar way, says that dying is bullshit, because we lose everything.

The area under the flyover was the place where James’ father and mother met for the first time, such horribly squalid that Alyssa asks James if his parents were there because they were tailing someone. James answers that that place was a park before being underneath the flyover.

Who knows if being a parent implies any kind of stereotypical position, accompanied, also in some antiheroic cases, by an affectionate negative acceptation. On the other hand, the best parents should hide themselves from their sons and daugthers in order to become role models, the models, just like writing does with words and the nature with us all.

The objects you were taking out of the ground in Il Giardino di mio Padre (My father’s garden) don’t disguise any sense of aridity in their perception.

Which question would you like to be asked on this work? And then, eventually, how would you answer?

Cesare Viel: I had a very silent relationship with my father, sometimes also very distant. The question could be: What did bring me to imagine and to want making a work as such? A famous verse of the Persian poet Rumi says: “Beyond what is right or wrong there is a garden, we will meet there”. Well, maybe, first of all, the desire of a reconciliation. Putting down the weapons, sitting down on the edge of a relationship and finally listen to the silence. And to walk in it. Slowly. If art has any function, that is making us to perceive simultaneously the entire range of emotions and thoughts enclosed in a situation, real or imaginary, that we lived or that we could live.

Ps: If Socrates could be among us as a friend or acquaintance of yours, he would draw you in a very dense dialogue about the title that you chose for your fourth solo show at Pinksummer, Scrivere il Giardino (Writing the garden). They say he was very skeptic about the written word, he used to sustain that once composed, a book is something dead: everyone can interpret a written work as he like and, consequently, that is an illusionary knowledge. He would say that the garden is a privileged location of the philosophic practice expressed in the dialogic form, marked by the rhythm of thesis and antithesis, as they were two nightingales replying from a tree to the other.

The garden is a utopic space par excellence because gardeners live for the future, they have to foresee what could be, something that is not yet.

In this sense, we too feel as we were gardeners and we imagine that your garden, even though written, will never become a book, since your writing doesn’t subtend to narrativity, not even to the feeblest and disenchanted of the narrations. In this sense, your sentences are like seeds, and even if words themselves are not so prone to comply to gravity, your phrases are like the seed bombs in green guerrilla. You have always been a polite activist, but as every activist you want a better world. Tell us about your sententious writing and the difference, and also about the future. Imagine what question about tomorrow you would like to be asked.

CV: The garden is a world, the sentence is a world. Garden, world, sentence get intertwined and reflected by each other. I don’t know if Socrates was right about writing, but I know that for me that is an infinite dialogue with the surface, on which everything slips away and rolls down. Writing hands out a plan, as a hand passes a plate, in the space. A page, a sheet, a face, a body, a curve, a word, are surfaces of different nature and size. Now writing sentences means to me, mostly waiting for the right calibration and porosity in the thoughts.

Set different planes in mutual contact. And see what happens.

I wait for questions to emerge, little by little from the bottom, as sounds inside the body. There is a different eternal return of sentences written in this garden created for them. Resistant guests, shy and strong just like the flowers, the plants and the memories.

Before starting any project, why do not walking amongst the trees? Let the intentions grow as trees do. This is now my question-whish on tomorrow.

Ps: The spontaneous forest was followed by the orchard, the garden. In Sicily they call “gardens” the orchards. In the Cantico dei Cantici (Song of songs) is written: “As an apple tree amongst the wood my dialect amongst the young people. Closed garden you are, my sister, wife, closed garden, locked fountain. Your buds are a pomegranate paradise, with the most delicious fruits, Cyprus trees with nard, nard and saffron, cinnamon with every species of incense tree, myrrh and aloe with all the best scents..”

Don’t you think that our idea of garden, comparable to the idea of Eden, of lost paradise, refers to the failure where the disobedience of original sin brought us?

Do you think we treated the world and all the other human species, animals, plants and minerals badly, to call us outside of beasty attitude for which we thought we didn’t suit? For a myth, a belief, a superstition?  Is the wall we built to separate from nature the origin of our progress, our garden? Is it still possible to change the direction of the writings?

CV: Hortus conclusus, cloister, orchard.. In the history of garden desires and real needs of reflection and philosophical speculation, plantation, growth and maintenance of the biological cycle resound. The nature and the forms of the garden have changed in time as if they were transformed in our language and in our culture.

As a matter of fact, the garden always asks as us a question about the origin, the starting point and the direction we want to take. Nowadays we are living such a complex and difficult time. Our choices on environment will be crucial to the future. Such important planetary issues, of such a scale, make us quiver. I feel like I was out of scale. A tiny point lost in the sand. Here it comes, then, here, the moment to sit in the garden. Everyone as he can and manages doing. To spend time apparently doing nothing, to rest and prepare the required energies. To allow ourselves some garden moments in our life. Maybe this is the only way we can start thinking at changing the direction of the writings. To act the pause, to develop a different form of activity.

Ps: The important gardener Gilles Clément, author of Le Jardin en Movement (The Moving Garden) conceives the world as a garden, a planetary garden where we all should be careful gardeners.

He states that in every public space, in every garden, we should always leave an uncultivated space, free from any hand, any design, for the pioneer species and for the pollinator insects. To leave the nature a void to develop its own energy. Your attitude of acting the writing reflects sometimes some sort of attitude facilitating immobility and silent enchantment. Does the void you create tend to support the tropism of the unpredicted?

CV: Absolutely. Consciously listening to the training of the garden, with its slow times, its waits, the lights and the shadows. I find fundamental Clément’s idea of leaving a portion of free space, uncultivated. To open some crack. Making space. I consider free spaces, and to let them be, vital for any project, relationship, gesture or thought. The void and silence: essential ingredients to accept the unpredictable and support the movement of things. Between my written garden and the “garden in movement” by Clément I feel a very big similarity, an intense resonance.

Ps: When speaking about Monk’s House garden, Virginia Woolf, on whom you worked many times, seems to furnish it like Clarissa Dalloway in the same novel prepares, since the early morning, managing fullness and emptiness, her night party.

“Leonard and I bought a field and we are making ambitious projects of any kind to put terraces, kiosks, ponds, water lilies, carps, gold fishes, statues of naked ladies and figureheads of war ships that reflects on shadowed lakes”.

The image of the invitation of the exhibition Scrivere il Giardino (Writing the garden) is very beautiful. What are you presenting at Pinksummer?

CV: The invitation is an image taken from an illustrated encyclopedia of 1908, owned by my grandfather.

Leafing thought the pages of those volumes in German and looking at the colored illustrations has been an emotive and mental experience. An entire unpredictable world has been revealing itself to my eyes. I meant to do the same in the gallery. Opening and carrying out a garden world, to walk inside it, to stop, observe, read, meditate, experience. Past, present and future live together and collaborate in this project.

I imagined surface-sentences for an environment that can be experienced now but comes also from other times and affective worlds. Some written parts of this garden on the floor are personal memories of the garden of my family, in Trentino.

Together with the vast and horizontal garden-map, there are some new collages. Sheets from a silent herbarium of modular abstract shapes, that recur identical but always different.

A graft-sentence between Laozi and Eraclito. Secret and mysterious nucleus of the entire exhibition.