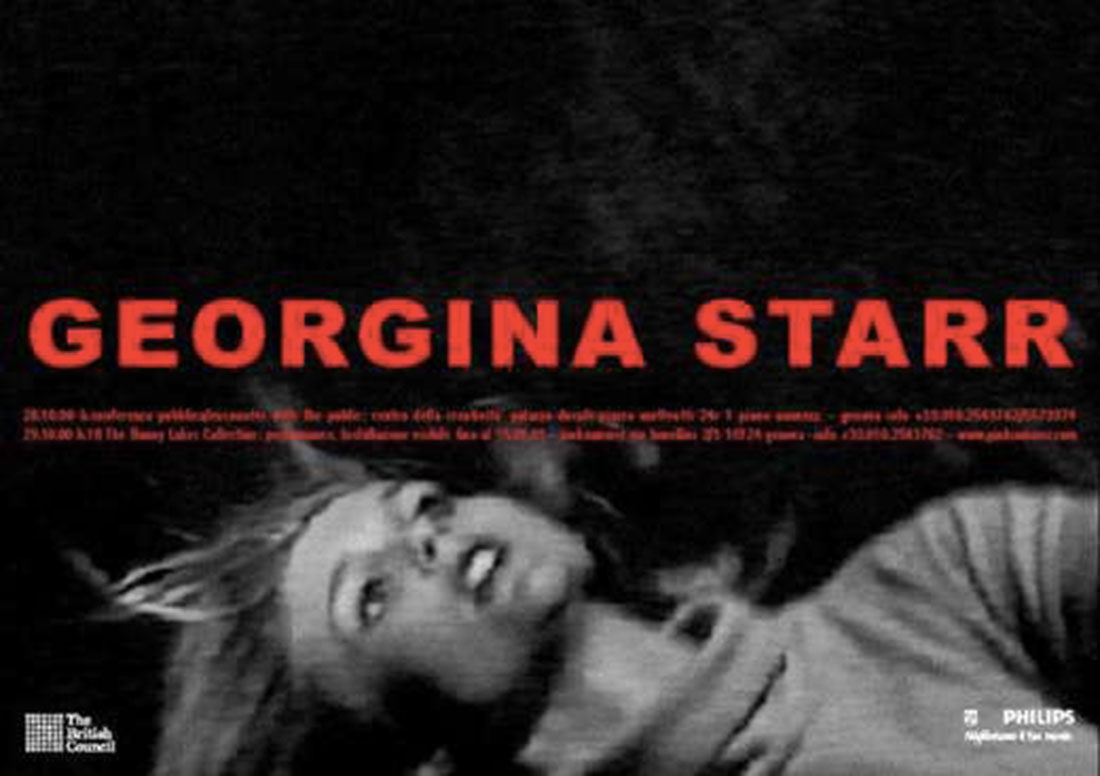 If one is accustom to having an analytic approach to contemporary art, in front of the production of Georgina Starr one has the sensation to be swept away by a wave: bang around to the point of loosing the categories of the up and down and only afterwards, on the seashore, to be able distinguish again the clean line of the horizon.
The horizon of Georgina is the portrait conceives like the dialectic synthesis for excellence between identity and alterity: the object of the portrait is the absolute subject.
To create immanence bubble for her universe, Georgina leans on a reality through a kind of appropriation and identification of visible and tangible things that, at the interior of her works, assume a new life, re-created by an infinite network of associations. Georgina’s work is an incredible melting of past and present, being and appearance, individual and pop imaginary, dream and fiction: it is a stream of consciousnessÊ in which is the memory melts the horizons.
Georgina holds out to us a conception of identity with a porous frontier, permeable to the world: identity dyes itself of alterity, alterity dyes itself of identity and here, perhaps, comes out that sensation of ontological instability which her works transmit to us. The idea that identity has been made by a multiple of fragments, each one is a full and independent personality: the numerous characters which Georgina interprets and by which she is interpreted.
In the entire episodic duration of Georgina’s work a secondary characterÊ can be fished up again to become, some where else, a protagonist like Liz that is a marginal character in “Visit to a small planet”, while she is absolute protagonist, because she is single, in “Party”. In the same way an idea between other ideas that are functional in a project, can end to spin in its track all projects, like that of night club in “The hungry Brain”. The work of Georgina is a growing fluid like life that if one tries to program it, it always finish up escaping from the aims.
Like the fulcrum of the work of Georgina which has the dynamic and incommensurable dimension of the consciousness, her expressions translate itself into a non-specialized form: installations, videos, Cd-rom, vinyl records, wall drawing, photographs, comics. Music is a constant element, sound tracks of videos and installations, followed by Georgina like a evocator mark to drive the atmospheres of the memory to the present.

In Bunny Lake is Missing (Otto Preminger, 1965) a distraught mother, desperately tries to piece together events surrounding the disappearance of her 4 year old daughter. The thriller develops into a kidnap mystery with a central character (Bunny Lake) that we never see and whom we never really know is real or imaginary. In the final scenes a drugged Bunny Lake is removed from the boot of her uncle’s sports car and carried slowly through an deserted house and into the brick-walled garden beyond. Watching in horror her mother sees her own brother preparing a grave for her child. Bunny Lake survives her ordeal and the film ends there. But what effects would these events have on the young girl in later life?
In Targets (Peter Bogdanovich, 1967), Bobby fills up the boot of his sports car with arsenal, goes home and kills his family in a straight forward and unemotional display of domestic violence. Leaving a note reading “To whom it may concern… I know they will get me, but there will be more killing before I die”, he then goes on a shooting spree in the city to the pop soundtrack on his radio. After a police car chase Bobby enters the empty lot of the Reseda Drive-In and waits in his car as the cinema slowly comes to life. After watching children play together on the drive-in playground he takes up his position inside the wooden movie screen. As the viewers settle down to watch the movie,The Terror (Roger Corman,1963) Bobby sets up his targets using a hole in the drive-in movie screen…
The recent piece The Bunny Lakes are Coming (shown at Anthony Reynolds Gallery, London) was the first episode of a new series of works which use video, music, painting, fashion and photography to chart an unfolding story introducing the elusive Bunny Lakes. In this episode, the gallery is sealed off by a false wall and brick printed curtain. Inside, behind a real brick wall, a video image cuts back and forth between a graffiti activist spraying a Bunny Lake logo, and the legs of a hanging girl swinging in time with the record she has just put onto her red plastic record player. The soundtrack is a heart-rending version of Tim Hardin’s Misty Roses, sung by the angelic voice of a 14 year old boy.
“Art is meant to be more senstive than popular culture but it doesn’t always manage it. The Bunny Lakes are Coming is a melange of pop cultural melancholy and terror that is as sensitive as a fresh bruise”. [Dave Beech, Art Monthly, October 2000]
For Pinksummer Starr has made the second episode in the Bunny Lakes saga. The Bunny Lake Collection is a performance based work which incorporates a new collection of dresses designed by Starr. Still drawing from the narratives of the two movies, the collection will be introduced for the first time to an audience at the opening of her exhibition…
“You look to me like Misty Roses, too soft to touch, but too lovely to leave alone”. [Misty Roses, Tim Hardin]