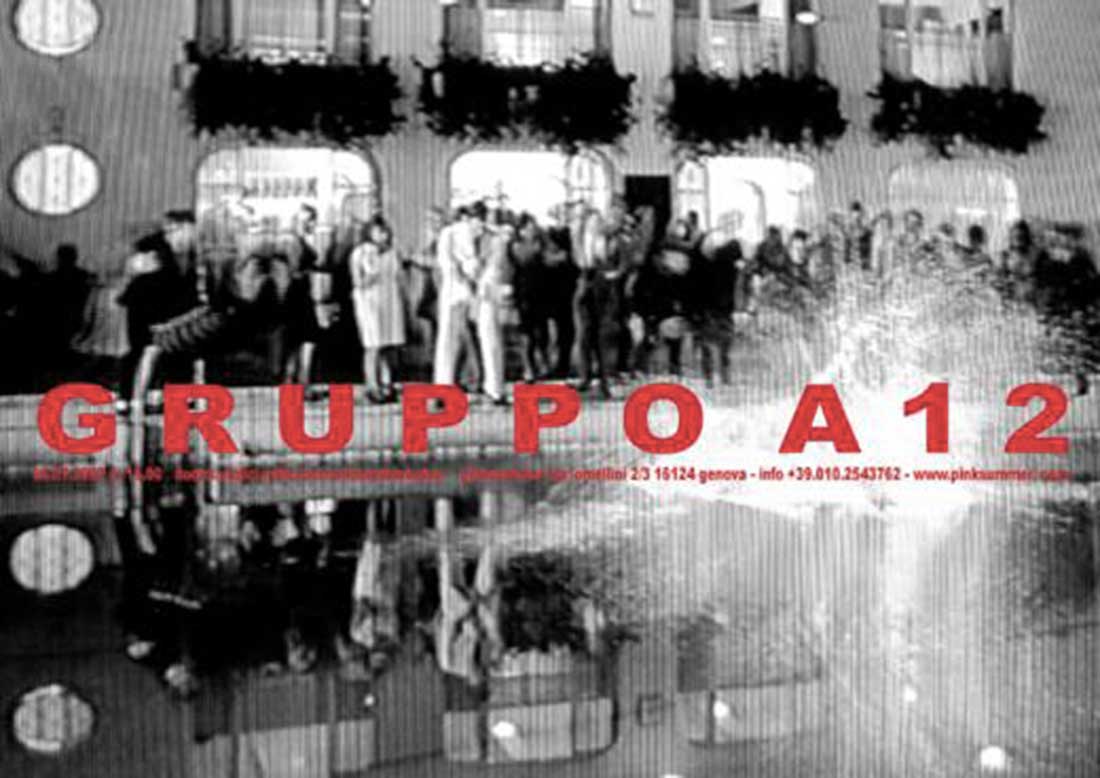 November 12, 1972 in Genoa there were 85 movies theatre active. A huge number compared with the 49 screens concentrated in 24 movies theatre today. The difference between those numbers means a deep change, not only in the ways of entertainment but especially in the urban tissue of the town. What’s happened to those spaces? What have they became? Some still exist others have been totally transformed, becoming supermarkets, banks, commercial centres, gym and so on.
The project “12.11.1972” starts from this disparity and those questions, constructing a narrative witch testimonies a change in the urban territory of Genoa as well as in the contemporary town. A kind of time machine, where the documentation of the present condition of those spaces, that were or still are cinemas, mix up with the stories that in those spaces during 12 november 1972 were set up and projected.
Interview with Gruppo A12:

Pinksummer: “Why did you choose such a name as the Genoa-Livorno highway?”

Gruppo A12: “Our group formed in 1993, we rent a huge room inside one of the ancient buildings in Via Giustiniani, very similar to this where your gallery is. For some time we were “those from the huge room”, such actually was. A12 Group is the random name given in 1995, (for an exhibition of Ettore Sottsas work at the Accademia Ligustica) to be better identified facing institutional interlocutors.
The meaning was double: At first we were twelve and A was the capital letter of the word Architecture. Moreover A12 goes to the East and we wanted to be a bit ironic with the “Voyage en Orient”, by Le Corbusier.”

P: When A12 Group formed in 1993 everything which was not private appeared much devitalized, the individualism reigned How did you chose to be a collective without a leader who would think in an eclectic, but systematic and phenomenological way of the evolving reflections about the social as a settlement, and sometimes despite of itself: the contemporary city?

G.A12: The individualism as well as the self-pleasure, at least as far as the Italian architecture is concerned, brought to a blind alley, out where we still hardly can go. Many of our teachers said theirs to be “Masters”, implying a vertical frame of transmission of knowledge, or even of the a genial mind. That was a blind alley since its beginning, both for the way of operating and for the contents of the research.
The group was probably created for some random reasons. At its ground was a group of people strongly linked among each other for a friendly relationship, too, as well as used to work together living some common experiences during the years in the University of Genoa, urged by the will of going beyond those narrow borders Few movements from University still protested, as some years before they almost vanished with “The Panther’s”, more in their collective nature than in the different ideas.
What we were looking for was a horizontal transmission in communicating ignoring the role of the author, allowing us to trace a heterogeneous and eclectic attitude regarding the city. Until then the university teaching appeared as a mob of contraposition and irreconcilable dogmas.
We thought to refer to the intellectual and aesthetical processes of architecture as to a tools’ box, each as useful as all others. In that period we often referred to the “bricoleur” theory by Claude Levi-Strauss. Working together seemed to be something natural, the ensemble may have well played for chance, we won some prizes of architecture and we charged with enthusiasm to go on.

P: As for the way of meaning architectural by the A12 Stalker Hans Ulrich Obrist spoke about a quite begun Italian miracle. Actually your work tends to free itself from any kind of intellectual utopia to recover a more functional dimension of architecture What do you mean when you tell the architect to be a technician for the transformation of the city?

G.A12: Since the early Sixties the Italian architecture gave its mean contribution through great theories for the city and its history. In the same period the Italian land was spoiled and the Italian architects work in very bad professional conditions.
The supposed cultured architects stopped their interventions as a possibility to change the city and the land, quickly substituted by some more unscrupulous but effective subjects Where the architects continued to be engaged in the processes of changing of the city and of the land, things go better.
In our works we always try to remember that we are drawing something which will be (hopefully) a part of the material reality daily lived by almost everybody. We try to develop our projects assuming this and disregarding any expressive fancy, at least starting it, (as for this, working together is really rewarding).

P: Foucault said that, within a culture at a given time, only one episteme exists defining the potentialities of every knowledge: both the one expressed through a theory, and that accomplished in a process. Is the hiding of the horizons brought by the disciplinary straightforwardness determining your work a kind of dialectic to recover the consciousness of our time?

P: Will you talk about the work you will present at Pinksummer?

G.A12: A kind of time machine. We propose a narrative tool likely to represent a process of changing of the urban land of Genoa. In this case the city is chosen as a quite common example to observe. It is Genoa but any other city could be examined, instead. It deals with a mapping all cinemas existing thirty years ago, pointing out what it is today of them. At the same time we want to express what is a movie show, become, too.
You criticized the theory of the inexistent places by Augé defining it nostalgic and a bit snobbish. Actually, we liked it, above all as far as the abuse is concern. The project “11.12.1972” is presented as a mapping even if a bit cynical or at least describing place, which were once quarter cinema in Genoa; many have been substituted with the multi screen, with banks, with supermarkets or with the nothing.

P: Does this project expresses nothing nostalgic, more than the statement, considering Genoa as your native place and the city where you live, maybe assuming its progressive loss of character and its displacement of entertainments?

G.A12: The nostalgic play might be too commonly genuese, as the town still lives in the memory of a generic past, sometime even unknown. We want to show a changing of the attitudes, of the shapes and of the structures of the town, which is global.
We choose Genoa as the Pinksummer gallery is there more than for a personal connotation. It is something critic, but open too: actually the multi screen offers a different kind of entertainment, under some aspects much more amusing and comfortable.
The cinema, too, determined with its outlet, a crisis of the theatre companies, and similar. Anyway, the cinemas closed because of the spreading out of television and video recorder in the Eighties, more than because of the outlet of the multi screen.
Moreover great economical processes are behind such changing of attitude, against which is not worth fighting and grounding theories on a rejection of the contemporary. We have to verify weather and how the centralization of functions within few decentralized container might spoil the character of some diffused qualities proper to the urban space.

P: Through the analysis we reach a synthesis, which are your conclusions in respect to the project started on a page of ’72 of newspaper Secolo XIX?

G.A12: We moved all around the urban land to observe just one kind of thing. Essai-cinemas, church cinemas or only of quarter, cinemas were everywhere. In all areas we had the confirm of a deep crisis of the town, hardly tobe restored.
Even where the changing and re-qualifying urban areas take place, a lack of imagination courage and a stereotyped idea of the art and turistic town identifies only with the historical center and few souvenir shops, on the contrary it is enough a sight-seeing by boat through the harbour to acquire the important industrial reality much more pregnant than each alley.
The corn containers on Ponte Parodi are destroyed and in downtown they rebuild unuseful palaces in ancient style (or such presumed) closing it from some daylight and open space.
The way of replacement of industrial or harbour activities is making a new huge consumers land, characterized by big commercial spaces (as the multi screen movie theatres). Going to the West from the Porto Antico, we reach the Commercial centre-Pontedecimo passing by some others (Fiumara-Campi). Genoa is falling down and down, the ribboned downtown and the abandoned quarters, even the most residential. The military strategy of the G8 (opposing the red zone to the waste area) expresses what kind of town is Genoa today.

P: For Pinksummer invitation you chose an image taken from the movie “I mostri” by Dino Risi with Ugo Tognazzi and Vittorio Gassman. Did You choose it just because it was on screen in Genua in December ’72 or for other reasons?

G.A12: Actually it was not on screen then it is a process of mere displacement, such as the episode about the “old mistress” thrown into the swimming pool we have chosen. We liked the auto-irony and the optimism that comes out of a movie like “I mostri”: it shows an ability and an interest to look at them self that in general it is quite absent in the italian cultural production today.

Gruppo A12 members are: