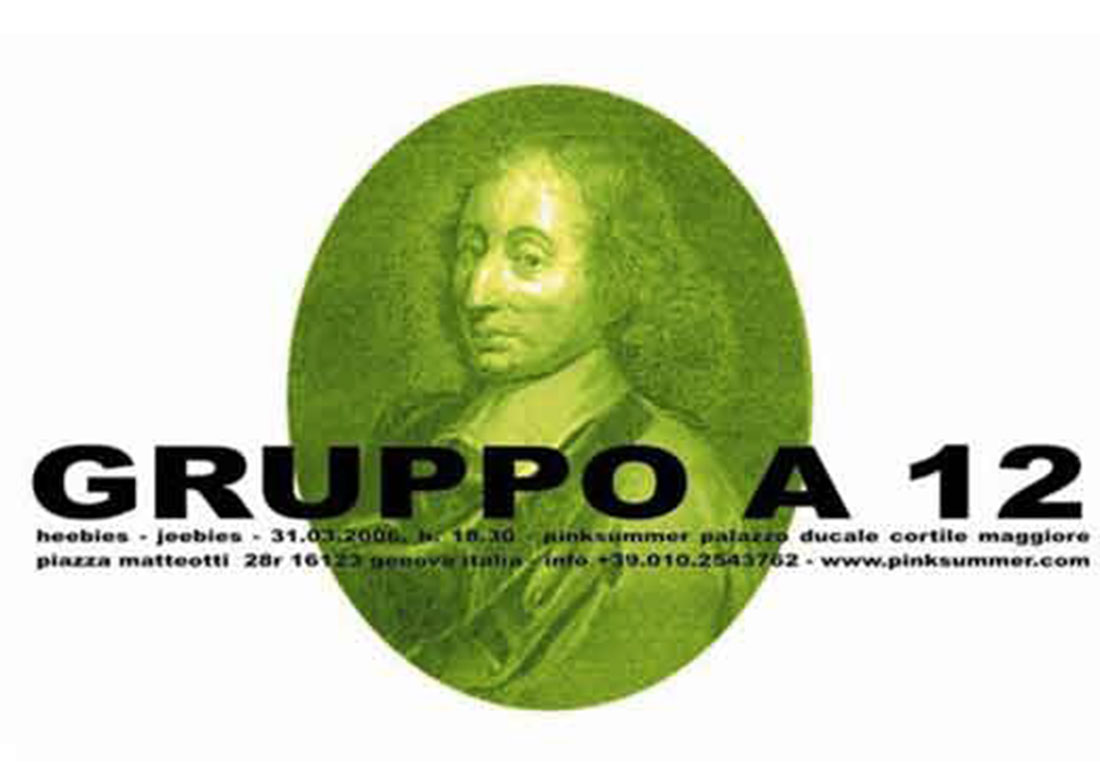 Pinksummer: We have always meant the artistic work of Gruppo A12 as complementary, in an analytical sense, to the one of architects. The image you have chosen for the invitation card of your second solo show at pinksummer, called Heebie Jeebies, is a portrait of the Jansenist philosopher and scientist Blaise Pascal. Pascal is the author of the “Essay on conics” and the “Essay on void” both aiming to prove the existence of void against its denial claimed by the Aristotelians. Pascal asserted that man, that he defined thinking straw, is lost in an infinite horizon symbolized by a circle which center is everywhere and circumference in no place. Please tell us why you have chosen Pascal’s portrait for the invitation and what is the meaning of the title “Heebie Jeebies”.

Gruppo A12: Let’s start from the title, that is strictly related to the topic on which the exhibition is based, the psychic disease (phobias in worst cases) originated by space: heebie-jeebies is an informal English term meaning anxiey, psychological disease (phobiae in the most serious cases) The term has a rather curious origin, being coined around 1923 by Billy De Beck the author of some cartoons very popular at that time, among which Barney Google in which such expression was used for the first time.
In 1926 Heebie jeebies became the title of a famous jazz piece, executed among the others by Louis Armstrong, later on the term became of common and official use. Therfore the title comes from popular culture and sounds funny, we liked to associate it to the austere and a bit uncanny portrait of Blaise Pascal, not really in reference to the content of its writings, but taking him as an illustrious case of serious spacephobia. It seems in fact that after a coach accident, Pascal was constantly harrassed by the terror of finding himself on the edge of a cliff and that therefore he used to have always a chair or other objects beside him as a form of protection. We do not know if there is any connection between the two things, but it is interesting that a person who spent part of his life in studying the void was obsessed by the idea of falling into it.

P: Anthony Vidler in “Warped Space” asserts that fear, anxiety and displacement, and their psychological counterparts, neurosis and phobiae, are connected to the aesthetic of space and in particular are endemic to the modern metropolis. In your opinion, does the idea of metropolis represent a form of cultural abstraction against the idea of nature as an ideal state?

G.A12: On the contrary, we think that the concept of nature in cultural terms is recurrent as the ideal place of escape and liberation from the constrictions of the organized life. Golden age, paradise on Earth, Arcadia, pantheism, etc. have accompanied the history of western culture in several ages and analogous ideas recur in different cultures too.
Even our image of culture, usually rather stereotyped and Nineteen-century related, as the history of landscape architecture teaches us, is the most artficially sophisiticated picture one can imagine. Living in nature we would probably last much less than in our hardly reassuring metropolis, so that some space related phobiae, maybe provoked by ” modern life stress” could take us back to ancestral memories legacies and a survival instinct. Nature, the actual one, kills!

P: The aesthetic of the space seems related to the social equilibriums of time. Renaissance central perspective in which all lines converged towards a single vanishing point is extremely reassuring, while the neurotic sensibility that distinguishes architecture from Baroque age until modernity, in which void is nothing, destabilizes. Do you think is it possible to read the psychology of time through an accurate analysis of architecture and city planning?

G.A12: The constructed space is a cultural product like others. As such, it contains information on the society that has generated it and it is liable to the most diverse analysis, interpretations and exegesis. To us it is essential not to forget that any analytical action is conditioned by both its object and the subject who performs it.

P: About the research of Gruppo A12, even just reflecting on 2002 solo show at pinksummer titled 12-11-1972, focused on the comparative social analysis inbetween present and past, starting from the logistic transformations and the destination of use of Genoese movie theaters active at that date, your work seems to present a subtle developement in a philosophical sense.
We are thinking at the maze, with all its symbolic implications, built on assignment for Kroller Muller garden, and also, a priori, at heebie-jeebies playful answer to space related contemporary neurosis. Is such autonomous development linked to the covered topics or is it a progressive detachment from the social-urbanistic imprinting of Stefano Boeri and more generally the Faculty of Architecture in Genoa?

G.A12: Any creative journey should necessarily evolve, otherwise it ends up in mannerism. 12-11-72 is part of a series of works on the transformations of urban space, mostly based on observation and interpretation actions that are more free and heterodox compared to the methods of our originary area of study.
As a matter of fact, in our recent projects such works have been replaced by others: in order to maintain the push of experimantation high, we should have made them the focus of our work, facing them with a research agency approach, while we were more interested in concentrating our energies on other forms of reflection and ways to intervene on the urban space and its transformations.
This does not necessarely mean a lack of interest for the specific topic that maybe will even return under different forms in future works. Actually, if we really want to speak about our specific background, other experiences were equally influential and other people too who provided us with a training firmly anchored to architectonic discipline in a traditional sense, which emerges mainly in the method by which we face every project. However, maybe just because we are a collective, we do not find always easy to see a linear evolution in our research.
No doubt there are some theoretical benchmarks from which our research develops, that perhaps, as years go by, has been finding its distinguishing feature in a progressive tendency towards a conceptual synthesis, by drying up itself more than rarifying, according to an economic principle (maximum result with the minimum employment of resources) in terms of communication. Our attitude is often rather pragmatic, for example in the case of Kroller Muller the symbolic theme of the maze was a given starting point, of which we offered an interpretation that is maybe one of the most purely architectonic of all our work.
In the case of heebie-jeebies the topic is coherent with one of the benchmarks we mentioned, which is the central position of the viewer in respect of the creation and transformation of the space. The topic of space disease or space illness finds its origin also in some reflections that we have shared many years ago on the architectonic language and the possibility to consider the space as element endowed of an independent meaning. For us, the interesting aspect of operating in what you defined a complementary context, in respect of architecture, is just the possibility to mix cards and face some themes with completely different tools, avoiding the obstacles that disciplinary certainties sometimes constitute.

P: What will you present at pinksummer?

G.A12: Heebie-jeebies is a work on space, investigated starting from its negation, meaning from those attitudes that are based on its refusal. What is interesting to us is its substantial ambiguity On one hand, everybody has experienced more or less some kind of disease related to his/her condition in space and percieved threfore the “power” of space factor, also in terms not necessarely negative, in respect of the possibility to achieve particularly effective architectonic effects, widely adopted by architecture of the past and the present time (not to undertake complex reasonings on contemporary spatial issues, it is enough to remind that space is one of the fundamental elements on which the concept of monumentality is based). On the other hand, it is hard to define clearly the limit of neurosis starting from the characteristics of space, moreover, from a clinical point of view, generally speaking, it seems that there is not any precise distinction between space related phobias and those concerning other situations or objects. The subjective element appears therefore prevailing in this case.
We have been trying to face these aspects without introducing the same ambiguity between space and subject in our work. Therefore we made up a series of objects, very different from each other, all working as “amulets” against space related phobias, by adopting mechanisms such as contrast, distraction, simpathy, understanding.
A “space-time track” in order not to lose the road and not to exceed the limit beyond which one should not go in overcrowded spaces; a “portable wall” in order not to fall into imaginary abysses; a “freedom Jacket” to face the anguish of scary distances in couple; a “grating corrector” in order to exorcise the vertigo of the void; a bracelet/rosary with “defense pendants ” to say in order to reduce to tameable icons various fears; a “multiple meter” in order to take back to familiar size any immeasurable distance; a “tracker” in order to enlight with the light of the reason complex obstacles, applied to our everyday spaces or some specific places, symbol of limited space conditions, all instruments of an exorcism completed “on” the space “through” the subjects who inhabit it.
The space has its own features, its specific autonomy, but it cannot be intepreted if not related to those who use it, who inhabit it, perceive it. Those relations are absolutely personal and often unfathomable. Like phobias, and the ways to remove them.