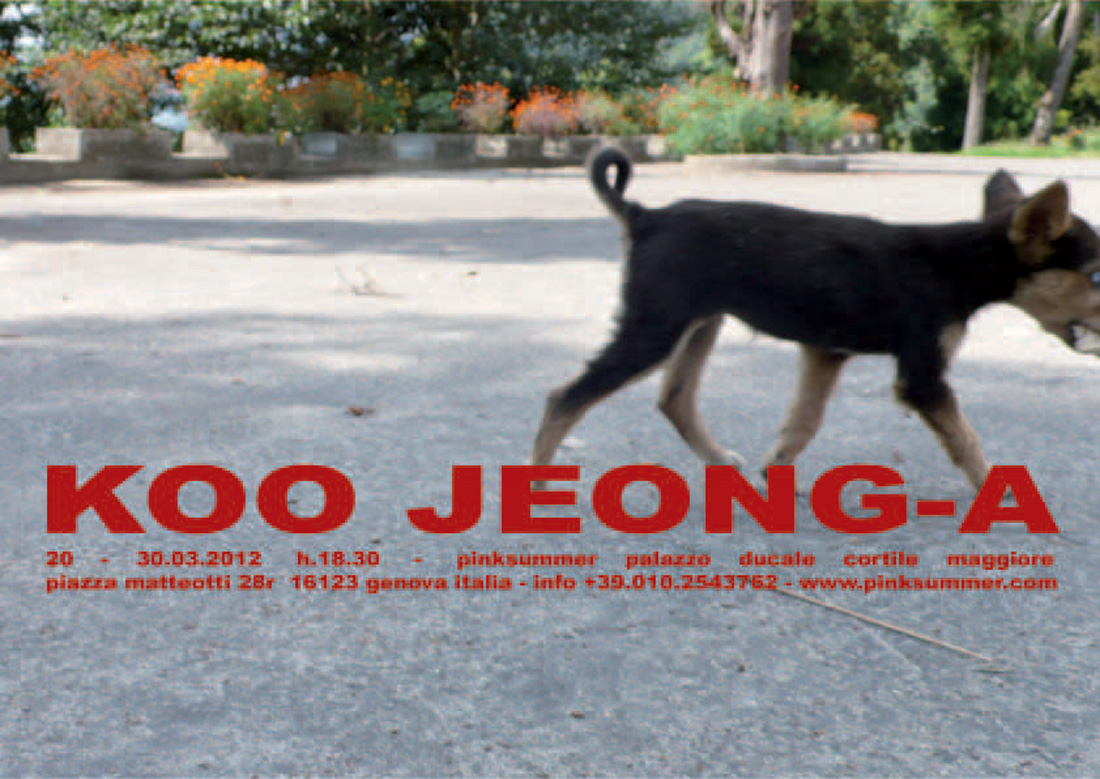 In 2008 Koo Jeong-a purposely made for of her first exhibition at pinksummer an edition of 100 kilograms of her “Dreams & Thoughts”, some sort of horizontal landscape with upward peaks, composed by chewing gum stripes of three different colors/flavors/smells.
We ordered from Perfetti Van Melle the 100 kilos of Brooklyn, “le gomme del ponte” and, while waiting for delivery, we arbitrarily picture our gallery as completely filled with chewing gum. As gum has actually an incredibly heavy specific weight, we were deeply disappointed when just a dozen of boxes were delivered and easy piled up in a corner of our office, waiting for Koo to arrive.
Three days before the opening, during the travel from Pisa, where Koo Jeong-a landed, to Genoa, we started panicking disguisedy as the artist, while talking of this and that as calm as she uses to be, said that a little time ago in Japan she had realized a 500 kilos edition of “Dreams & Thoughts”, which preparatory unpacking process took the effort of 10 Japanese workers (instinctively considered by us much more efficient than Italians), for 10 days.
Stripe gums come in a very accurate package: stored in a heavy but not as large as expected cardboard box, hundreds packets contain 5 chewing gum each. They are individually covered with an external paper, which color varies depending on the flavor, wrapped aronund the final aluminum wrapper with its paper lining inside.
With an urgency and a desperation that probably let us look like foolish to the everyday people, we called friends, relatives and some volunteering fine art academy students, to help us with unpacking. We recruited also some young folk who gave the impression of loitering outside the gallery, by deceptively offering them 50 Euro for any unpacked box, actually demanding approximately 5 hours of work made by three people. We took apart our desk in the office, composed from 4 small squared tables that we set up separately with 4 chairs each in the exhibition hall of the gallery.
There, for three days, 16 people turned over from 9 pm until 9 am without lunch break and the last day before the opening we were so late that at night we ended up ordering pizzas for everybody in the gallery. We observed that, at first, people tend to reveal their social attitude with various modalities, different for each individual, some by gently teasing us with ironic jokes on such an incongruous occupation, others simply by speaking.
Then, slowly but surely, all of them slip in the cocoon of their own silence, in the dreams & thoughts inspired by the gestural mantra demanded by their job. Also we had the feeling that the different ways the undone stripes were piled up by each of the people involved, would have told deeply about their individual personality. Koo used to arrive in the late afternoon, she got down on her knees and, sitting on herself, she kept on working until late night, alone in that weird demiurgic work.
We noticed later that no exhibit installation specialist, no matter how precise and experienced, was capable to reproduce Koo’s ascensional perfection. On the authenticity certificate, by the photograph, the instruction for the set up of “Dreams & Thoughts”, some sort of time vulnerable work, suggests to follow the image as a guideline, but it is also specified that any modification is allowed.
We understood that the title of the work, “Dreams & Thoughts”, came from the process rather than from its product and, to be honest, we did not have the feeling that effect (the product) coincided with the purpose.
The vanilla smell of “Dreams & Thoughts” fluttered in gallery for a long time after the work was dismantled. Going straight to the point, here the content seems to blow on the dynamic imagery of the work, shifting always elsewhere. The place where we are blown to by Koo Jeong-a, both in terms of space and time, is something that everyone is free to fill up with whatever he or she likes to.
Afterwards, we even thought beyond what at first seems to be just casualness that Koo might have led us through an honiric stimulating practice to be considered as founding condition for the existence of that work. In a text on Koo Jeong-a for the catalogue of her exhibition at Secession in Vienna, Cedric Price wrote:

*“For dreams to be transferred to others at different time is the key to treasure.
Koo’s work is always fresh – because timelessness knows no past.
Perception is active-mentally: observation, passive. (…)

To achieve delight while still discovering is a rare artistic process which separates this PROCESS from PRODUCT and in so doing makes the very separation, in time, richly rewarding without either the clarity of the product requiring resolution or such recognition, the agreement by others, as to the nature of such a product. (…)
KOO presents both package and the unpackaged, requiring equal recognition of themselves and the viewer.
Poetry in motion requires both the eye and the memory.

To invest Koo’s work with the 4th dimension & then she plays the JOKER – and a further dimension of wonder is played by the ARTIST !”*

The new solo show of Koo Jeong-a at pinksummer is titled “Venti”, Italian world for 20 (but in Italian “venti” means “winds” too). Considering that in the official press release of Georgina Starr’s exhibition “The Joyful Mysteries of Junior” we have been writing about chewing gums and tarots, here, for the second show of Koo Jeong-a at pinksummer, we immediately checked out to which arcane number twenty corresponds. We have found out that the number refers to the angel who indicates transmutation, medianity, protection, miraculous healing, and subtends a travel in the desert or a lonely pilgrimage.
Still unsatisfied, we have verified that according to the Quabballah the twentieth path of the tree of the life is a yellowish green arch with a shiny white color in the center, it has the scent of narcissus and the severity of the hermit, it is defined as the path of intelligence of will, because it is the outline of everything is equipped with shape and through this state of conscience the primordial wisdom can be known. About the twentieth path Alisteir Crowley wrote: “There was an indeed beautiful landscape similar to a deep forest during springtime”.
As it happened for her exhibition at pinksummer in 2008, Koo Jeong-a has chosen the image of a dog for the invitation card for the show, even though this time the dog is going out of the A4 sheet, trotting away cunningly with something hidden in his mouth. Let’s tell an anecdote. During the last edition of Artissima, Turin art fair, we showed Koo Jeong-a’s work called “State”. A little dog, who came across our stand with his distracted masters, tried to take away in his mouth the upper part of the work.
We had to force his mouth open to have the piece back, irremediably damaged though. It was a 10 rupees banknote, rolled up with the same perfection of gums collected into piles by the artist for “Dreams &Thoughts”, that we received protected like a treasure in a velvet lined little box. At night, when we told Koo Jeong-a about what happened with the dog, at first she answered that she would like to meet that dog, but in a second message we realized that she was worried and concerned about it.
It should not have been easy to make that tiny perfect cylinder out of a banknote. In “State” that was standing vertical and off centered on a shiny white squared surface, supported by 4 little bricks made of a translucent stone, that could be onyx, hidden to the senses, occulted like in an underground world.
The work seems to recall the complementarity of the symbol of the mountain (axis mundi?) and the cave as mentioned by René Guénon in “The King Of The World” or also the idea of the (mystic?) trasmutation implied by the journey from the darkness up to the crystal light of the mountain top. Not by chance the object of the transmutation in “State” is money. Koo Jeong-a told us then that “State” was some kind of suggestion referring to some areas of central Asia, in particular to the Kanchejunga, third highest mountain on earth, the most eastern among the 8000 meters mountains of Himalaya.
A sacred mountain according to five religions, which five peaks are called the treasures of the snow. In 1905 Alisteir Crowley himself was the first to try climbing this difficult mountain. An avalanche killed four members of the expedition and induced Crowley to give up both his intent to climb the Kanchejunga as well as his career of mystical mountain climber. About the exhibition “Venti”, Koo Jeong-a has told us that it explores 20 follets of transition humanity, inspired from Master Im Hak who had been practicing the Doon Gab/Chooz Zi from the beginning of 20th the century, leaving from the Khanchezunga mountain in Sikkim in India, and traveling through Hong Chean Stones until Bekdu mountain in Korea.
Doon Gab Sol is a technique that has been practiced since ancient times by the man who turns current figures into another form of being. Chook Zi Breab is an ancient technique practiced by the man who gives a rhythm to his pace. We have found out that mount Baekdu is the sacred mountain of Korean people, located in North Korea were their ancestral birth occurred and originated them. Koo Jeong-a is Korean.
Speaking about Im Hak Master, Koo has informed us that it is impossible to find something about that on Google or Wikipedia, because, like David Deutsch or Brian Green, he does not want to appear there. Regarding the doon gab sool/cheook zi beab of which Im Hak was master, it is something similar to the breath control, but Koo added that we will better understand by watching her photos at the opening of the show.
Koo Jeong-a project for pinksummer will consist of 20 double images (10+10 =20) and one or two sculptures.