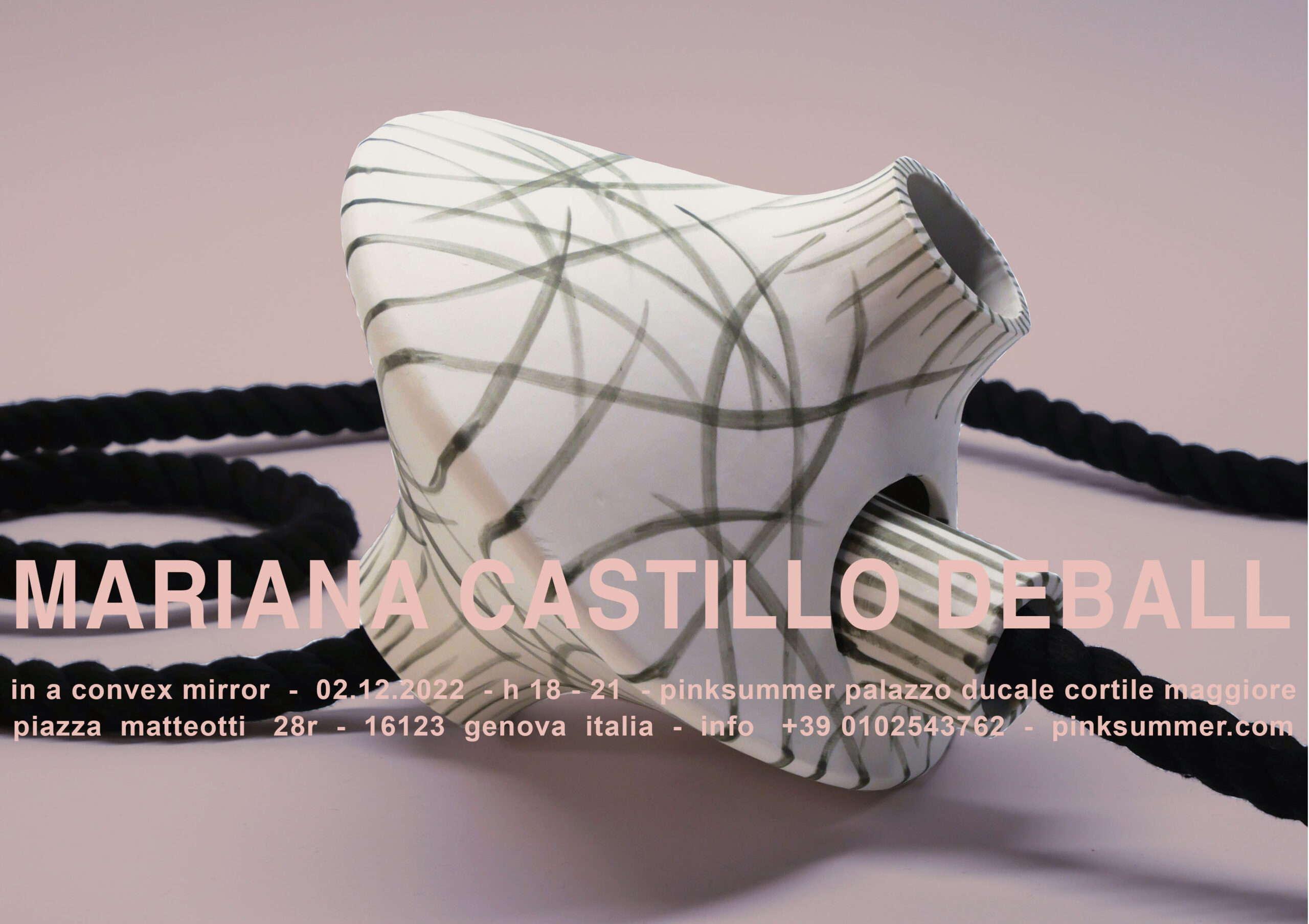 The whole is instable within

On a pedestal of vaccum, a ping-pong ball

Secure on its jet of water.

And just as there are no words for the surface, that is

No words to say what it really is, that it is not

Superficial but a visible core, then there is

No way out of the problem of pathos vs. experience.”

At the gallery will be present a series of engobed decorated distorted ceramics connected to each other in an aerial installation with a black cotton rope as to create a force field. The ceramics perhaps of Zuni ethnographic memory, are presented perforated, deprived of the receptive function of container and therefore of any use or exchange value. The perforated “kill hole” ceramics were used in burial rituals in the American Southwest, but they also hark back to a mathematical object, the Klein bottle, which Mariana Castillo Deball has worked on in the past, bringing it closer to the classic Mexican piñata. The “pentolaccia” in the catholic culture ends Carnival and precedes Lent and it has been used by conquering monks to evangelize Native Americans through the small gifts that the piñata poured on the ground. In fact, Klein’s bottle is a non-orientable surface in which the inside spills outward, projecting beyond the three Euclidean dimensions, into a fourth dimension that reality does not let us experience, but to which with reasoning, objectivity and imagination informed by a different narrative it is possible to aspire.
Inside the convex mirror of the exhibition, one will also be able to see roundels of three different diameters in the form of waxed scriptural tablets, referencing the large wall installation of waxed boards colored with black pigment in Mariana Castillo Deball’s exhibition titled Roman Rubbish currently running at the Bloomberg Space in London. In central London, or rather in the heart of the financial district, excavations a few years ago unearthed 400 Roman writing tablets, the wood of which did not decay because they were preserved by the mud of the Walbrook underground river that ran through the center of Londinium, founded by the Romans in 43 A.D. Mariana Castillo Deball says that from the debris, from the leftovers of a civilization, one can understand much more than from valuable objects. The Mithradeum tablets were not buried for any holy celebration but were simply discarded and now constitute the oldest written documents of ancient Britain. In fact, the Romans used the waxed wooden tablets inscribed with stilus, in a manner similar to our text messages: the moment they were delivered and read, the waxed tablets were thrown away.
“The series of black wax circular pieces” says Castillo Deball “are engraved with distorted images as if seen in a convex mirror.
The surface is black, and the engraving takes material out of the surface, making the image visible just from certain angles, depending on how the light reflects on the surface.
The images I engraved come from a series of XVI century etchings by Diego Valadés, a Franciscan friar whose work I discovered while working on the piece for the Mexican Pavillion at the Venice Biennale this year. The images depict characters speaking to each other, listening and writing, but what comes out of their mouth, ears and eyes are strange creatures such as serpents, scorpions and other insects.
These images depicted indigenous people spreading the word of forbidden religious practices by the catholic church. Diego Valadés illustrated his rethorica christiana with etching, thinking that the indigenous people were illiterate, and that the only way to communicate with them was through images.”