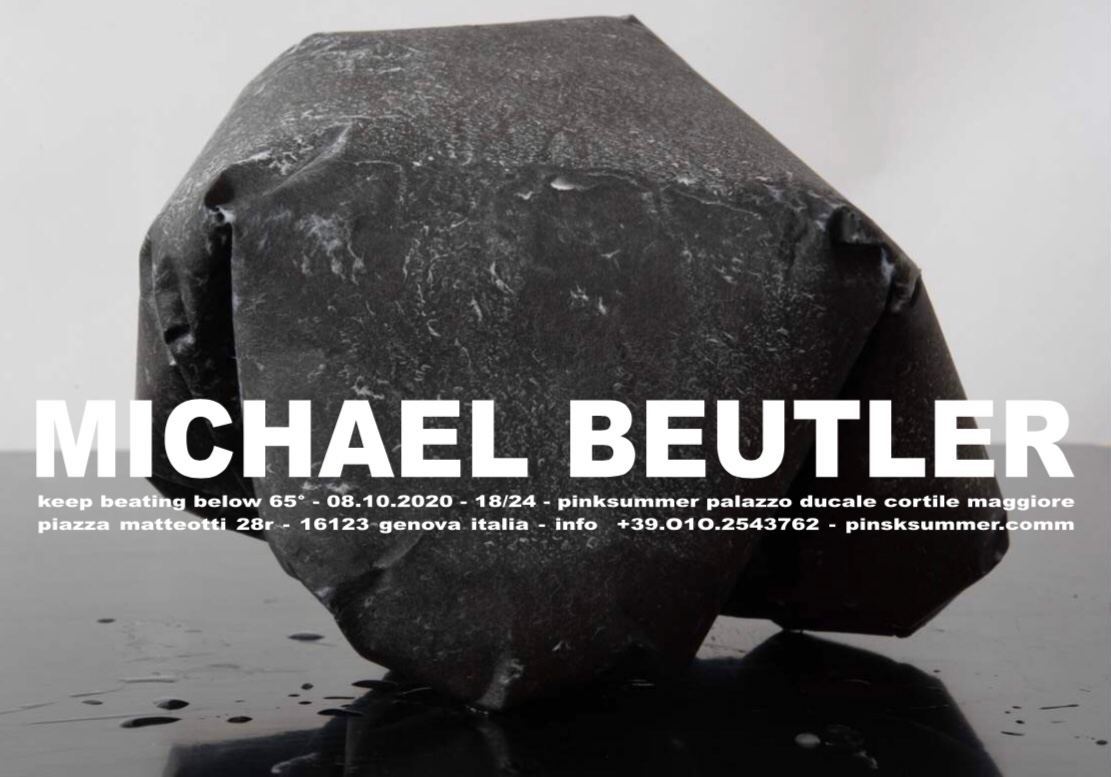 We decided to keep suspended the questions stimulated reading the emails by Michael Beutler. Michael Beutler will answer during the exhibition if he wants to.

Michael Beutler: the summer is very very hot. I am melting away in my studio.
I haven’t decided on the topic for the show yet, but I would very much like to make one big installation. So not a show of fragments like last time, but an installation that does deal in an architectural kind of way. I very much fancy big volumes these days and work on a way of making my own kind of Styrofoam, but made of paper balls. It is a bit related to a work that I am planning for a solo show in Ludwigshafen at the Wilhelm Hack museum. Ludwigshafen is the city of BASF. amongst many plastics the maker of Styrofoam.
I imagine one big volume that is a bit like an artificial rock that is then eventually cut into smaller sections, to build architectural shapes.
The only problem and of course also the nice part about them is their giant volume…. which might be problematic for transport, your small door and also storage. I will also search for alternative, less heavy volume solution for a big installation at your place. But I would very much like to do one big work in there.
I will build a little model of the space and the installation and some samples of the material, so we have more in hands to talk about.

(Pinksummer: Your work tends to encourage the production of meanings in the visitor, rather than the consumption of closed meanings. If you weren’t the author, what meaning would you produce in front of a “monolithic” exhibition, more than a “fragmented” one of the same authors, that is to say compared to a unity of style and thematic coherence?)

M.B.: It is one of the baselines in so many of my works, that is the idea to think of the gallery as a container that was built to suit a certain object, rather than thinking of the gallery being there first and the artwork later. The VASA Museum is probably a very good example for that kind of architecture.
By doing this the remaining social space changes to a high degree. The artwork is in control of the movement of people.  these find themselves in a special situation, they need to deal with it together, communicate….
Another part of this strategy is to give no option to overview the entire work, the visitors have to move around to observe, need to remember and need to puzzle the object together in their head.
I always liked your gallery space for having this nice vaulted ceiling. I would very much like to play with it and I think this could be a good way to do so.
Let’s see…
Imagine the Portikus exhibition (Portikus castle) inside the gallery. Or a big rock of stuff standing on just a tiny bit leaving only little space to walk around the gallery.
I will have a look about what I can do about the fitting in transport etc… The entire Venice exhibition also fitted exactly into one truck only
So fingers crossed it works this time.

(Ps: The main question that people ask themselves in front of a ship in a bottle is how one could put such a big creation inside such a tiny little space. Under a technical profile, that you are always aware of, ships in bottles can be built in two ways:

However, the most ancient ship in a bottle dates back to 1780. At the beginning sailors, lighthouse keepers, prisoners used to build it. It was bargaining chip in dive bars and brothels. The most ancient objects kept in bottle were mostly prayers, crosses, that seafarers used to bring with them to anchor themselves to some kind of certainty in the form of an amulet. The bottle was a simple container to protect the lucky charm from the salt and the dampness. Ships in bottles sometimes resembled ex voto: objects donated to a deity following a commitment that the claimant took on so that a wish could be granted. The ex voto is a thanking as if it was a tactile manifestation of a prayer. But ex votos like ships in bottles are small objects to look at from the outside, here you take us inside the bottle where the object is ungraspable and it requires memory, logic and maybe imagination to be perceived. Is your bounding artificial rock a metaphor or a falsehood, to quote the Harald Weinrich’s essay? And to quote Baudrillard when the prison stops existing can kidnapping and reclusion happen in any space/time?).

M.B.: I scrambled some thoughts and notes together from within my studio. I distilled a title out of it which is the following:
Keep beating below 65°
It is a misread quote from an Oat milk barista bottle which foamed content I enjoyed together in my coffee this morning.
It is the manual on the package that tells you how to foam your milk the best. My works tend to have manuals, since I am not the only one producing them. Even though I have an ambiguous relationship with manuals. I do not like recipes much. I rather experiment myself and work with what is there, open my senses to the material around. Non the less I also tend to look at the internet to find some information about how things are done. Doing this I always have the feeling I am wasting my time. Since I started my practice about 20 years ago, the means of gathering knowledge have changed a lot. Back then I really would have to figure out how to bend a meshed fence myself. Today I could open a webpage and would always find someone who has done it already and made a movie of it. But what does it really help? I am still here with the materials in my hand I am just not wanting to make what I am seeing out there, and I don’t want to repeat a process knowing that I would miss all the wonders of discovery. None of these manuals would help making the art, not even Sol LeWitt.
With my coffee in my hand I passed by a little heap of books in the corridor containing our library. I see a little booklet that I achieved in Kanjiro Kawai’s pottery workshop in Kyoto during our Goethe Institut residency in 2018. It says on the cover: “We do not work alone”, so true I think and suddenly seem to know why I am struggling to bring my stuff together. I made a whole range of experiments and not one of them really has worked out. I do these experiments to be able to pass on jobs to my helpers. To rationalize a flimsy technology, to be able to turn it into repeatable procedure. The reproduction would create believe and establish a system beyond the appearance of just one of the objects.
I am doing these experiments thinking of how the production in the gallery would probably look alike. I am always aiming for a situation, where all the materials are there, all the tools are set up and all of them are tend to by busy curious people, enjoying whatever flies off their hands and contraptions.
Yes – “We do not work alone”, I certainly don´t, but how is that in these times? I like doing these experiments and I actually do have to make them alone to really have my senses at work. But I will rely on others, when the production really starts.
Covid19 is still around and will only be delt with when all are working together. The internet has helped to spread information and to keep people busy in their lonely homes, but it also keeps spreading wrong information and a lot verschwörungstheorien. The internet provided a way to talk to my students, but meeting them after some month in person really made us very happy.
So I guess Keep beating below 65°, because we don´t want the beautiful foam to collapse. Energetic but careful beating I would say.
I so very much want to set up this tiny workshop in the gallery, that with just three or four people will make some nice foamy shapes, that will slowly grow together, to shape some big structure, which conquers the space, separates us from each other again, but which hopefully also will display the joy of its togetherly making.

(Ps: Why did you use culinary metaphors to describe the project of the exhibition? You scramble your thoughts as they were eggs, you talk about manuals as if they were recipe books. It is not a that you title the exhibition reinterpreting the instructions to properly beat the milk on an oat milk’s packaging. Keep beating below 65° seems like a will:
Regarding foam Roland Barthes wrote in Mythologies: As for foam, it is well known that it signifies luxury. To begin with, it appears to lack any usefulness; then, its abundant, easy, almost infinite proliferation allows one to suppose there is in the substance from which it issues a vigorous germ, a healthy and powerful essence, a great wealth of active elements in a small original volume. Finally, it gratifies in the consumer a tendency to imagine matter as something airy, with which contact is effected in a mode both light and vertical, which is sought after like that of happiness […] Foam can even be the sign of a certain spirituality, inasmuch as the spirit has the reputation of being able to make something out of nothing, a large surface of effects out of a small volume of causes

Ps: On the subject of Roland Barthes and The Death of the Author and also of Foucault and Suzanne Prinz’s incipit in you latest monography Things in Slices, what is your relationship with authorship and with the ideas of avant-garde and of “masterpiece”? What’s more important: the author, the artwork, its reproduction or the visitor?

Ps: Talking about recycling, how can one distinguish between a sustainable or unsustainable artwork?).