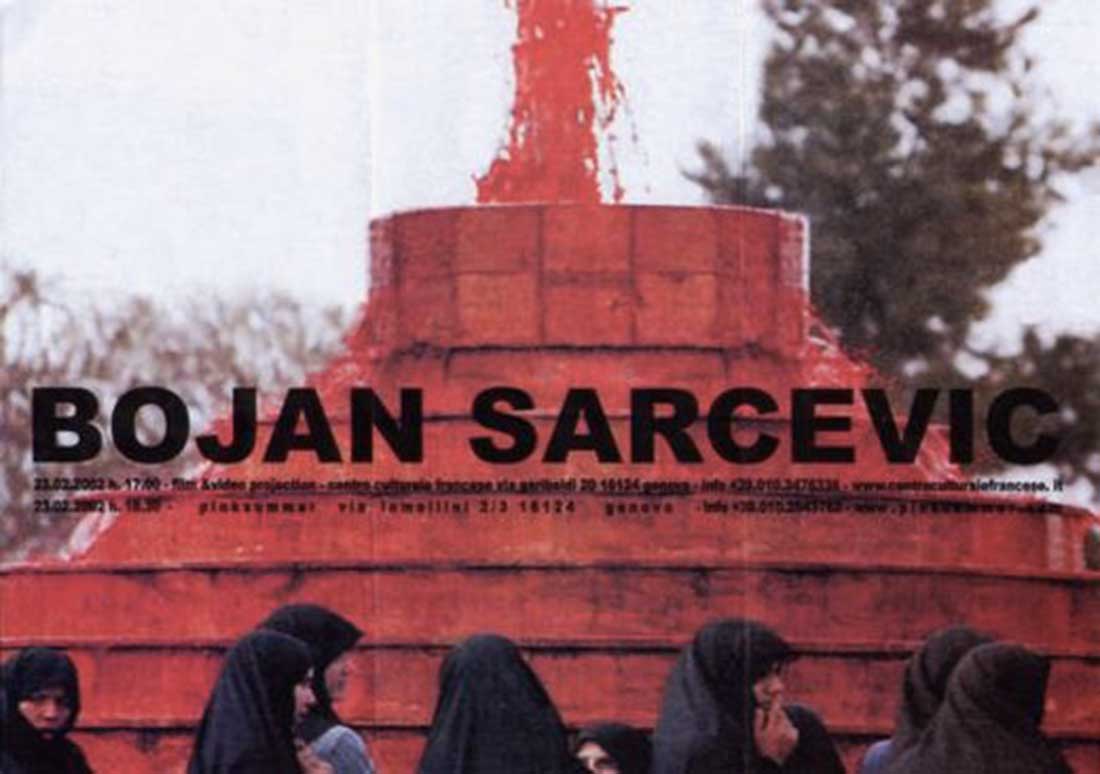 Pinksummer: “Even if, at first sight, it looks like, your work is never off-line,I mean it doesn’t shape abstract situations, but it underlines the situation element (the place, for example) and thus the existential one. Do you think existence is a structure for a situation conditioning?”

Bojan Sarcevic: “It’s obvious that existence is connected to the condition of a specific situation. But what is far from being obvious, it is the nature of this connection.I don’t think existence is a structure; it rather needs an appropriate structure to appear and disclose its originality. One existence doesn’t exist but in a definite field. It’s inscribed somewhere, in a place, in a moment, in a relationship. A situation or a place never creates something of itself. Birth originates From the encounter of pre-existent structures: on one side there is my glance and its story, and on the opposite, there’s a place, that as well has a story. What occurs in the meeting of these two elements, is the equivalence which results from what it can not be determined in advance by a calculation. The alchemy takes out something incredible, something impredictable and still necessary.”

P: Let’s think about your video of the dogs in a Dutch church: It seems that an Animal is in the “World as Water in the Water” (1999). Do you think existence is different from mere presence?

B.S:I understand why you’re asking me if the existence comes to be a mere presence with in relation to this specific work. Actually the animal’s way of being (the dog in this case) can look like a materialisation of the plain presence and of immediadiacy, what really is. A dog has no respect for places that are sacred in our mind. He barks where we use to observe a respectful silence. But I don’t envy at all the dogs blind freedom and I think it’s naive to consider a model, his way of being. The dog presence in the church doesn’t express a rebellion or blasphemous intention, but it allows me to set a critical distance in a relationship that naturally is submission and respect. At least, everything, just like the dog, has no relation with the church, as any connection requires a minimum distance. In similar way we can’t properly talk of a relation with this place, as the relation is performed both for believers and for tourists. Presence, to a man, is immediately full of sense. Somehow there is not immediate presence but always mediation, much more for those places, like a church, abounding in signs and representations. Paradoxically, you need an enormous work to do in order to find an authentic immediate relation. You must understand a sign is a sign, a building is a building, and value is not inside the stone but in the spirit that is free like a dog, since silence in this place is the most suitable for concentration.

P: The idea of trace reoccurs in your work; it could be an extraneous architectonic shape that mixes up with pre-existent (Untitled 1998,99,00,01,02), a fluid flowing mysteriously from a worker’s boots (Irrigation-Fertilization 1999), or, again, dirt on working clothes (Worker’s Favorite Clothes Worn While S/He Worked 1999-2000). Is Trace an emanation of “being-in-the-world”?

B.S:Trace is an emanation? Yes, it is. But if we stop at this point, we Make a reduction. I think there are two types of trace: first of all there’s a trace that is a gesture, voluntary and nearly vindictive displays. It’s a trace that we can brandish as if it were a sign, to declare our presence in this world. Through it, we mark the place around us. After that, there is the undergone trace, it marks and determines us, maybe in spite of us. But the two types of trace share signs. We need to see, read, describe and, shortly, recognise them as manifestation and emanation of being. It’s only at this precise moment that this being really becomes “being-in-the-world”. I don’t think it’s enough having being’s will to show, he will need an external echo, even if, it can’t be perceived.

P: In “Frieze”, Jorg Heiser assimilates the water flowing out of the worker’s shoes in “Irrigation-Fertilisation” to Pollock’s dripping. The anti-formal controversy, raised in a moment of particular historical unstableness, tends to set up more problematical aspects of reality against form that means a steady, lasting and thus positive sense. Actually war, hate and destruction are boundary-situations reabsorbing the existence sea in a haven of absolute: time, irrevocability of the past, death. How do you conceive existence with reference to transcendence?

B.S: For me the gesture, the action, are the moments of the embodiment of the transcendence. Existence reveals its fullness when the transcendent looses all its Transcendence to become perfectly immanent. The absolute is in a sense present in the spontaneous. When one looks for the shape, one is in the analysis, in the distance of the critical glance. When the shape is imperative to itself in equivalence with the background, then the absolute demonstrates itself. There are too rare points of light. But I shall not do the apology of the naive spontaneity, which believes that it is enough being spontaneous to be. The spontaneity always comes for me, as the outcome of something. As for the second aspect of your question, I do not believe that one necessarily has to look for a link of necessity between historical and political events in a society and the new aesthetic creations.

P: For the invitation card we asked you to choose a picture from art history close to your work concept. You chose a public monument in Teheran, built for fallen soldiers in the Iran/Iraq war; it’s a strongly socially/politically characterized object and, at the same time, so far from the antiseptic context of contemporary art (exhibitions in museum and galleries) where you are use to working. Why did you choose that picture and how do you relate to it?

B.S:That picture was drawn from a newspaper. Paradoxically I was struck by its visual power more than its social/political value. I appreciate the rough and simple design: a pyramid of bricks and red water instead of blood, whose purpose is to commemorate sacrifice and death. It’s an extreme and beautiful idea. It’s a public monument, a fountain… of blood (unthinkable in Europe). The power, which has the death generally, enlightens the sense of the sacrifice, at the bottom the sacrifice restores the lost value, by means of the desolation of the life. It is indeed a weakness of the western world to give to the death a character of irreality. I think that the art, or the death, have the task to reveal the life in its plenitude.

P: What will you present at pinksummer?

B.S: It’s an exhibition conceived from leftovers. It will include photo, drawing and sculpture. Instead of conceiving some specific project for the exhibition, I wanted to show snapshot images, objects or things that I guard in my pads without ever having thought of considering them as objects of art. These rests exist only as results of process, they are tardive and never original. They determine what, in my work, does not belong to the part taken in “consideration”. I would on the contrary like to show that the leftovers appear from a non-coincidence between the essence and the existence, that it is the existence itself, which introduces these irreducible. The existence, which is to say this tiny and extraordinary fringe at the same moment which distinguishes a possible and a reality. The rests, that is to say what makes that a thing is still the other thing than all that one can say and understand.

B.S:No doubt I would write the same thing as what I answered to your questions.