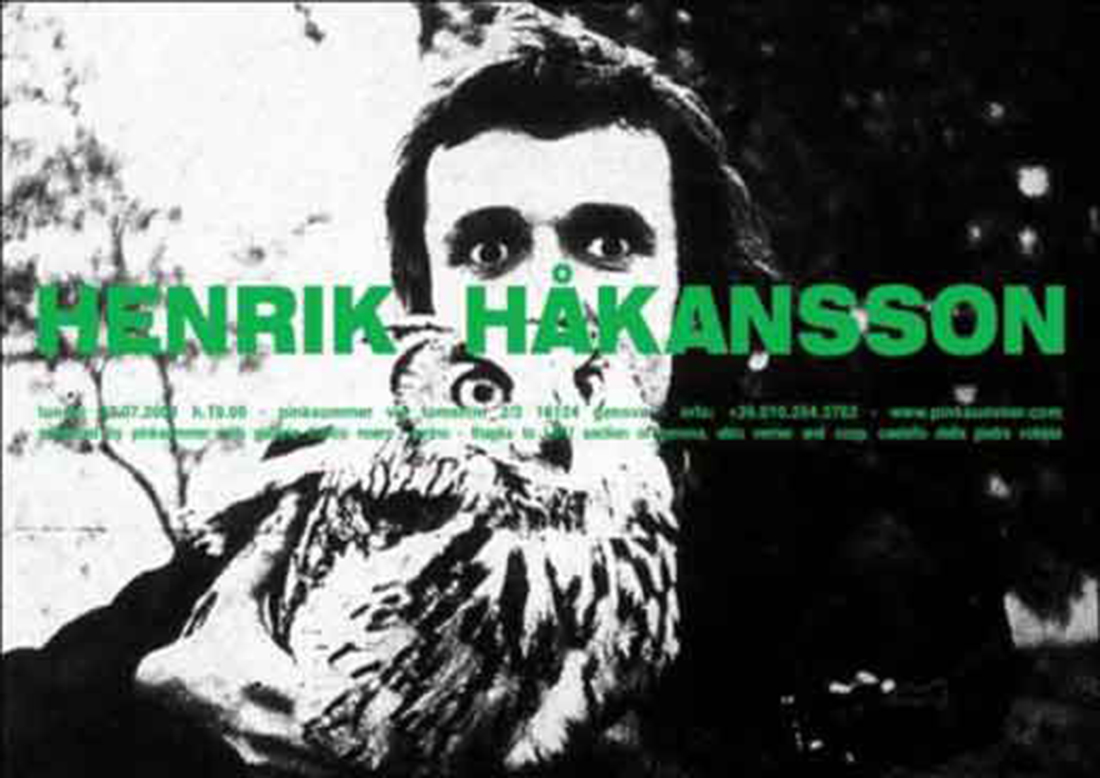 Pinksummer: “What we call nature is just our idea about the natural environnement that surrounds us. In fact, although the world was always the same, the ideas about it changed reflecting different historical moments and their knowledge in terms of science and ethic. What’s your (our) current idea of nature?”

Henrik Håkansson: “Today Monday it is rain and maybe further? the nature? a suggestion as the overall environment that surrounds and involves the space where we are a part of life in general. And then it is a part of space that we lose at a rate about 10 or more football fields a second.”

P: More on the first question: do you think that every idea of nature could represent the Zeitgeist of the historical period and the place where it was developed?

H.H: Not sure about your question, but yes.

P: During an interview with Daniel Birnbaum you said “I’m the very starting point. Everything is seen from my perspective, and the very point of Departure is that I want to see”. What do you want to see in what you watch?

H.H: I believe I’m trying to get experienced.

P: Your work has been chosen by Okwui Enwezor for “Mirror’s Edge” an Exhibition based on the idea of contemporary confusion between reality and Fiction; you was also in “The Greenhouse Effects” curated by Ralph Rugoff and Lisa Currin last year at the Serpentine Gallery in London, in which 16 contemporary artist (among them Olafur Eliasson, Tom Friedman, Yutaka Sone) worked on the idea of Joseph Beuys that thought artist as healer who could unite the opposing world of nature and culture. What do you think about these different interpretations of your work?

H.H: I don’t know really but I like the ideas

P: What do you think about the concept of garden?

P: You told regarding yourself to be “an enthusiastic amateur”, it probably means that your approach to nature is romantic. What is the difference for you between science and art approch of nature: both don’t start from fascination?

P: To create your ecosystem populated by plants and insects and to investigate Animal life you use sophisticated technology. Science offers a new way to Approach nature? Man is able, in the end, to build a real-fiction jungle in The ceiling of a room “After forever (ever all)” without the help of painting, photograph or sculpture?

P: Have you seen the animation movie “The bugs life”?

H.H: I believe so but there was also something called the Ants and I don’t remember which one, but it was sad.

P: What will be the project you will present in Pinksummer?

H.H: I’ll make two soundtracks from working with the sound of two different birds, the Thrush Nightingale (Luscinia luscinia) and the common Nightingale (Luscinia megarhynchos) both commonly just called The Nightingale, as in Italian Usignolo. One is recorded live in Sweden, and the other in Genoua. The sound will be used to produce a record with two sides of love songs, the two songs to be played together. The record will be the second release of a free sound record that is produced to be free records of different aspects on variable communication and atmospheres.

special thanks to: L.I.P.U, section of genoa, and Cooperativa Castello della Pietra (Vobbia)