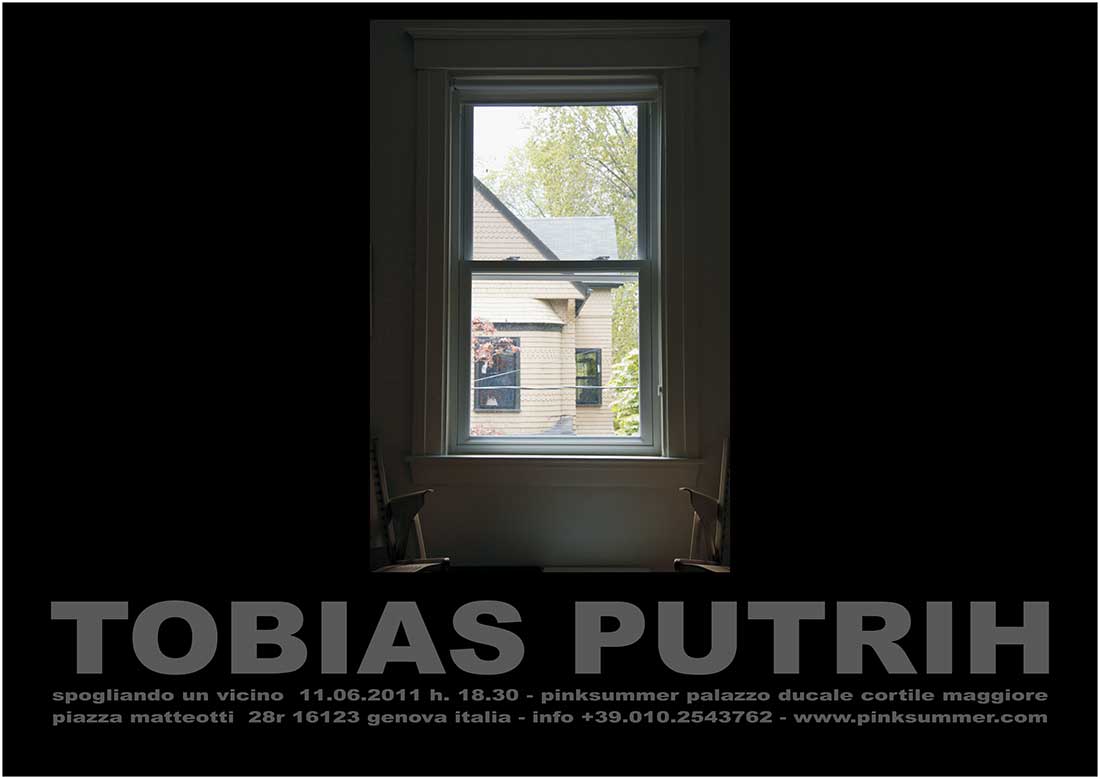 Pinksummer: Let’s start this conversation “on the wrong foot,” speaking of beauty. Once, about your works, you affirmed: “when I would like to cry out “how beautiful!”, I think I started off on the wrong foot. I feel I have to start all over again (Oh did I say “beautiful” I think I started off on the wrong foot. Let me begin again).
It’s hard to think of beauty as a merely incidental attribute of your work, as your works are objectively beautiful, and we are not able to read such celebration of beauty differently than as a sign of intentionality. It ‘s also true that cognitive neuroscience tends to sweep off the self and perhaps the soul from the horizon of a brain understood as matter that tends to decide through deterministic algorithms, like saying that we do not do what we want, but we want what we do, and in this sense we could extemp you from the responsability of intentional beauty. What do you think about it?

Tobias Putrih: Yes, it sounds like a bad excuse. I’m afraid i’m still very much responsible for my own decisions. I just have hard time relating to “objective beauty” . What interests me is mostly response mechanisms of a viewer – viewer relationship with an object or an image and object’s almost magical ability to gain power over individual.
From Marx’s commodity fetishism to Fraser’s sympathetic magic and Benjamin’s work on mimesis modernity tried to understand, regulate and in a sense harvest the power of objects and images. In that sense “objective beauty” is considered a lure, a spectacle, a mechanism of entrapment that is always introduced with specific half obscured agenda. From basic biological standpoint when for example talking about animal mating this agenda can be called reproduction. You can also call it corporate marketing strategy when you are unwrapping your brand new ipad. Such beauty is secondary category and straightforward recognition of it is always problematic. I mean, I can confess the work is “beautiful”, but you can also call it strategic beauty and besides that you’ll never know if I’m misleading you or not.

P: Again, speaking of formal attributes, the hermeneuts have often spoken of ambiguity in relationship to, we believe, your use of simple materials such as cardboard, polystyrene, plywood, organized in highly complex forms that remind the organic becoming of parametric design.
In a candid way you once said that the physical component of your work has an exquisitely situationist base; considering that in Slovenia the art market is not very developed, to work with low cost materials has allowed you to contain the initial investment in your work, thus reassuring you. Regarding its complexity, it could perhaps depend on your aporetic relationship with the object. It seems in fact that you want to create “the fatalistic illusion” that the matter itself contains inside the possibility to produce forms. Tell us, in this sense, about your collaboration with Mos.

T.P: Well, yes, matter and form are quite closely related in a sense that some forms come to specific material more naturally then others. Decision to make an object is to the certain extent always based on economics. Specially with sculpture one has to think about weight, size, storage because each of these comes with a price. Object are always about limits – how heavy and wide is the object to fit my studio door, who’s going to store it, what is the difference between remaking the object vs. storing it, how long material will last etc.
For example – in a zero gravity space idea of sculpture wouldn’t really make a sense. Weight is one of the key attributes that sculpture shares with architecture. Question about weight and balance was also starting point of my collaboration with MOS architects. What interested us is fine border between stability and collapse. How do we put things together and how long do they stay there.
The project was referencing Brutalist car park built by Owen Luder in Gateshead not far from the museum that was being demolished at the time of our show. It just seemed such a waste of material to build a huge concrete building that will last only 40 years. But that’s the story about architecture – it’s about how long structures stay inhabited, how long someone takes care of them and keeps them alive and healthy.

P: Regarding your “modernist anachronism”, the resistance to the final form, the attraction for the idea of the model compared to the final architecture of the building, and also the tension for entropy, collapse, failure, general loss contained in your work – specifically we are thinking of projects like Overhang in collaboration with Mos presented at Baltic, but also of Quasi-Random (Study on Buckminster Fuller’s Cloud Nine Project). It has been affirmed that you have been influenced in this sense by the collapse of socialist utopia, projecting it on the liberal utopia embodied by the modernism accelerated by the economy post ’29. Are all great ideas doomed to fail when they collide with reality?

T.P: I just think that ideas should be viewed from more dynamic perspective. In that sense I very much believe in a Tatlin’s viewpoint – that we first have to design impossible and then think about implications. And Tatlin’s work is one of the most entropic works possible – it’s about failure and impossibility but it’s also systematic and constructive.
It’s about putting things together that should be improved and should work in a future. So failure of the experiment is always a lesson. Even today if you look at the Russian space program in a Star City near Moscow – if at any point during the history of a space program an astronaut made a mistake this mistake was analyzed, named after that person and thought to the future astronauts. It’s negative, entropic history that anyway deals with systematic improvement of knowledge.

P: “Spogliando un vicino” (stripping a neighbor) is the title of the project that you will present at pinksummer. Who is the neighbor in an absolute sense? Tell us about this project.

T.P: We moved in an apartment in Cambridge, Massachusetts and our living room window looks at the wooden house covered with shingles. The shingles form simple patterns and curves. There is some almost naïve playfulness in simplicity and make-shift character of this wooden house. And obviously the builder wanted to add something more – he wanted to design a skin, to protect the inside but to make the house anyway appealing.
Already in the beginning I realized it’s quite strange to look, to study neighbor’s house because no matter what’s my excuse I can’t deny I am looking through the camera observing my neighbor without his knowledge. Well, I’m decoding a shingle pattern, trying to solve the mystery written on its skin. I’m just analyzing, trying to understand, am I?
I practice it means I’m making a model, making shingles as a substitute, attaching them and de-attaching, playing and testing. Inside the gallery this game takes another turn – I bring the object to the gallery, I strip it and put the pieces on the wall and arrange them in a pattern with an idea to create a fluid exchange, some sort of relationship between object and it’s parts.