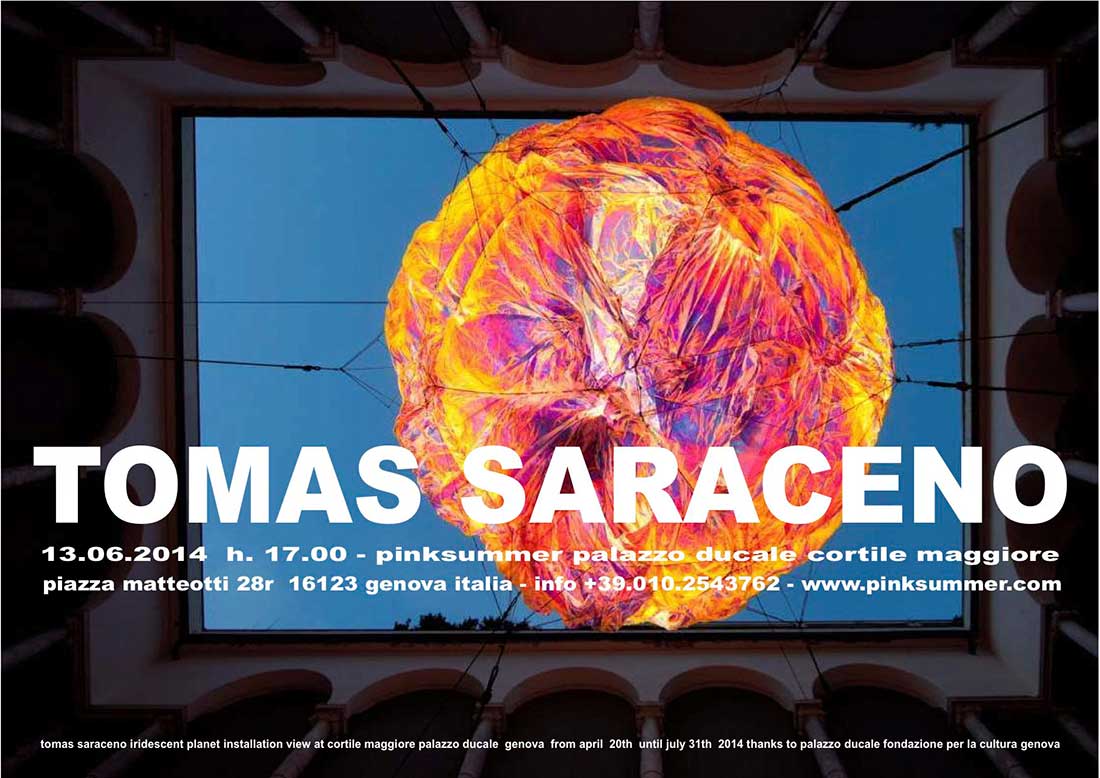 Of course, we do not mean that the upcoming Saraceno’s exhibition at pinksummer will not be a beautiful one. That will be sort of a wonderland indeed.
In Cortile Maggiore, the courtyard facing the gallery, there will be the large Iridescent Planet, produced by Palazzo Ducale, Fondazione per la cultura on the occasion of La storia in piazza festival. Beside subsuming its title, our exhibition is connected to that work by an harp of rainbow light acting like a bridge. Inside the gallery there will be a brand new video work and a circular kite, dressed up by Iris too, that could actually fly and interact with the wind as a shamanic instrument, able to dinamize energies by easily understanding their direction and assimilating their rhythm.
This time though, we are not going to go on about Pinksummer exhibition as a very special project that was never presented before is going to happen at Villa Croce: Cosmic Jive: Tomas Saraceno Spider Session, an exhibition curated by Ilaria Bonacossa and Luca Cerizza, accompanied by an equally special book edited by Joseph Grima and published by Asinello Press, Genoa.
In case someone wanted a hint about it, something useful to more comfortably experience the exhibition at Villa Croce, we would definitely suggest to watch the short film Prova d’Orchestra, directed by Federico Fellini in 1979, possibly projected, to imitate Strehler, inside the personal tv viewer evasive placenta of a darkened room, and try to answer the Fellinian question asked by the harpist, as the one who plays harp knows that other dimensions exist: “Where does music go when you stop playing?”
The other movie to watch before the exhibition is a very recent one, to be seen in the movie theater instead, is Only lovers left alive by Jim Jarmush, just because it might be meaningful to know that in the sky above our heads, a white dwarf star shines and by cooling down its nucleus crystalized into a gigantic trillions carats diamond. A white dwarf star that plays its purest symphony in the universe.
Yet one more thing: while speaking about Saraceno spiders, a friend of ours suggest to read Marc Fumaroli’s book The Bees and the Spiders. The Quarrel of Ancient and Modern, according to which we could guess that Saraceno’s attitude, even when he hybridates spider webs, is closer to that of the bee than the spider one.
Indeed, the modern dogmatic autophagy of the spider, that extracts the material for weaving from inside itself, does not really belong to Saraceno. On the contrary, bees snatch from thousand flowers growing in nature the material they eventually turn into honey and wax.
Like bees and ancient do, Saraceno seems to know that the idea of artistic creation is a romantic fantasy and that working means distilling what one can find and find again, he knows that the work is the result of a process of transformation and elaboration of what preexists and that in any period humanity is nothing but a dwarf on the shoulders of a giant.